Falling under the realm of ASME B31.1, Power Piping Code, main steam (MS) and hot reheat (HRH) piping withstand elevated temperatures and pressures which manifest failure mechanisms, such as long-term-overheating (creep) and fatigue.

And cold reheat (CRH) piping can become susceptible to overstress and corrosion fatigue, among other failure mechanisms. All of these degrade piping over time.

Piping failures are unexpected and usually are costly. In addition to personnel safety risks, the time required to procure and install new piping sections can consume weeks or months of lost generation and revenue.

Although pipe ruptures are rare, their results can be devastating. Should superheated steam have an opportunity to escape from its area of confinement, it would instantaneously flash and expand to more than a thousand times its volume. The resulting shock wave can be tremendous.

Seamed piping presents unique reliability and safety risks. Upon failure, the tendency is for an entire seam to “unzip” and release large amounts of steam. By contrast, when seamless piping fails at a girth weld, a crack typically opens at an isolated location. 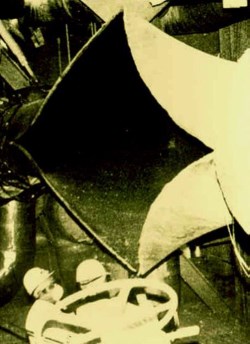 Ruptured seam at the Mohave power plant. Note the workers at the lower left.Commonly referred to “leak before break,” it’s based on the concept that leakage resulting from a girth weld would be detected well before it could reach a size resulting in rupture. Although still a dangerous situation for those in the immediate vicinity, the steam release is “limited.”

The 1985 Mohave Power Plant failure of a seamed HRH pipe, which killed six and injured 10, was one of the first of many catastrophic seam welded failures induced by creep. Additional fatigue cracking failures in cold reheat (CRH) piping and flow-accelerated-corrosion (FAC) among feedwater piping have obligated many to adopt robust condition assessment programs.

Historically, the “Code” prescribed only design & construction practices. It was non-specific regarding in-service maintenance or inspections. Its non-mandatory Appendix V merely suggests that continued examinations be performed. Recently (and most likely resulting from the latest catastrophic failures and an evolving understanding of their mechanisms) ASME introduced a mandatory Chapter VII, “Operation and Maintenance” to the 2007 Code addendum. Plant engineering and maintenance programs are now required to address known mechanisms which cause catastrophic failures among Covered Piping Systems (CPS), previously called High Energy Piping.

The operating company must implement a CPS O&M program plan and conduct observations, preventive maintenance and inspections which proactively identify potential problems prior to failure. Immediate action is necessary where CPS programs are absent. Written procedures are required which emphasize operational modes, failure mechanism identification and documentation among other items.

In particular, O&M procedures need to be available which cover and document:

· Any repairs, replacements or design modifications

· Assessment of degradation mechanisms to include creep, fatigue, graphitization, corrosion, erosion, and FAC among others

· Steam cycle chemistry such as pH and dissolved oxygen

The operating company is to decide the extent of the condition assessment depending on the piping system. At a minimum, design temperatures and pressures, piping material specifications, and piping dimensions are required. And all related documentation is required to be accurate and easily accessible to extend from when the system was placed in service to present day. 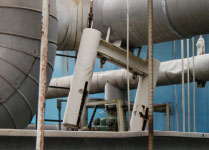 Pipe support damage caused by water hammer. Although this mandate seems stringent, flexibility exists. For those organizations with well-established high energy piping programs in place, perhaps nothing needs to be done. Others may require relatively simple updating. And for those with singular or smaller operations, such as cogeneration plants or many of the newly commissioned heat recovery steam generators, much work may be necessitated.

In any event, a comprehensive review can identify what is missing or needs enhanced. Chapter VII contains requirements, but does not suggest any particular format or official construct. It provides latitude for management to upgrade their program to the degree they deem necessary, so long as it abides by the “Code.” Additional direction is available in Chapter VII of the B31.1 code.

A piping support (hanger) system functions to anchor, guide, restrain, and distribute the load of the suspended piping. Rigid supports restrict pipe movement in normal operation while snubbers are employed to absorb shock under abnormal conditions such as water hammer. Spring supports, variable or constant, accommodate loading and pipe movement due to thermal expansion and contraction.

As Section VII suggests, a hanger maintenance and inspection program is necessary. Hanger positions should be determined on an annual basis and documented during operation (hot) and offline (cold). Actions should be taken to address field anomalies. Any adjustments should be made in the cold condition while the settings are confirmed in the hot condition.

Grade 91 Piping (P91), a modified (Cr-Mo) alloy, was certified for headers and piping in the 1980’s. It contains 9% chromium as compared to 2.5% found in traditional P22 steel. This extra chromium improves high-temperature strength and increases resistance to oxidation and corrosion. The addition of niobium (Nb), vanadium (V) and nitrogen (N), improves its creep-rupture strength.

Many viewed P91 as the solution to the problem of steam piping creep. It rapidly replaced P11 and P22 among conventional steam plants as well as heat recovery steam generators (HRSG) during the boom of combined-cycle power plant construction. For typical main steam piping, an upgrade from the P22 alloy to P91 can reduce piping wall thickness and raise allowable strengths, oxidation limits and thermal fatigue life.

Unfortunately, P91 is highly sensitive to variations in chemistry and heat treatment than are P11 and P22. Any incident during manufacture, construction or operation which disrupts the intended microstructure may compromise its integrity and prevent P91 from achieving its designated creep properties. Significant field welding challenges also exist in terms of backing, preheat and post weld heat treat (PWHT).

And industry experience with P91 has exposed manufacturers, constructors, and plant operators who have mishandled the material and damaged its microstructure. Such damage has led to rapid and premature in-service failures.

One troubling fact is that most of these failures were due to so-called Type IV creep rupture (mid-life cracking), which occurs after as little as 20,000-40,000 hours of service. Failures frequently occur at operating temperatures below the maximum design temperature of 1,100ºF, and can initiate and grow below the surface before emerging. Exacerbating this are the early-life failures among dissimilar metal welds or those improperly heat treated, which have resulted in failures in less than 5,000 operating hours.

By posting a comment you confirm that you have read and accept our Posting Rules and Terms of Use.
Advertisement
RELATED ARTICLES
P91 Piping: A Panacea-Turned-Nightmare for Power Plants?
High-Energy Piping: Where to Inspect?
Heat Recovery Steam Generators: Vulnerable to Failure
Inspections Are Critical for High Energy Piping Safety
Flow Accelerated Corrosion: An Ongoing Risk for Steam Generators
Advertisement