Engineers and professional staff at industrial plants know that raw, intermediate, and final products may be highly corrosive to plant piping, heat exchangers, vessels, and other equipment, as well as to people.

However, corrosion can be just as serious on the water/steam side of the plant. In a series of articles we will examine some of the most important aspects of corrosion that are related to water and steam use in industrial plants and power generation facilities.

The primary metals that we will examine, especially in later parts of the series, are carbon steel, stainless steels, and copper alloys. We begin by outlining the most common corrosion mechanisms.

Corrosion of metals always involves an electrochemical process. But in the case of erosion-corrosion, mechanical influences are also present. Although many different types of corrosion have been discovered (and some have not yet been completely investigated), the following example illustrates the fundamental concepts of corrosion.

Consider a simple laboratory experiment of immersing an iron bar in a hydrochloric acid (HCl) solution. After a few days, corrosion spots will become plainly visible on the bar. The figure illustrates the corrosion mechanism. 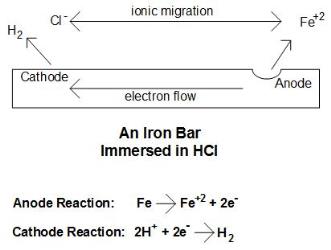 The Fe+2 (ferrous) ions migrate into the solution. This site is known as the anode.

2. The electrons flow through the metal to another site where they react with the hydrogen ions of the acid (reduction) to produce hydrogen gas,

This reaction occurs at the cathode.

3. The anions from the acid, chloride ions (Cl-), and the ferrous ions migrate through solution to produce solvated ferrous chloride (FeCl2). What is evident from this example is that an electrical circuit is completed. Without this electrical circuit, corrosion does not occur.

Another fundamental cathodic reaction, and one that greatly influences water treatment is,

This is the typical cathodic reaction in water containing dissolved oxygen. The hydroxyl ions combine with iron to form ferrous hydroxide, [Fe(OH)2], which further oxides to ferric hydroxide precipitate [Fe(OH)3]. Dehydrolysis of ferric hydroxide produces Fe2O3, which we commonly know as rust.

The following sections outline these mechanisms.

General Corrosion: General corrosion occurs when a metal is attacked uniformly by a corroding substance. The corrosion of active metals by acid is a prime example. Pipes, tubes, and other power plant materials are always designed with a general corrosion safety factor. Since general corrosion is spread over a wide area, metal integrity may remain solid for many years. Unfortunately, many corrosion mechanisms are not general in nature but are localized. These are much more serious.

Pitting: Pitting is a localized form of attack in which the corrosion penetrates down and through the metal. Pitting is an insidious mechanism and may cause failures even when the bulk of the material is still in good shape.

Several types of pitting are possible. One of the most common is under-deposit corrosion, which is a phenomenon that occurs in boilers and cooling water systems. Deposits in cooling water systems generate oxygen differential cells, in which the environment underneath the deposit becomes oxygen deficient in comparison to the bulk solution. This causes the tube metal below the deposit to become anodic to clean surfaces, where oxygen is in good supply. Diagram showing a mechanism of localized corrosion developing on metal in a solution containing oxygen. Image source: WikipediaUnder-deposit corrosion is one of the primary reasons why it is so important to prevent fouling and scaling in water systems. Deposits in boilers may produce oxygen differential cells, or they may trap corrosive materials underneath that attack the boiler tubes directly.

Another form of pitting is an attack common to stainless steels. Stainless steels develop an oxide surface layer that protects the base metal. This oxide layer may be penetrated by impurities in the water. Chloride is a particularly notorious pitting agent, and it will attack some grades of stainless steel, including one of the most commonly used heat exchanger materials, 304 stainless. As the attack continues, the chloride concentration in the pit increases and the pH goes down, further exacerbating the problem.

Remember that although stainless steels are widely used throughout the power, chemical, and manufacturing industries for piping, vessels, heat exchangers, and other equipment, some people assume that stainless materials are bulletproof. This is a myth. If stainless steels are selected improperly or for the wrong application, corrosion failures can occur rapidly.

Crevice Corrosion: Crevice corrosion almost can be thought of as pitting, but in this case a mechanical factor, namely the physical joining together of two metals, leads to sites (crevices) that become oxygen depleted. These sites become anodic to the exposed metal surface and corrode in a similar mechanism to the under-deposit process.

Galvanic Corrosion: Galvanic corrosion occurs when two dissimilar metals are coupled together in a corrosive medium. The more passive of the two serves as a cathode and the more reactive becomes an anode. Galvanic corrosion can be especially severe when a small anode is coupled with a large cathode. One classic example is of copper plates that are connected by steel rivets in seawater service. Corrosion of the rivets can be intense. The reverse situation, namely copper rivets holding steel plates, is better from a corrosion standpoint, as a large anode is coupled to a small cathode. Although corrosion of the steel still occurs, metal loss is less severe.

Erosion Corrosion: Erosion-corrosion is a combination of physical and chemical attack. It occurs when a flowing stream erodes the outer layer of the metal exposing fresh metal to further corrosion. High fluid velocity or disturbances in flow patterns may initiate erosion-corrosion. A special form of erosion-corrosion, flow-accelerated-corrosion (FAC), has caused great concern in the power industry.

Stress Corrosion Cracking: Stress corrosion cracking (SCC) is another mechanical/chemical mechanism. The corrosion occurs at stress points in metals, which are attacked by a specific agent. The 304 and 316 stainless steels offer a good example. When placed under stress in a corrosive environment, such as a solution containing chlorides, the material will begin to corrode at the stress points. Turbine blades are prime locations for SCC, as they are constantly under stress.

Fatigue and Corrosion Fatigue: Breaking a wire by bending it back and forth repeatedly until it fails is an example of fatigue in which failure was caused by cyclical stress. Fatigue-related failures occur commonly at support locations in boilers where, as the tubes heat or cool, stress is placed at the point of attachment. Cyclical stresses are common in rotating machinery, and components may fail by fatigue in such locations. If fatigue stresses occur in an environment containing aggressive chemicals, fatigue failures are often accelerated. The chemical can penetrate metal at fatigue cracks to increase the cracking rate. Intergranular corrosion attack in austenitic cold rolled stainless steel sheet. Image source: Creative CommonsIntergranular Corrosion: Intergranular corrosion occurs along the grain boundaries of metals. This attack is often set up by poor heat treatment of the metal. Improper heating or cooling of an alloy may occur during the fabrication process, or more often, when the material is being welded in the field. The extreme heat generated during welding can alter the crystalline structure of the alloy and reduce corrosion resistance. Many stainless steel failures have occurred due to poor welding, where the heat from the process causes chromium to combine with carbon into small globules. Chromium carbide precipitation reduces chromium’s ability to form a protective oxide layer on the steel surface and opens the way for corrosion.

Dealloying: Dealloying is the selective leaching of one metal from an alloy. Two of the most common forms are dezincification and denickelification of Admiralty metal and copper-nickel alloys, respectively. Although debate exists as to the exact corrosion mechanism, the results are similar: The zinc or nickel departs, leaving a spongy copper mass behind.

Exfoliation: Exfoliation is a readily observable phenomenon as flakes of metal appear on the pipe or tube surface. These flakes will often wash downstream and foul other areas of the steam generating system. Exfoliation may be the result of mechanical factors more than chemical attack. Exfoliation is commonly observed in high-temperature tubes and piping, where the high temperatures generate thick oxide layers. Cyclic operation places mechanical stress on the deposits, and eventually they begin to break loose and transport elsewhere.

Microbiologically Influenced Corrosion: Microbiologically-influenced corrosion, or MIC for short, is a common problem in cooling water systems. Microbes not only form deposits that may cause under-deposit corrosion, but many organisms also generate corrosive chemicals via metabolic processes. Typically, if microbes are allowed to attach to a metal surface and form a colony, the organisms secrete protective slimes for protection. While organisms near the surface may be aerobic because oxygen is present in the cooling water, the colonies underneath consist of anaerobic bacteria. These organisms live by using minerals in the water, and the byproduct of their metabolic biochemistry may include sulfuric acid, hydrogen sulfide, and other nasties. Localized attack and pitting are the result.

Part 2 will discuss some of the primary metals and their reaction to corrosive mechanisms. In Part 3 we will examine corrosion issues, and include a discussion of methods of control.

By posting a comment you confirm that you have read and accept our Posting Rules and Terms of Use.
Advertisement
RELATED ARTICLES
7 Forms of Piping Corrosion and How to Prevent Them
Delaying the Inevitable: Marine Corrosion Prevention
Cooling Water Corrosion and Its Control:Part 1
Leveraging Mini-mills for Superalloy Performance, Prototyping and Research
Don’t Neglect Closed Cooling System Water Treatment
Advertisement