Part 2 of this series emphasized that most of the materials in modern steam generators are steel based.

Materials may range from mild steel in condensate/feedwater systems and waterwall tubes to high-alloy steels in superheater/reheaters and turbines. Alloying elements obviously have a strong impact on corrosion mechanisms that can affect the various steels. In Part 3 we will examine corrosion issues, and include a discussion of methods of control. Corrosion is quite a complex science, with steam generation corrosion being just one part of a huge mosaic.

Iron is an amphoteric metal, meaning that both low and very high pH solutions will cause corrosion. Part 1 of this series outlined the basic corrosion mechanism in acid. At the temperatures common to the condensate/feedwater system and steam generator, general corrosion is minimized at a mildly basic pH.

For typical heat recovery steam generators (HRSGs) at combined-cycle plants, the recommended feedwater pH range is 9.6 to 10 (as measured at 25oC). The most common chemical used for feedwater pH control is ammonia (NH3), a weak base that generates hydroxyl ion (OH-).

Because feedwater is pure (or always should be), a common method to control ammonia feed is from specific conductivity (S.C.) readings, as in pure water a direct correlation exists between S.C. and pH, with S.C. being much easier to measure.

Beyond pH, however, another issue has arisen regarding flow accelerated corrosion (FAC). A future article will cover that topic, but it is worth mentioning here that in the condensate/feedwater systems of modern HRSGs (virtually none of which contain copper alloys) a small amount of dissolved oxygen (5 to 10 ppb in the feedwater) is required to generate the proper protective oxide surface on carbon steel. As we will review in that future article, FAC is an extremely serious issue.

From a materials aspect regarding FAC control, fabrication of FAC-susceptible components with P11/T11 or P22/T22 (1¼ and 2¼ chromium concentration, respectively) should be a standard consideration for all new HRSGs.

Yet another important subject, which requires a separate article for full discussion, is steam generator corrosion control when the unit is off-line. In these cases, oxygen is an enemy, and air in-leakage to cold units standing full of water can cause damaging corrosion.

A technology for corrosion protection that has been known for decades and is now re-emerging, is filming amine use. Amines are organic compounds with one or more ammonia groups attached. (Some small chain amines, known as neutralizing amines, are used in place of or along with ammonia as pH-conditioning agents.)

The amine groups and perhaps other functional groups on the chain attach to metals, while the hydrophilic organic chain establishes a barrier to water. In recent years, some positive results have been seen in full-scale tests of these products. Potential drawbacks still remain, including organic breakdown in high-temperature steam. Organizations such as the Electric Power Research Institute (EPRI) continue research into these products.

The ammonia (or perhaps neutralizing amine) used for condensate/feedwater conditioning can provide enough alkalinity to also protect the steam generator proper, as long as impurity intrusion is prevented. But condenser tube leaks will introduce a variety of contaminants to the condensate and the steam generator, including scale-forming ions and also chloride and sulfate, among others. The latter, and chloride in particular, can generate acids that quickly consume ammonia and leave the steam generator in a vulnerable condition.

So, basically from the advent of high-pressure power production, most steam generators (and here we are only examining drum-type boilers and HRSGs) are treated with an additional pH-conditioning agent. Most common has been tri-sodium phosphate (Na3PO4), which generates alkalinity as follows:

A common recommended pH range for high-pressure HRSG evaporators is 9.2 to 9.7. [1]

Phosphate will also react with hardness ions to prevent them from forming hard scale in the steam generator, but unfortunately, TSP has some drawbacks that limit its effectiveness. One of the most notable is its reverse solubility at high temperatures. 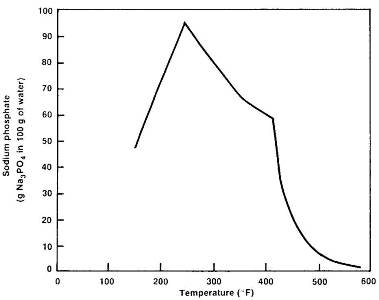 Tri-sodium phosphate solubility vs. temperature. Source: Ref. 2, original source EPRI.The compound cannot be dosed liberally, as most of it precipitates directly on boiler internals. Compounding this issue is that the TSP can react directly with the boiler tube material to form iron-sodium phosphate compounds. For these reasons, chemists at some plants have adopted straight caustic (NaOH) feed as the method to establish boiler water alkalinity. However, due to iron’s amphoteric nature, the caustic concentration must be limited to a maximum of 1 part-per-million (ppm).

At this point, another factor must be considered. Even in systems with good feedwater chemistry, iron oxide corrosion products still are generated and travel to the steam generator. At the high boiler temperatures ,the particulates precipitate, generally on the hot side of the tubes. Deposition sets up porous deposits, where water can penetrate the deposits through various channels.

An illustration of wick boiling.As the water approaches the tube surface, temperatures increase. The water boils off, leaving impurities behind (wick boiling). The contaminants can concentrate to very high levels. One of the most frightening reactions possible is shown in the following equation:

As can be seen, a product of this reaction is hydrochloric acid. While HCl may cause corrosion in and of itself, the compound will concentrate under deposits, where the reaction of the acid with iron generates hydrogen, which in turn can lead to hydrogen damage of the tubes. 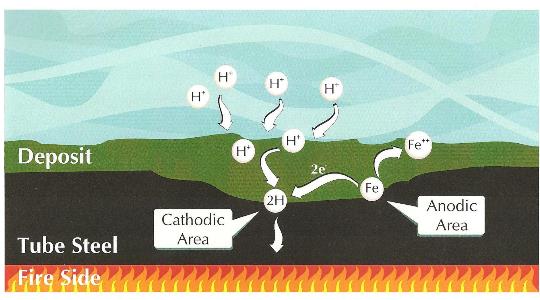 Under-deposit acid formation. Illustration courtesy of Ray Post, ChemTreat.In this mechanism, atomic hydrogen penetrates into the metal where it reacts with carbon atoms in the steel to generate methane (CH4). Formation of the gaseous methane and hydrogen molecules causes cracking in the steel, greatly compromising its strength. Hydrogen damage is troublesome because it cannot be easily detected. After hydrogen damage has occurred, plant staff may replace tubes only to find that other tubes continue to rupture. [3] 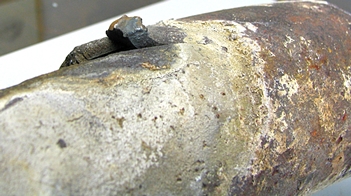 A tube failure due to hydrogen damage. Notice the thick-lipped fracture, indicative of failure with little metal loss. Photo courtesy of ChemTreat.For many decades, hydrogen damage has been at or near the top of the list of high-pressure steam generator corrosion mechanisms. What power plant personnel often fail to recognize is that even small condenser tube leaks (or other impurity ingress), if they are chronic, can allow repetitive under-deposit corrosion and hydrogen damage.

Under-deposit corrosion is not limited to low pH conditions. Per the wick boiling example outlined above, another compound that can concentrate within deposits is caustic. Concentrations may rise to levels many times that in the bulk boiler water. The concentrated NaOH attacks the boiler metal and its protective magnetite (Fe3O4) layer via the following reactions:

The potential for under-deposit caustic gouging is the primary reason why the free caustic concentration in the boiler water is typically limited to 1 ppm.

The reader will have observed a number of important items in this discussion, but several takeaways should be emphasized.

• The amphoteric nature of iron requires pH control within a rather narrow window.

• Deposits that accumulate within the steam generator greatly influence the corrosion potential due to their ability to allow concentration of impurities. That is why regular chemical cleaning is important, although this can be a difficult task in HRSGs with the complex evaporator tubing.

• Proper feedwater chemistry control is required not only to prevent FAC, but also to minimize carryover of particulates to the steam generator.

• Units should not be operated with condenser tube leaks unless the condensate system is equipped with a condensate polisher.

A Note on Steam Chemistry

Space did not permit a discussion about steam chemistry, but it is highly important. In fact, many of the guidelines for boiler water chemistry have developed around the prevention of impurity carryover to the steam system and turbine. The corrosion mechanisms that certain impurities can induce include pitting, stress corrosion cracking, and corrosion fatigue.

By posting a comment you confirm that you have read and accept our Posting Rules and Terms of Use.
Re: Engineer's Guide to Corrosion: Part 3
#1

Whenever I play this game I feel without stress hearts play online found my self awesome and addictive I love this game I like this game it very relaxing.

Re: Engineer's Guide to Corrosion: Part 3
#2

I must say your blog is astonishing. The clearness in your post is really amazing and I can admit you are a professional about this topic. You rock! Please go on with your mind blowing effort. See to buy essays. Thank you for such concern for your readers. You know very well that what readers really look forward to your posts. You never let down your readers instead you energize them. You build an oddity in their mind by your title itself. Go further on. God bless you!

Re: Engineer's Guide to Corrosion: Part 3
#3

Need a reliable service to order a paper from? Check out our https://essaytopicsmasters.com/reviews/homeworkmarket-com Review on EssayTopicsMasters. We have only real reviews about legit and scam writing services.

Re: Engineer's Guide to Corrosion: Part 3
#4

My tutor helped me a notable deal today with my fluency in speaking with a few reading classes, even letting me repeat after her with a purpose to recognize how I should sound. Before this lesson, the task of sounding greater like a herbal speaker become very daunting to me. I now look forward to practicing it greater. Thanks bestessays review a lot.