Part 1 of this series provided an overview of a number of the most common corrosion mechanisms that can occur in steam generators at power and industrial plants. Here, in Part 2, we focus on the most common materials in these systems because an understanding of material constituents is needed for subsequent corrosion study.

The universal material for condensate/feedwater piping and boiler waterwall tubes is mild carbon steel, as this material often offers the best combination of strength and price. A transition from the mild steels to higher-strength alloys, including the ferritic and austenitic steels, is needed in superheaters and reheaters where temperatures are higher and the density of the cooling medium is much lower. The table outlines the chemical composition of the most common materials employed for steam generator fabrication.

In considering materials for condenser and feedwater heater tubes, current practice calls for all-ferrous alloys, usually stainless steel. Some older power-generating units still have heaters and/or condensers with copper alloy tubes. Most common are Admiralty metal (70% copper, 29% zinc, and 1% other alloys, primarily arsenic or phosphorous), and the copper-nickel alloys, notably 90-10 and 70-30.

Turbine rotors and blades are composed of high alloy steels. Typical for turbine blades is 403 SS, which contains 12% to 13% chromium. A popular material for modern supercritical plant turbine blades is type 422, 12 Cr ferritic steel. HP turbine rotors are often ferritic steels containing 1% to 13% chromium and some nickel, molybdenum, and vanadium.

At first glance, the numerous elements that make up the steels outlined in the table may be bewildering. Most are alloying elements to improve various properties (toughness, resistance to heat, and so on) of the steel, while a few are impurities whose content must be carefully controlled.

Carbon: Carbon is the alloying element that defines steel, as opposed to plain iron. As stated in Reference 2, it is the “most important alloying element in steel.” Carbon increases the tensile and yield strengths of steel, although it also lowers the ductility and toughness. As is evident in the table, a relatively small percentage of carbon is necessary, and indeed will dissolve in steel, for alloying purposes. Above about 2% concentration, the element forms carbon nodules in the metal; these are the cast irons, whose ductility and strength decrease with increasing carbon content.

Chromium: Chromium is the element that in 12% concentration or greater imparts the “stainless” quality to stainless steels. The chromium causes steel to form a layer of chromium oxide that protects the steel from its environment (but with cautions to that chemistry as will be outlined later). However, even at lower concentrations than 12% chromium benefits also may be derived, including greater strength and toughness, and improved resistance to creep and oxidation at high temperatures. (Creep is the deformation of steel at elevated temperatures.) Also, even small amounts of chromium provide increased resistance of steel to flow-accelerated corrosion (FAC). [3] Both single-phase and two-phase FAC have plagued many steam generating systems where some failures have caused fatalities.

Nickel: Nickel improves toughness and in certain cases corrosion resistance of steel. But, it is most important when alloyed at 8% concentration or higher, as at this concentration and above, nickel causes the steel to assume the austenitic structure. 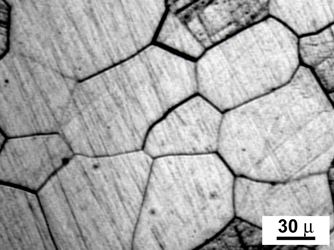 Illustration of metal grains. Source: Wikipedia.Grain size may vary depending on the metal or alloy and fabrication methods, for example, fast cooling, slow cooling, subsequent heat treatment. We will examine grain behavior later with regard to some special corrosion issues. For example, grain boundaries often serve as corrosion sites.

The crystalline structure of the metal within grains is also important. For the mild steels and even those that contain significant chromium, but without nickel, each unit cell of the crystal has a body-centered cubic structure, as shown.

In some cases, austenite offers better mechanical properties than ferrite. The addition of 8% or greater nickel to steel as an alloying element allows the steel to remain as austenite at room temperatures and below.

The face-centered cubic structure. Source: Wikipedia.The table may now become more understandable with regard to the crystal structure of each of the steels. A third structure, martensite, can also be produced by special treatment, but it will not be considered here. However, note that a relatively new type of steel, the duplex alloys, are being used in some applications. These consist of a combination of ferrite and austenite. The duplex alloys offer some advantages, but at least one spectacular failure mechanism is known, in an air pollution control application, which will be outlined in a later article.

Molybdenum: Molybdenum increases steel’s strength and resistance to wear, among other benefits, but also contributes to high temperature strength.

Others: Elements like silicon and manganese can help protect steels against oxidation and problems related with residual sulfur in the steel, respectively. Phosphorus in low concentrations can increase steel hardness, but becomes troublesome in higher concentrations than those shown in the table. Other trace elements that may be beneficial, depending upon the alloy, include aluminum, boron, columbium, copper, nitrogen, niobium, and tungsten.

The components of a high-pressure steam generator are subject to a number of mechanical stresses, including tensile, compression, and others. These often occur at attachments such as supporting infrastructure and tubing connections at headers, drums, and similar locations. Stressed locations are often greatly influenced by the high temperatures during normal operation and cyclic issues when units are reduced in load or come off-line, as has become much more common in recent years.

Several stresses will come into focus in later corrosion discussions. For example, some components that cycle frequently may fail from simple fatigue. Tube attachments are classic locations for fatigue. Corrosion fatigue, as the name implies, involves structural weakening by fatigue that then allows corrosive agents to accumulate in the weakened area, usually a small crack, and then increase the corrosion rate. Stress corrosion cracking (SCC) can occur in components; turbine blades are a prime example, in which normal operation induces stresses that allow corrosion to occur.

Another common phenomenon in steam generators is the deformation known as creep. Materials begin to lose strength at elevated temperatures; the ultimate example may be if the metal is taken to its melting point. But even at temperatures well below the melting point, the combination of heat and stress will cause metals to deform.

Very common to high-pressure steam units, and especially in superheaters and reheaters, is long-term creep. Over time, the material may deform or elongate to the point of failure. Corrosion often may play a part in long-term creep, particularly if corrosion products inhibit heat transfer. At the opposite extreme, if corrosion or some other mechanism causes a partial or full blockage of fluid flow in high-temperature water or steam-bearing tubes, short-term overheat may be the result. 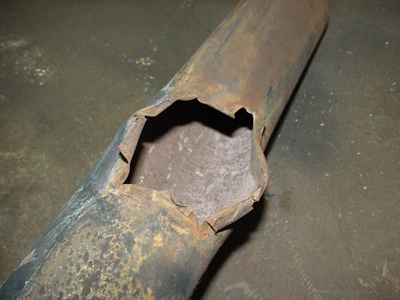 Rapid tube failure. Note the thin-lipped structure at the failure. Source: ChemTreat.Such dramatic failures may be corrosion/chemistry related, but also may be induced by operational upsets. In coal-fired power plants, firing a unit too rapidly is one possibility. Another, which has occurred over the years, is neglecting drum level during operation and allowing portions of waterwall tubes to go dry.

In Part 3, we will examine primary corrosion mechanisms and their control in greater detail. These issues are too-often overlooked, sometimes to the point of a catastrophic failure.

By posting a comment you confirm that you have read and accept our Posting Rules and Terms of Use.
Advertisement
RELATED ARTICLES
Finding the Optimal Metal Tubing for Medical and Critical Applications
Boiler Failure Mechanism: Long-Term Overheating
Top tips: Choosing the right grade of stainless steel
Heat Treatment of Bolts and Fasteners for Demanding Applications
Engineer's Guide to Corrosion: Part 1
Advertisement