U.S. electricity production exceeded 4 trillion kilowatt-hours in 2015, and the projected demand is up and to the right. The bulk of existing production relies upon coal and natural gas fuels, with nuclear power and renewables (including wind, hydro and solar) supplying the balance. Approximately 7,000 fossil plants currently supply two-thirds of all electricity production.

Conventional steam plants convert fossil fuels into thermal energy to boil water and generate steam. A system of piping conveys this steam to rotate the turbines which drive electric generators. The piping which transports this high-energy steam is subjected to elevated pressures and temperatures (greater than 1,000ºF).

As the service age of high energy piping (HEP) approaches and exceeds 20 years, long-term overheating or “creep” emerges as a primary failure mechanism. Creep damage within HEP, especially longitudinal seam-welded piping, is prone to cause catastrophic failure and inflict great damages to people and property. 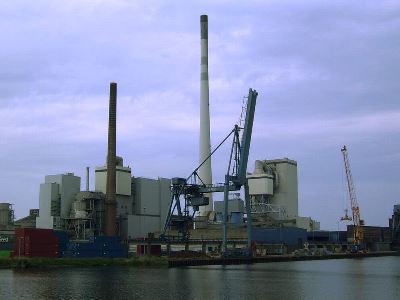 Conventional steam plants use a system of piping to convey the steam to rotate turbines that drive electric generators.Material selection is paramount in steam piping design, as the metallurgy needs to resist creep at elevated temperatures. Carbon steels containing chromium and molybdenum (Cr-Mo) have been effective in fighting creep and oxidation since the 1950s with the utilization of grades P11 and P22 piping. Despite the increases in steam temperature and thermal efficiencies afforded by these ferritic steel breeds, a rash of catastrophic accidents occurred in the 1980s and 90s. In particular, premature piping failures among longitudinal seams of the Mohave, Monroe and Mount Storm generating plants all occurred well in advance of their designed life cycle. Understandably, concern spread across the industry, and an increased emphasis was placed on piping inspections to identify creep. Efforts also were made to improve the design of new-build and retrofit piping.

In step with the use of P11 and P22 was the development in the 1970s of Grade 91piping (known as P91), a modified (Cr-Mo) alloy first developed for nuclear reactor applications. P91 exhibits enhanced creep rupture strength, yield strength, ultimate tensile strength and toughness. It contains 9 percent chromium as compared to 2.5 percent found in P22. This extra chromium improves high-temperature strength and increases resistance to oxidation and corrosion. The addition of niobium (Nb), vanadium (V) and nitrogen (N), improves its creep-rupture strength.

In short, P91 enables elevated temperature operation, better lifetime performance and thinner materials in the design and manufacture of piping systems. Modified 9Cr-1Mo was certified in the 1980s as ASTM A/Sa 335 Grade P91 for headers and piping. Many viewed P91 as the solution to the problem of steam piping creep. This explains P91’s rapid and widespread use as a replacement for P11 and P22 steels among conventional steam plants as well as plants equipped with a heat recovery steam generator (HRSG). In particular, Grade 91 materials were viewed by the booming combined-cycle power plant industry as a panacea for the thermal fatigue that plagued large HRSGs operating in cycling duty.

For typical main steam piping, an upgrade from the P22 alloy to P91 can:
• Reduce wall thickness by nearly two-thirds and component weight by 60%
• Raise allowable strength in the 950ºF - 1100ºF range by up to 150%
• Raise the oxidation limit by 100ºF, enabling a lower corrosion allowance
• Increase thermal-fatigue life by a factor of 10 to 12. 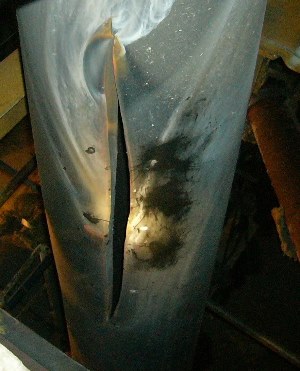 A rupture along a piece of P91 piping.Unfortunately, because P91 was first used within large-bore piping components, many complications have been revealed. P91 is more sensitive to variations in chemistry and heat treatment than are P11 and P22. Piping failures have continued, in large numbers, despite P91’s perceived superiority. Troubling is that most of these failures were due to so-called Type IV creep rupture (mid-life cracking), which occurs in as little as 20,000-40,000 hours of service.

More troubling is that Type IV failures frequently occur at operating temperatures that are lower than the maximum design temperature of 1,100ºF, and can initiate and grow below the surface before emerging. Most troubling among the recent boom of combined cycle P91 installations are the early-life failures. HRSG operators have experienced failures in dissimilar metal welds in less than 1,000 operating hours. Poor weld geometry or inappropriate heat treatment have resulted in failures in less than 5,000 operating hours.

Unlike carbon and low-alloy steels, the improved creep strength of P91 relies upon achieving and maintaining a specific microstructure. This precise microstructure is produced by the transformation to martensite and is attained during the cooling process. Virtually any incident during manufacture, construction or operation which disrupts this microstructure will compromise the material’s integrity and prevent it from achieving its designated creep properties.

P91 materials also provide significant field welding challenges in terms of backing, preheat and post weld heat treat (PWHT) with little margin for error. Industry experience with P91 has exposed purchasers, manufacturers, constructors and plant operators who have mishandled the material and damaged its microstructure. Such microstructural damage often leads to rapid and premature failures. Many maintenance personnel have performed localized heating on P91 with oxy-fuel torches, which impose destructive, non-uniform heating. Another frequent error has been to follow incorrect PWHT procedures, including incorrect temperatures and variations or temperature durations. Perhaps worst of all, some contractors repair P91 components without performing any PWHT.

Unfortunately, current codes lack the breadth to address all of the material-processing demands and prevent continued Grade 91 issues. But after more than 20 years of failures, changes are finally afoot. Task forces have been formed among users groups and industry organizations such as the Electric Power Research Institute (EPRI) have taken up the cause. Safety concerns among plant owners have prompted efforts within ASME to brush up its Boiler & Pressure Vessel Code.

But for owners of aged Grade 91 materials, the best advice may be to assess risk locations and conduct prioritized inspections to determine the next steps: operate, repair or replace. To assess current risk, perform positive material identification (PMI) and contact the supplier, the mill or the manufacturer to request validation markings, heat number, size and quantity. For repairs, pay close attention to any and all heat treatment activities to ensure that the correct microstructures have developed and are maintained. Finally, when building or replacing, pay close attention to how the material is ordered, processed and inspected to determine its condition.

By posting a comment you confirm that you have read and accept our Posting Rules and Terms of Use.
Advertisement
RELATED ARTICLES
Mitigating the Risk of High-energy Piping Failure
High-Energy Piping: Where to Inspect?
Heat Recovery Steam Generators: Vulnerable to Failure
In Praise of Boiler Engineers
Boiler Failure Mechanism: Long-Term Overheating
Advertisement