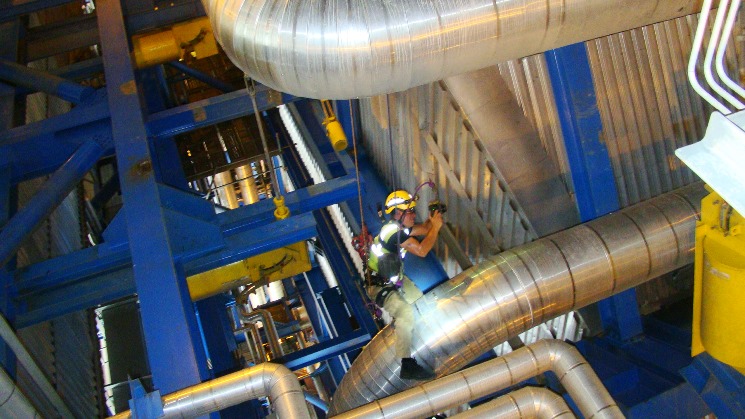 High-energy piping (HEP) loosely defines piping that operates at elevated temperatures and pressures. In general, the label applies to those systems with concern for component failure, personnel safety and collateral damage. Among electric power plants, these systems typically consist of the main steam, hot reheat and cold reheat piping. Boiler external piping, outlet headers and feedwater discharge piping are also included. In layman’s terms, power piping consists of long thin pressure vessels that operate at extreme pressures and temperatures. These pipes connect one large piece of equipment to another and facilitate the steam cycle flow among its various processes. 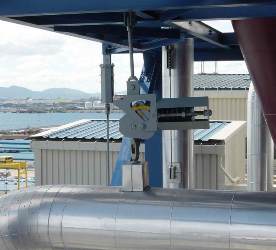 A typical main steam pipe that runs from boiler to turbine can heats up from ambient temperature to 1,050F. This temperature change causes the 100-yard-long pipe to expand by approximately 30 inches, although the change in pipe length is more conspicuous than changes in its width. Imagine if this pipe was not being permitted to expand or contract freely; the force created in preventing the expansion would cause considerable damage to the pipe or even whatever stands in its way.

Adverse consequences arising from improper hanger performance include unpredictable stress and elevation changes within the suspended piping. Problem areas are often the result of root causes acting independently of one another or in various combinations. Generally, the root causes of failure with hangers and their associated piping include:

Excess stress levels in piping systems are of chief concern. Crack propagation or even through-wall cracking develops from bending moments around the circumference of the pipe. This has the potential to result in sudden and catastrophic failure. Moreover, unsuspected changes in elevation arise from poor hanger performance and can affect pipe pitch to an extent that drain lines may become ineffective or obsolete. 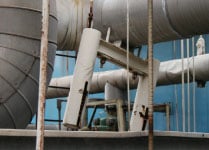 Unfortunately, hangers and their significance are commonly overlooked. An “out-of-sight, out-of-mind” mentality develops as day-to-day power plant operations take center stage. Paradoxically, hanger reliability is a chief driver of their neglect. Seldom do hangers ever attract attention due to their breaking or becoming detached. Although engineered with robust safety factors, their potential threat can be masked with false confidence. Hangers are menacing insofar as they can initiate systemic piping problems without being the suspected culprit. When obvious issues do emerge with individual hangers, they are typically long-term or chronic in nature.

The possibility of catastrophic failure must be recognized and mitigated through an effective hanger maintenance program that includes regular and effective hanger inspections as a key component. As power plants age, the integrity of HEP systems becomes a growing concern. The sudden release of high-pressure, superheated steam could result in catastrophic damage to plant equipment, lengthy lost production and personnel injury.

Hanger inspections are necessary to:

Certainly, the design, maintenance and inspection history of the piping system also requires documentation and review. In-situ load testing of suspect hangers along with piping stress analyses may be performed to identify locations of high vulnerability.

Such activities provide the required knowledge to make sound operational, maintenance, inspection and testing decisions to ensure safe and reliable piping systems. Guidelines regarding hanger inspections are outlined in various codes, regulations and standards, including ASME B31.1 and ANSI/NB-23.

A chief requirement is to understand the original design of the piping system and the purpose of each individual hanger prior to inspection. An understanding of the data sheets, drawings and specifications should paint a picture of how the system should operate. Doing this upfront helps the inspector to focus on what is different at the time of inspection. An isometric sketch should be crafted depicting the configuration of the piping and the approximate location of the hangers. An associated log sheet should also be available to list the design or nameplate data, indicator position readings and general observations. Walk-downs shall occur in both the hot or operating mode as well as in the cold or shutdown condition.

Visual hanger surveys are the key first step to assessing HEP system condition. Topped out, bottomed out or stagnant pipe supports are a sign of elevated stress, which is the contributing factor of numerous damage mechanisms. Elevated stress causes loads to be shifted to adjacent piping sections. Load shifts make it difficult to locate elevated stresses and their magnitude. High stress in one location may impact a hanger in another location altogether.

Hanger and restraint systems should be observed to ensure: 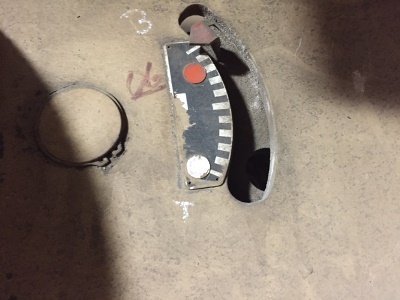 A “bottomed-out" hanger.The position of the spring coil must be checked to determine the amount of compression. When the indicator confirms lack of compression to its proper design position, this means something has changed and must be investigated. A bottomed-out spring indicates a coil is completely compressed and can only move in one direction. Upon observation of all spring coil positions, the system’s status then can be analyzed. An analysis of the total system is needed to determine whether adjustment or replacement is merited.

Of importance is the accuracy and consistency of hanger readings. At first glance, obtaining hanger readings appears straightforward. Starting at the boiler outlet, the system is walked to the turbine leads. Each hanger’s position indicator is viewed and recorded. Unfortunately, many hangers are regularly out of sight, which means that making sense of their positions is almost impossible. Even equipped with binoculars, inspectors frequently cannot see where position indicators are located on hangers that are away from walkable grating or catwalks. Unless scaffolding is erected, inspectors either omit or “guesstimate” unobtainable hanger readings. Regrettably, years or even decades can elapse without knowing the true position of some hangers. This can prove costly when analyses are performed with partial or incorrect data. It proves negligent when hangers are unknowingly “topped” or “bottomed” out.

Hanger readings should be documented and compared with previous readings. Deviations and trends should be recognized. The resulting values then may be used to perform piping stress analyses, from which problems can be identified and their locations known. More costly and time-consuming inspection efforts then can be focused toward locations of high priority.

Crews often can mobilize in a fraction of the time required for scaffolding erection and perform initial surveys, collect detailed inspection data and perform maintenance tasks. The same team often can facilitate emergency repairs within the same mobilization, reducing the impact on shutdown schedules. Rope access techniques have gained a foothold in the power generation sector. It has grown beyond visual inspections to include NDE activities, complete hanger change-outs and code weld repairs.

By posting a comment you confirm that you have read and accept our Posting Rules and Terms of Use.
Advertisement
RELATED ARTICLES
Mitigating the Risk of High-energy Piping Failure
High-Energy Piping: Where to Inspect?
Compact Wellhead System Maximizes Uptime and Reduces Costs
Disaster in Kansas City: A Lesson in an Engineer’s Responsibility
ASME standards take the pressure off nonmetallic pressure piping projects
Advertisement