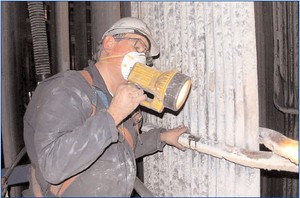 visual inspections or localized tube thickness measurements can yield enough useful information to provide general information.Although a variety of boiler failure mechanisms seem unavoidable, it’s important to acknowledge that some components can endure their design life without failure. The boiler engineer must understand which risks pose the greatest availability threats and which forms of inspection are most practical in determining failure mechanisms and root causes for specific components. He or she must also consider the cost of inspections, those which provide the most useful information and which yield the best “bang for the buck” (or euro, yen, etc.).

Although full-blown boiler condition assessments are advisable in forecasting remaining useful life (RUL), their level of exhaustive investigation are not required for routine boiler inspections where failure mechanisms and repair methods are known. Instead, limited activities such as visual inspections or localized tube thickness measurements can yield enough useful information to provide general information. In contrast, when failure mechanisms are unconfirmed or component end-of-life is near, comprehensive inspections are justified. Specialized NDE, requiring expert interpretation, or tube sample removal for off-site metallurgical evaluation become necessary.

The critical pressure parts of the utility boiler must be assessed periodically. These include drums, headers, high-energy piping, feedwater heaters, deaerator components, and attemperators. Unexpected failures among any of these components will likely result in forced outages or even risk to personnel safety. Other components such as air heaters, fans, burners, pulverizers, refractory, and structural supports adversely affect boiler performance as they deteriorate with age.

By far, however, boiler tube failures (BTF) emerge as the primary cause of forced outages throughout the industry. Their failure mechanisms fluctuate from incipient to chronic. And demands, such as alternate fuels and cyclical operation, exacerbate and accelerate failure modes. To defend against heightened risks of untimely outages and premature component replacements, boiler engineers must regularly schedule boiler tubing components for proactive and effective inspections.

As a general guide, here are some of the most useful and practical inspection methods among utility boiler tubing:

Thermocouple data offers historical trends of specific component temperatures. Superheater and reheater tubing temperatures can be determined from the inlet and outlet header thermocouples. Although located outside of the gas path and within the boiler penthouse, the corresponding temperature data can help determine so-called “Larson-Miller-Parameter” values and remaining useful life estimates.

Although much can be observed with the naked eye, equipment such as boroscopes can identify chemistry related issues, such as pitting, or restrictions internal to the tubing. Positive material identification (PMI) guns can verify tube metallurgies. Even drones are now being used to inspect boilers. 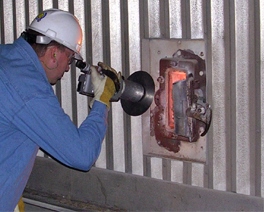 Since the progression of internal oxide scale is a function of time and temperature, the oxide thickness serves as an indicator of the tube’s average metal temperature and projects remaining creep rupture life. Baseline oxide thickness measurements should be executed early in the component life. Measurement locations should include sites of elevated tube metal temperatures, such as near metallurgical transitions. Remaining creep rupture lives can then be calculated to compare with subsequent localized oxide measurements.

Additionally, UT serves as a valuable follow-up to visual inspections among steam-cooled tubing such as superheater and reheater components. Any suspicions of wall loss, due to sootblower erosion or extensive flyash erosion, should be evaluated.

Numerous other specialty NDE processes exist. Their preference varies upon the suspected failure mechanism(s), the material geometry, and access limitations. Certainly, for large-bore piping, replication, phased array ultrasonic or time-of-flight diffraction may be favored to identify creep. When piping access is restricted, such as through insulation, pulsed eddy current could be ideal. For confined inspections, as with heat exchanger tubing, simple eddy current testing is likely the chosen method to identify internal pitting.

Destructive testing also is occasionally required. When water chemistry is suspected of influencing failures or boiler chemical cleaning may be required, furnace tube samples should be extracted for deposit analysis. Similarly, when a newly replaced component starts popping tubes, the cost associated with removing and sending samples for metallurgical analysis can be more easily justified. Determining an unknown failure mechanism and mitigating its root cause such that repeat failures disappear, can be priceless.

By posting a comment you confirm that you have read and accept our Posting Rules and Terms of Use.
Advertisement
RELATED ARTICLES
Boiler Failure Mechanism: Long-Term Overheating
In Praise of Boiler Engineers
Heat Recovery Steam Generators: Vulnerable to Failure
Acoustic Monitoring Can Offer Early Warning of Trouble
Feedwater Heaters: Not to Be Ignored
Advertisement