U.S. Sandia National Laboratory researchers have demonstrated the use of a solar-powered hot air balloon for 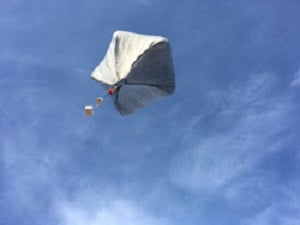 A solar-powered hot air balloon taking flight bears sensors including a GPS tracker and reusable infrasound sensor. Photo courtesy Sandia National Laboratoriesdetecting infrasound, which is sound of very low frequencies, below 20 hertz and not audible to humans. The balloon is assembled in three hours’ time with about $50 worth of materials, including plastic sheets, packing tape, string, a small box and charcoal dust to heat air inside the balloon and provide lift.

A fleet of five solar-powered balloons was launched in July 2017 and reached a height of 13 to 15 miles, twice as high as commercial jets. Equipped with a reusable infrasound sensor and GPS tracker, the balloons detected the infrasound from a test explosion. Infrasound is one of the verification technologies used by the international community to monitor explosions, including those caused by nuclear tests. The balloon system is seen as an improvement over traditional ground-based sensor arrays, which don’t cover the open ocean and can be muddled by other noises, such as the wind.

The five balloons formed a 3D array of sensors, including five microphones to determine the direction of sound wave origin. Researchers coordinate the information from multiple arrays to triangulate the source of the sound. The balloons can be launched on partly cloudy days and remain aloft in the stratosphere all day and come down after the sun sets. The researchers are now developing balloons that can stay aloft at night by use of an insulator on top and absorber on the bottom to absorb heat from the Earth.

In addition to potential nuclear treaty monitoring and national security uses, the team hopes to fly hot air balloons in non-terrestrial experiments and is assisting a NASA Jet Propulsion Laboratory project to explore the possibility of using balloon-borne infrasound sensors on Venus to listen for Venus-quakes. Another possibility is flying infrasound sensors on Jupiter, the gas giant with open scientific questions about its internal structure and geology that infrasound could help answer.

By posting a comment you confirm that you have read and accept our Posting Rules and Terms of Use.
Advertisement
RELATED ARTICLES
Report: US military testing mass surveillance solar-powered balloons
Watch: Volcanic Infrasound Changes May Signal Eruptions
Lighter-than-air drones: From blimps to balloons
Video: Balloons Are Headed to Puerto Rico for Telecom Service
Study: Humans can be encouraged to take risks by robots
Advertisement