The first part of this article examined several of the most important corrosion issues that can affect combined-cycle and co-generation steam generators. The discussion conveyed the importance of steam generation chemistry, especially for high-pressure units, where even a single failure can potentially be of huge financial impact and also expose plant employees to safety issues.

The key to ensuring that proper chemistry is maintained within the steam generator requires the use of continuous, on-line chemistry analyses, coupled with personnel either on-site or on a consulting basis who understand the data and can act both in normal times and in times of difficulty. Some chemistry upsets have been known to cause massive failures within a matter of days and even hours. A question to answer is, “What are the critical samples and parameters for these personnel to monitor?”

For our discussion, we will use a common steam generator in the combined-cycle power industry, a triple-pressure heat recovery steam generator (HRSG) with a feed-forward low-pressure (FFLP) arrangement. The basic schematic of this system, along with numerical designations for the important sample points, is shown in the diagram. 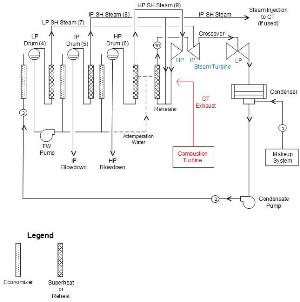 (Click to enlarge.) Triple-pressure, FFLP HRSG with sample points highlighted and discussed in the text. Image source: Author based on Ref. 1.The FFLP designation comes from the fact that all of the feed water to the intermediate- and high-pressure (IP and IP) HRSG evaporator circuits is pre-heated in the LP circuit. A small amount of steam may be generated in the LP circuit.

Several points from Part 1 are critical as we examine the priority measurements from each sample point. These are:

· General corrosion throughout the system is minimized at moderately alkaline pH. Ammonia (or sometimes an amine) is injected downstream of the condensate pump discharge (CPD) to raise the pH. For the high- and intermediate HRSG evaporator circuits, most common is a supplemental addition of tri-sodium phosphate or caustic to provide additional alkalinity. Operation at alkaline pH also helps to minimize flow-accelerated corrosion (FAC), which most commonly occurs in the LP sections of the HRSG.

· Even seemingly minor impurity ingress from a condenser tube leak or makeup system upset can result in problems in the evaporator circuits, and particularly the HP circuit. Most notably, chloride can induce under-deposit hydrogen damage.

· Steam chemistry monitoring is important, as even trace concentrations of impurities can cause deposit formation and corrosion in superheaters, reheaters, and most importantly, steam turbines.

The following sections discuss the sample points shown in the illustration, and outline critical sampling parameters for each.

Makeup Treatment System Effluent: The type and complexity of a makeup treatment system depend (#1 on the diagram) on the requirements of the steam-generating system. For medium- and high-pressure boilers, and especially those that power turbines very pure makeup is essential. Common to much of the industry now is reverse osmosis (RO) pretreatment followed by either mixed-bed (MB) ion exchange or electrodeionization (EDI). This sub-section focuses on sample parameters for an RO/MB configuration. Recommended analyses are:

Condensate Pump Discharge (CPD): Condensate pump discharge (#2 on the diagram) is an absolutely critical monitoring point, especially for HRSGs with water-cooled condensers. A condenser tube leak allows many impurities including chloride, sulfate, and the hardness compounds magnesium and calcium to enter the condensate and be transported to the steam generator and also the steam turbine through attemperator spray systems. Recommended on-line analyses are:

· Conductivity After Cation Exchange (even better is degassed cation conductivity)

Measurement of pH is, of course, important with regard to FAC and general corrosion control. Typically, a portion of the ammonia that is injected into the condensate/feedwater system will carry over with steam and return to the condensate. A recommended normal pH range at this sample location is 9.6-10.0. Measurement and control of pH is even more important at the economizer inlet.

When a sample is passed through a cation exchange column to remove calcium, magnesium, sodium and other cations including ammonium (NH4+), the result is a weakly acidic stream of the remaining anions, primarily chloride and sulfate. Monitoring this conductivity-after-cation- exchange (CACE) can readily detect impurity leakage from the condenser. However, carbon dioxide that enters the condensate will influence conductivity, and thus degassed cation conductivity is now typically recommended for the measurement. The sample is passed through a reboiler, or less commonly a nitrogen sprarging compartment, to remove the bulk of any CO2. A recommended normal CACE limit is 0.2 µS/cm.

Sodium monitoring may supplement cation conductivity for detecting condenser leaks. With a tight condenser, sodium levels in the condensate should be low (<2 ppb), and in many cases they are less than 1 ppb. A spike in either CACE or sodium without a corresponding rise in the other instrument suggests instrument error rather than a condenser leak.

For condensate/feedwater systems containing no copper alloys (typical of HRSGs), oxygen scavengers are no longer recommended as part of the treatment scheme. Rather, the small amount of oxygen that leaks in through the condenser is allowed to remain. This oxygen in combination with high-purity water (CACE <0.2 µS/cm) allows formation of a tight oxide bond on the carbon steel feedwater piping. Current guidelines recommend a CPD dissolved oxygen (D.O.) upper limit of 20 ppb. Higher concentrations suggest excessive air in-leakage somewhere in the condenser.

Economizer Inlet: Unless the ammonia feed for pH control is contaminated, this sample should in large measure be comparable to the CPD. However, analysis is important as this is the water that both feeds the steam generating circuits and is utilized for steam attemperation (see #3 on the diagram).

As with CPD, the pH for the HRSG in this example should be within a range of 9.6-10.0. Specific conductivity is the parameter typically utilized to control ammonia feed, as it is more stable than pH. Cation conductivity and sodium analyses perform the same function as with the CPD sample, to provide an alert to contamination.

The dissolved oxygen concentration should be maintained within a 5-10 ppb range to ensure that the proper oxide layer forms on the feedwater piping and economizers. If the dissolved oxygen that enters at the condenser is too low to establish this range in the feedwater, additional pure oxygen may need to be injected to reach this level. Again, the CACE must be below 0.2 µS/cm for the proper chemistry to be established.

Relatively new to the list, but important, is on-line iron analyses via a corrosion product sampler. In a properly treated system, the economizer iron concentration should be below 2 ppb. Boiler water concentrations should remain below 5 ppb.

LP, IP and HP Evaporator Water: The concentration of impurities allowed in boiler water decreases with an increase in pressure and temperature, in large measure to prevent carryover of contaminants to steam (see #4, 5 and 6 on the diagram). Thus, typical guidelines provide charts that outline control parameters based on pressure. These charts cannot be shown in this article, but the following list outlines recommended sampling parameters:

· Phosphate (for those units on phosphate treatment)

The most important analysis is pH. As has been illustrated, boiler water pH must be maintained within a fairly narrow range to prevent corrosion of boiler tubes. Unit shutdown is required if the pH drops below 8.0. Silica must be held below pressure-dependent limits, as silica will vaporize, carry over with steam, and precipitate in the turbine. This effect becomes dramatic as pressure increases. For example, in a 900 psi boiler the recommended maximum drum water silica concentration is 2.8 ppm. In a 2,400 psi boiler the recommended maximum is 0.21 ppm.

Specific conductivity and CACE allow accurate measurement of the impurity concentration in steam generators. Chloride and sodium provide additional measurement of impurities, and are important for prevention of under-deposit chloride concentration and subsequent hydrogen damage.

Saturated, Main, and Reheat Steam: The steam turbine is the most expensive and refined piece of machinery in the entire system (see #7, 8, 9, and 10 on the diagram). Turbine blade failures are catastrophic and enormously expensive. Thus, protection against contaminant carryover is critical. Recommended analyses include:

CACE provides a general indicator of impurity carryover. As with CPD and feedwater, the recommended normal upper limit is 0.2 µS/cm. However, constituents with the mix that produces CACE values may be harmful at even quite low concentrations. The recommended limit for sodium, which is a good indicator of mechanical carryover, is 2 ppb, but where in actuality the concentration should really be much less than 1 ppb. The recommended limit for silica is 10 ppb, with the realization that it carries over vaporously and also is not a corrosive agent.

One note of interest is that an analytical instrument firm is rolling out an on-line chloride and sulfate analyzer for trace measurements. This tool could prove valuable for future steam chemistry monitoring.

By posting a comment you confirm that you have read and accept our Posting Rules and Terms of Use.
Re: Managing Water and Steam Chemistry with Minimal Staff: Part 2
#1

This is a very good post which I really how to find clipboard history in windows 10 enjoyed reading it is very day that I have the possibility to see like this.