When coal-fired electric power generation was at its zenith in the last century, chemists and researchers learned many lessons about the precise water/steam chemistry control guidelines needed to protect units from corrosion, scaling and fouling that can cause loss of heat transfer and equipment failure. A number of failures have caused injury and death, which is the ultimate cost. Lessons continue to be learned at combined-cycle power plants with heat recovery steam generators (HRSG) and high-pressure industrial cogeneration plants, although often these facilities are minimally staffed without adequately trained water treatment and chemistry personnel.

However, because of the highly stressed conditions in steam generators and turbines, water/steam chemistry needs to be tightly controlled. The phrase “running on the razor’s edge” is very appropriate.

Part 1 of this series provides an overview of the most important concepts in this regard. Part 2 outlines correct monitoring procedures for high-pressure water and steam units. Lastly, part 3 discusses protecting generators during downtimes, another important consideration.

In addition to the fossil power and co-generation industries mentioned above, many of the concepts apply to the concentrated solar power (CSP) industry, where the sun produces the high-pressure steam for turbine-generator operation. 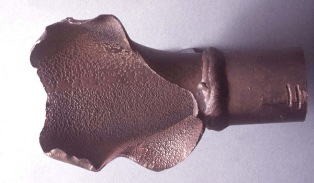 Tube failure due to single-phase FAC. Note the orange peel texture of the failure. Image source: Reference 2. In a topic I touched upon in a previous article, [Ref. 1] many plant designers for new facilities are locked into the mindset of feeding an oxygen scavenger to the condensate and feedwater of the steam generator. However, unless the condensate/feedwater network contains copper alloys (virtually unknown in HRSGs), oxygen scavengers are not recommended in what is an all-ferrous metallurgical environment. Researchers have discovered over the last three decades that oxygen scavengers (a more accurate description is reducing agent), will initiate single-phase flow-accelerated corrosion (FAC) at flow disturbances in the feedwater network. 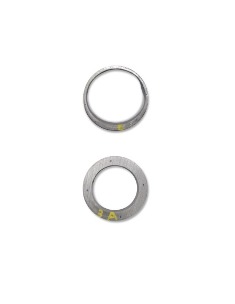 Wall thinning that occurs at flow disturbances due to FAC. Image source: ChemTreatThese areas include economizer and HRSG evaporator elbows, locations downstream of valves and fittings and other spots. As the chart illustrates, single-phase FAC is greatly influenced by temperature and pH. 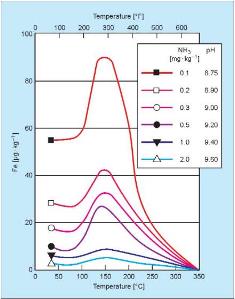 Influence of temperature and pH on iron dissolution from carbon steel. Source: Reference 2.The chart indicates why low pressure economizers and evaporators are most vulnerable. Other locations that may be affected include, in multi-pressure HRSGs, the intermediate- and high-pressure economizers.

FAC-induced failures have killed a number of plant personnel over the last 30 years and severe FAC has been noted in new HRSGs after relatively brief operating times. The treatment program now recommended for drum units without feedwater system copper alloys is known as all-volatile oxidizing [AVT(O)]. In this program, the small amount of oxygen that leaks in with air at the condenser is allowed to remain, and the pH of the feedwater is adjusted with ammonia (or perhaps ammonia and an amine) to a mid- to upper-9 range. Current recommendations call for a dissolved oxygen concentration of 5-10 parts-per-billion (ppb) at the economizer outlet. [Ref. 3]

Of critical importance is to consistently maintain high-purity feedwater (≤0.2 µS/cm cation conductivity) as otherwise the dissolved oxygen could be corrosive. For this reason among others, it is imperative not to operate with condenser tube leaks or contaminated condensate return, [Ref. 4] as the impure water can cause severe corrosion.

In the 1930s as steam generator technology evolved and high-pressure units grew in numbers, tri-sodium phosphate (TSP, Na3PO4) became the common chemical for boiler water treatment as it generates alkalinity (caustic, NaOH) to protect against corrosion. Also, phosphate reacts with hardness compounds to reduce the scaling tendencies of some impurities. The alkalinity-forming reaction is shown below. 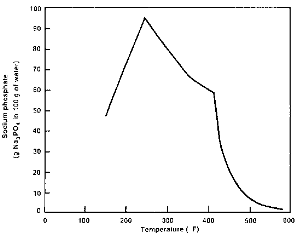 The solubility of TSP as a function of temperature. From Reference 2, original source, EPRI.However, phosphate chemistry in a steam generator can be quite complicated. This is because at higher pressures and temperatures, TSP exhibits inverse solubility and precipitates from solution.

This “hideout” as it is called causes numerous problems with chemistry control. In the middle of the last century, researchers developed several programs that at the time were believed to mitigate these effects. Most involved using blends of TSP and di-sodium phosphate (Na2HPO4), with perhaps a bit of mono-sodium phosphate (NaH2PO4) included. It became evident that these programs were not effective and in fact could generate acidic phosphate deposits that directly corroded boiler waterwall tubes.

Phosphate treatment remains popular, but the program has evolved into TSP feed only, typically with a bulk water phosphate concentration maintained below 2 ppm, and often near 1 ppm to minimize hideout. The most important monitoring parameter with this program is pH, with a typical range being 9.0 to 9.8, but where free caustic alkalinity is maintained at or below 1 ppm. This free caustic requirement illustrates the “razor’s edge” aspect of boiler water treatment, as a free caustic concentration much above 1 ppm can induce caustic concentration and corrosion underneath boiler tube deposits. However, insufficient alkalinity will allow acidic compounds to concentrate underneath deposits.

Note that at these low phosphate concentrations, ammonia measurement is important, as ammonia will artificially influence pH measurements control calculations based thereon, which may lead operators and chemists into believing the chemistry is within proper limits when in fact it is not.

A growing number of drum boiler chemists are choosing to feed straight caustic as the conditioning agent. Here again, the free caustic concentration must be maintained at low levels to prevent under deposit caustic gouging.

Many industry personnel focus on boiler water quality as the most important issue, but steam chemistry is just as critical. In large measure, steam generator chemistry guidelines (which will be explored in part 2 of this series) are designed to protect the steam system and turbine from corrosion and fouling.

For example, the Electric Power Research Institute now recommends a limit of 2 ppb for sodium, chloride and sulfate in the main steam to a power turbine. These impurities will come out of the steam as salt deposits in the early condensate that forms at the last stages of the LP turbine. During unit shutdown, if the deposits become moist via humidity introduced through the condenser or the atmosphere they will cause pitting. This pitting can lead to stress corrosion cracking and corrosion fatigue. Turbine blade failures are both dangerous and expensive. Part 2 discusses these issues in more detail.