When the author began his career in the power industry in 1981, most coal-fired power plants had ample staff with personnel who had been given diverse training. Today by contrast, coal-fired power is largely been replaced by gas-fired combined-cycle power generation and also co-generation.

A key selling factor at many of these facilities is their relatively low operating cost, meaning that many of these plants are minimally staffed. Operators and perhaps a few technical personnel are relied upon to handle numerous tasks, including makeup water system operation and steam generator chemistry monitoring. These responsibilities can be quite complicated at times, and potentially can exceed the training of the personnel assigned to the tasks.

As a result, money saved by minimally staffing a plant may be lost many times over if chemistry upsets cause boiler tube failures or other problems. This article and a subsequent article provide an overview of several critical issues with regard to steam generator water/steam chemistry control and monitoring.

The high temperatures and pressures at which power-producing and large industrial steam generators operate have an enormous influence on corrosion and other chemistry issues. While chemistry treatment and monitoring programs address a number of critical issues, the most important are summarized here.

Control of General and Flow-Accelerated Corrosion: The primary material of construction for combined-cycle condensate/feedwater piping and heat recovery steam generator (HRSG) waterwall tubes is carbon steel. Iron is one of a number of metals that is amphoteric, meaning that it is attacked by both acidic and strongly basic solutions.

In steam generator circuits, general corrosion is minimized by maintaining mildly alkaline conditions, that is, a pH in a mid- to upper 9 range. For condensate/feedwater treatment, ammonia is the typical pH-conditioning chemical to produce the small amount of hydroxide (OH-) alkalinity needed to raise the pH.

As we shall see in the next section, most drum-type HRSGs also receive an additional chemical feed of tri-sodium phosphate or perhaps sodium hydroxide for boiler water chemistry control.

Another form of corrosion that has become well known in condensate/feedwater systems, economizers and low-pressure evaporators of HRSGs is single-phase flow-accelerated corrosion (FAC). FAC occurs at locations of flow disturbances such as elbows, downstream locations in valves, and so on. As the figure illustrates, FAC causes gradual wall thinning until catastrophic failure results. Since 1986, FAC-induced failures have caused a number of fatalities in the power industry. 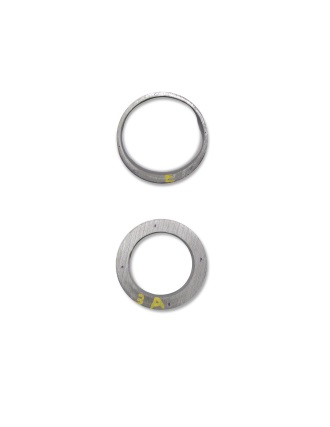 Comparison of a pristine tube section vs. a tube thinned by single-phase FAC. Image source: ChemTreat.Investigation of this corrosion mechanism has led to a change in condensate/feedwater chemistry treatment. For many years, chemists were taught that all oxygen should be removed from feedwater due to its corrosion potential. Thus, systems were equipped with mechanical deaerators, with chemical feed of an oxygen scavenger (more accurately known as a reducing agent) to completely eliminate all traces of dissolved oxygen. Combined with ammonia feed, this program became known as all-volatile treatment reducing [AVT(R)].

We now know that this chemical regimen induces single-phase FAC. Research has shown that in feedwater systems that contain no copper alloys (virtually uniform for HRSGs), oxygen scavengers are not recommended. Instead, the normally small amount of oxygen that leaks in through the condenser in combination with ammonia feed to keep the pH within a range of 9.6 to 10, will minimize or eliminate single-phase FAC.

Changing the mindset of no oxygen scavenger in all-ferrous condensate/feedwater systems has been a difficult nut to crack. Oxygen scavenger feed systems still are regularly listed in the specifications for new combined-cycle plants.

Minimizing and Dealing with Impurity Ingress to the Steam Generator: Makeup water for high-pressure boilers must be highly purified as even part-per-billion (ppb) concentrations of some impurities can cause localized corrosion and other problems. The most common source for impurity ingress is a tube leak or leaks in water-cooled condensers. As the following table outlines, even common fresh water cooling sources contain significant concentrations of dissolved solids. If these are cycled up in a cooling tower, the effect of a condenser tube leak becomes even more pronounced. 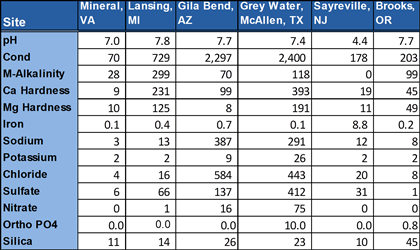 Consider the most notorious impurity from this list, chloride. If the steam generator suffers from small but chronic condenser tube leaks or a large upset, chlorides can concentrate under iron oxide deposits that gradually accumulate on waterwall tubes. At the high temperatures near the tubes, chloride salts will react with water to form acid. 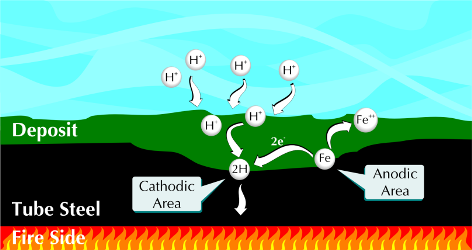 Generation of hydrogen and acid underneath deposits. Source: Reference 2, originally supplied by Ray Post/ChemTreatThe most common reaction of magnesium chloride (MgCl2) with water is outlined below.

The reaction product is hydrochloric acid (HCl). Not only will the acid directly corrode the metal, but hydrogen atoms generated from the reaction will penetrate into the metal and combine with carbon to generate methane (CH4). The very voluminous methane molecules crack the steel and lead to a phenomenon known as hydrogen damage, where tube failure results even though metal loss may be minor. 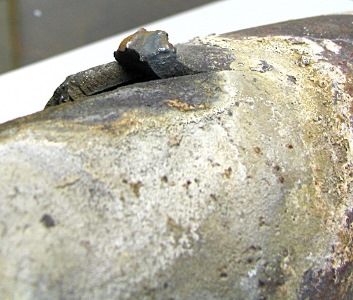 Hydrogen damage failure. Notice the thick wall of the failed section. Image source: ChemTreatHydrogen damage continues to be a leading corrosion mechanism at combined-cycle plants around the world, even though the chemistry is very well understood by researchers. As a result, prompt detection of impurity ingress from a condenser tube leak or other source is critical for protection of steam generators, which we will cover in more detail in part 2 of this article.

We have seen that maintenance of a mildly alkaline environment in the condensate/feedwater is important, and this is also true in HRSG boiler circuits, which are also known as evaporators. The ammonia feed to the condensate will carry over to the evaporators, but even slight impurity ingress can destroy the alkalinity. For this reason, tri-sodium phosphate (Na3PO4, TSP) is still a primary chemical feed to many drum units. It also elevates pH, per the following reaction:

But, it is precisely here where the amphoteric nature of iron potentially rises. Chemistry feed must be controlled, as free caustic (NaOH) can induce under-deposit caustic gouging, which is a high-pH mechanism. A standard guideline recommends a 1ppm free caustic limit in high-pressure boilers. In a seeming paradox, at some plants caustic has replaced TSP as the boiler water treatment chemical of choice. This is due to TSPs inverse solubility above about 300o F, and issues with carryover to steam. However, with plain caustic feed the 1 ppm upper limit should still be observed.

The Importance of Steam Chemistry: For plants with steam turbines, the turbine is the most highly refined piece of machinery in the entire system. Steam chemistry must be monitored, as impurities can enter from several sources, most notably mechanical and vaporous carryover from boiler drums and via contaminated attemperator sprays.

Silica will carry over vaporously and then precipitate in the turbine to form deposits, which can influence turbine performance. Perhaps more seriously, salts (and in particular sodium chloride), sulfate, and hydroxide will precipitate in the last stages of the low-pressure turbine, where early condensate begins to form as the steam moves to the turbine exhaust. During shutdown periods and outages, if these deposits become moist and subjected to atmospheric air after condenser vacuum is broken, they will induce pitting of turbine blades and rotors. Pitting corrosion can then evolve into stress corrosion cracking (SCC) and corrosion fatigue, with eventually turbine blade failure as the result. Such failures, with a turbine spinning at 3,600 rpm, can be catastrophic.

Part 2 of this article will outline some of the most important chemistry parameters for plant personnel to monitor.