The basic unit processes involved in the liquefaction process to prepare natural gas for transport were outlined in Part 1 of this series. These processes include acid gas scrubbing by an amine solution, moisture removal by molecular sieves, heavy hydrocarbon distillation and final cooling. Each of these processes requires numerous heat exchangers, some of which use steam as the heating supply. Of course, as the steam cools it condenses and it is beneficial to recover most or all of this condensate for return to the steam generators. However, the condensate must be treated before such reuse.

Two techniques for basic fluid separation that are extensively used in processes such as this are knockout drums and flash drums. The example shows how these two functions in tandem for part of the process. First, in the knockout (KO) drum residual amine from the acid gas scrubber is recovered. 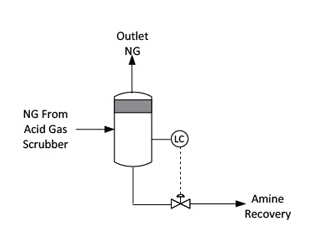 In the knockout drum residual, amine from the acid gas scrubber is recovered. Due to the density difference between liquid and gas, and with the assistance of internal mist eliminators, the liquid separates from the bulk stream and is recycled to the process. The tank level control periodically discharges the collected fluid as appropriate. The recovered amine flows to a flash drum, which allows the release of waste volatile compounds.

In this case, the fluid enters the vessel and the gas is taken off as a side stream. The gas can then be sent to a flare or thermal oxidizer. 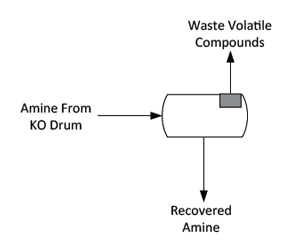 The recovered amine flows to a flash drum, which allows release of waste volatile compounds.becoming an increasingly popular scenario for industrial processes, namely combined-cycle power generation/co-generation. The power plant produces some or all of its electricity from combustion turbines that are combined with heat recovery steam generators (HRSGs). A portion of the steam generated in the HRSGs also supplies heat exchangers in the chemical process. The diagram illustrates this concept. 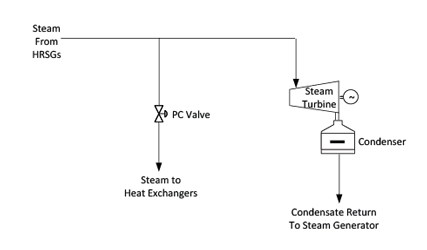 Basic steam flow in a combined-cycle/co-generation arrangement.The major point of the discussion so far is to outline that plants such as this have a rather extensive condensate collection and return system. Among the unit processes in which the heat exchangers function are amine recovery and regeneration for acid gas scrubbing, fuel gas heating and heavy hydrocarbon distillation and recovery. Therefore, the condensate streams from these heat exchangers may contain organic impurities, which should be removed particularly if the condensate is returned to the plant steam generators. Flash drums can be effective in removing light hydrocarbons that are entrained. A key aspect of flash treatment is that most of the hydrocarbons, primarily alkanes, are non-polar compounds that will escape from the condensate if given the chance.

The condensate return system may include a mechanical deaerator, which has been a common device in the power industry for many years.

The fundamental process involves feedwater distribution above a set of trays in the deaerator (DA) section proper. Steam is injected below the trays and passes counter-currently to incoming feedwater. The DA heats the feedwater prior to its return to the boiler, improving the efficiency of steam generation. Also, the scrubbing action of the steam removes non-condensible gases, which is typically the primary function. However, complete removal of oxygen is no longer recommended, as the resulting conditions can lead to single-phase flow-accelerated corrosion (FAC).

The mindset of complete oxygen removal from feedwater continues to persist among many developers and owner’s engineers, even though this chemistry has been discredited unless the condensate/feedwater system contains copper alloys.

Another aspect regarding condensate return is often of significant importance. Even in systems such as those where the impurities may not be 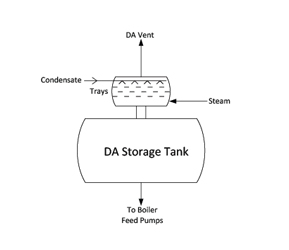 General outline of a common tray-type deaerator.especially corrosive, extensive condensate return systems with large runs of carbon steel piping can, via general corrosion, generate noticeable quantities of iron oxide particulates that transport to the steam generator. These particulates precipitate on boiler waterwall tubes and form porous deposits. Impurities can concentrate under these deposits and cause significant corrosion.

It is often prudent to install a particulate filter on the condensate return upstream of the steam generator. This idea has become the standard thinking for new power plants equipped with air-cooled condensers. These massive units, where air in-leakage can be extensive, may generate a great deal of iron oxide particulates. Also, close attention by operators to condensate return chemistry will help to minimize corrosion. Quite frequently with condensate return systems, air in-leakage allows carbon dioxide to dissolve in the condensate, reducing the pH below neutral. The acidic conditions cause general corrosion of carbon steel that releases iron oxide to the water and also causes piping failures. Well-designed feed of ammonia or amines to the steam generator and condensate return line can help to mitigate this corrosion.

Part 3 of this series will consider the scenario that many plant face in having to treat a number of wastewater streams.