A new high speed microfluidic chip can separate and analyze circulating tumor cells (CTCs) from whole blood in a process that may render biopsies and other diagnostic tests unnecessary in many cases. The technology devised by researchers from the University of Michigan and University of California Los Angeles attracts rare CTCs and sequences their genetics within a single system.

Available systems to capture and genetically sequence CTC cells have had to choose between a high capture or a high sequencing rate. A high number of CTCs can be trapped but at the expense of securing less genetic information. As a result, the genetic profiles often neglect important populations of cancer cells, including 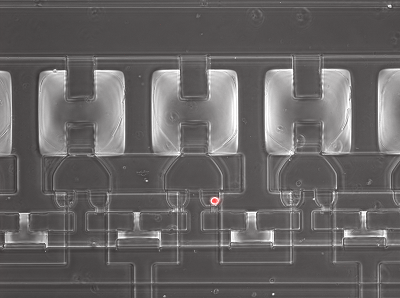 A cancer cell, in red, is captured from a blood sample by Hydro-Seq and the blood cells have been washed away. Source: Yoon Lab, University of Michigancells believed to spread cancer in the body. The advanced chip allows collection of pure CTCs and extraction of genetic information without any contamination from red and white blood cells.

The technology was applied to the analysis of 666 cancer cells from the blood of 21 breast cancer patients, demonstrating that even within a single patient, cancer cells often behave very differently. Previous research had shown that cancer metastasis is mediated by cancer cells that have the properties of stem cells. In the current study, about 30% to 50% of the cancer cells captured from the blood samples displayed stem-like properties.

This population is easy to miss with techniques that capture clean-but-incomplete samples of cancer cells from patient blood by grabbing onto proteins on the cells’ surfaces. Stem-like cells are on a spectrum between two more-typical cell types, which means that they don’t display consistent protein markers.

To obtain a clean and unbiased set of cancer cells from a vial of blood, the researchers used a method that removes blood cells by sorting the blood sample according to cell size. Starting with about one cancer cell in a billion blood cells, this step left only about 95 or so blood cells for every cancer cell. To improve sample purity for genetic analysis, the new Hydro-Seq chip system was applied to eliminate the remaining blood cells.

The Hydro-Seq chip features a system of channels and chambers that traps cancer cells one at a time by drawing fluid through a drain in each chamber, which gets plugged when a cancer cell arrives. Once the chamber is plugged, cells in the channel pass it by and get sucked into the next chamber. Clean fluid is sent backward through the chip and drawn out again to remove the rest of the contaminating cells. The full range of messenger RNA was then profiled with barcoded beads dropped into each chamber. This served to spur the release and attachment of the genetic material to the beads for analysis.