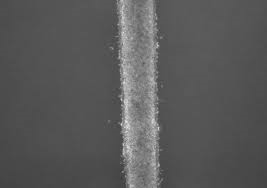 Cells move through a microfluidic chamber. (Source: Michigan Medicine)An understanding of the evolution of breakaway cancer cells responsible for metastasis (spread) of the disease has been elusive. A new microfluidic device engineered at the University of Michigan could help fill knowledge gaps in this field.

The device consists of three tiny molded channels through which cells flow and can be cultivated for at least three weeks in culture. Cell survival in existing microfluidic systems is measured on the order of days, preventing observations of cancer cell change with time.

In the new system, cells appear as a thin milky line in a chamber that’s smaller than a pillbox. They are actually suspended in three dimensions, unlike typical fluidic devices that capture cells in two dimensions. Researchers can feed cancer cells into the device with very minimal disturbance or change to the cells.

Cells are fed into one channel while fluid flows through a parallel channel to provide pressure and flow without disturbing the culture. The flow of fluid through the outer channel mimics what happens with the body’s capillaries. In testing two lines of metastatic prostate cancer cells, researchers successfully isolated leader cells that induce metastasis.

After two weeks, cells from one line were observed to be twice as invasive as the other cell line. That difference disappeared by three weeks, suggesting that the invasive potential of cells may change over time.

By determining differences in the molecular signature between cells that invade and those that don’t, researchers could target the molecular underpinning with therapies to prevent cancer from invading—essentially keeping the cancer confined and preventing metastasis.

The microfluidic device will next be used to analyze triple-negative breast cancer, a particularly aggressive form of the disease. Once the leader cells are identified, the team will begin looking at whether these cells have different genetic or molecular markers than the less-aggressive cells.

By posting a comment you confirm that you have read and accept our Posting Rules and Terms of Use.
Advertisement
RELATED ARTICLES
Catching, analyzing cancer cells with a new microfluidic chip
Portable platform designed to personalize chemotherapy
Video Captures Cancer Metastasis in a Mouse Model
Implant Could Improve Breast Cancer Survival
Microfluidic diagnostic sizes up cancer cells
Advertisement