Researchers at Australia’s Royal Melbourne Institute of Technology University (RMIT) have demonstrated a working rechargeable proton battery. The technology is environmentally friendly and has the potential to store more energy than currently available lithium-ion batteries.

The working prototype combines the best aspects of hydrogen fuel cells and battery-based electrical power. The proton battery is a reversible PEM fuel cell with an integrated solid-state electrode for storing hydrogen in atomic form, rather than as molecular gaseous hydrogen in an external cylinder.

The RMIT team previously showed that a proton battery with a metal alloy electrode for storing hydrogen could work, but its reversibility and rechargeability was too low. The latest version combines a carbon-based electrode for solid-state storage of hydrogen instead of metal hydride as in the earlier work with a reversible fuel cell to provide an integrated rechargeable unit.

Protons produced by water splitting during charging are conducted through the cell membrane and directly bond with storage material with the aid of electrons supplied by the applied voltage, without forming hydrogen gas.

This process reverses in electricity supply mode, as hydrogen atoms are released from the storage and lose an electron to become protons once again. These protons then pass back through the cell membrane where they combine with oxygen and electrons from the external circuit to re-form water. Losses associated with hydrogen gas evolution and splitting back into protons are eliminated.

The researchers demonstrated that a small proton battery with active area 5.5 cm2, a porous activated carbon electrode made from phenolic resin and 10 percentage by weight (wt%) PTFE binder was able to store in electrolysis (charge) mode very nearly 1 wt% hydrogen, and release on discharge 0.8 wt% in fuel cell (electricity supply) mode. A significant design innovation is the use of a small volume. 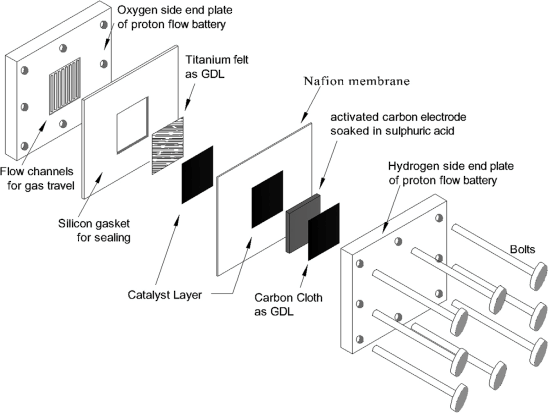 By posting a comment you confirm that you have read and accept our Posting Rules and Terms of Use.
Advertisement
RELATED ARTICLES
Here's how hydrogen is powering homes and industry
PEM Fuel Cell Design Eschews Platinum
Automated fuel cell stack production
The economics of battery-assisted hydrogen production from solar energy
Video: Fuel cell and battery drive heavy duty truck
Advertisement