Here's how hydrogen is powering homes and industry 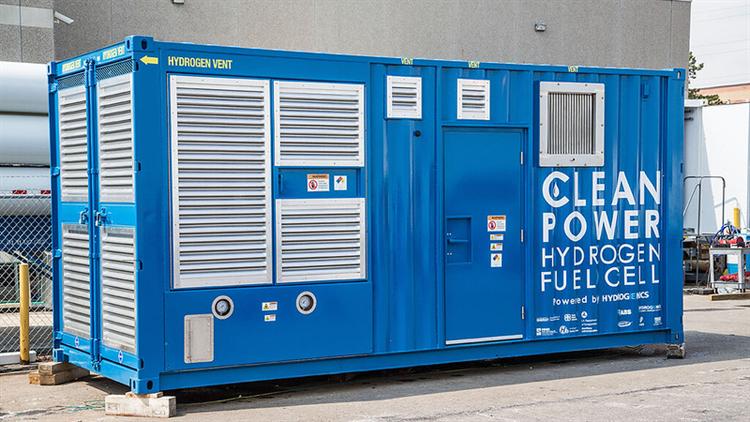 Hydrogen fuel cells recieved a lot of attention for their transportation potential, but their ability to power stationary equipment and facilities is just as promising. Source: Sandia Labs/CC BY-NC-ND 2.0

There is a strong need for green energy that is cost-effective and has a high potential to be scaled up. Hydrogen fuel cells (HFCs) are a clean and efficient alternative to fossil fuels that can be used in a variety of applications.

The most clear and well researched application is automotive powertrains. However, electric vehicles (EVs) have a foot forward in the race to displace internal combustion engines, although research for some automakers and startups continue, as there are several advantages to fuel cells.

Nonetheless, HFCs and storage continue to be powerful alternatives to provide basic utilities to residences, industries and manufacturing. This technology has the potential to provide sustainable energy and can help solve the energy crisis, reduce greenhouse gas emissions and air pollution, and address the depletion of fossil fuels. 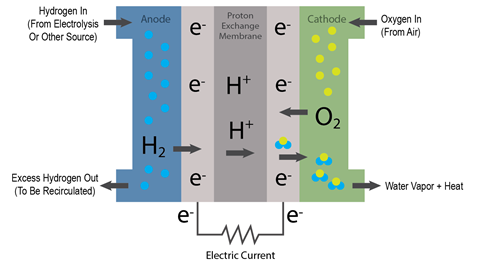 HFC schematic.A fuel cell uses electrochemical power to generate electricity. In an HFC, hydrogen is combined with oxygen from the air to produce electricity with water and heat as the only byproducts. This process can be used to produce a clean, sustainable and environmentally friendly energy source.

A single fuel cell is made up of three components: a proton exchange membrane, an anode (negative electrode), and a cathode (positive electrode). The catalyst at the anode separates the protons and electrons from the hydrogen atoms. The electrons are then fed through an external circuit and create a flow of electricity. In the meantime, the protons move through the cathode where they combine with oxygen from the air to produce water vapor and heat.

The electrical needs to power an electrolysis process to split hydrogen and oxygen are relatively slim and can be fulfilled by photovoltaics or wind.

The most clear use case for HFCs in industry is as backup power sources for important and remote facilities or infrastructure. Battery reserve power might seem like the more natural fit for a few reasons. First, power generation efficiency of a HFC is typically around 40% to 60%, whereas for batteries the storage efficiency is around 85%. In addition, there is often a lag between mains power interruption and when the HFC is producing enough power to support a facility, which must often be bridged with battery power. Also, batteries are generally a more prevalent and better understood technology. 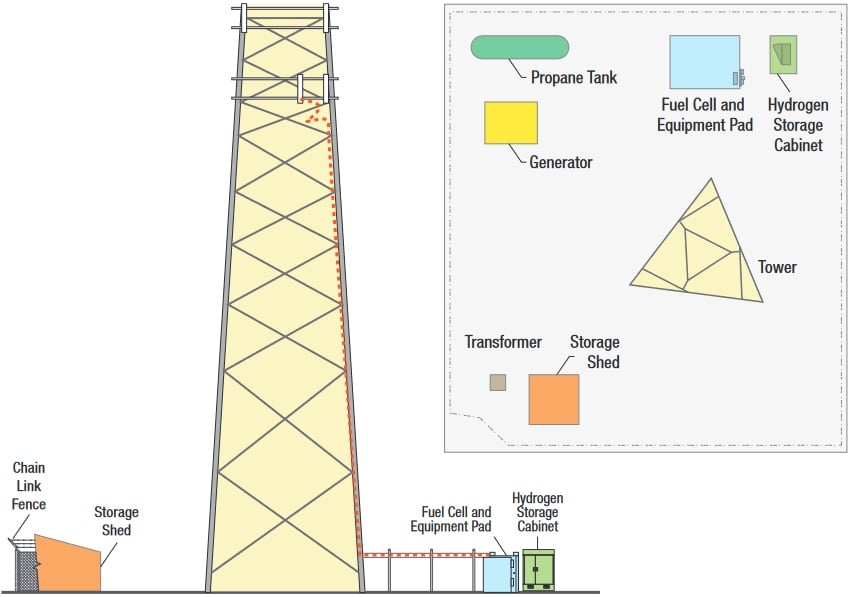 Diagram of how a HFC can power a cell tower. Source: NREL

Yet for power hungry applications or longer mains power blackouts, HFCs are an important solution. First and foremost, energy storage and scale is much more adaptable with a HFC backup, as increasing the total generation capacity mainly rests on the ability to supply a hydrogen source. This can be an industrial gas delivery to on-site, easily scaled storage tanks, or can take the shape of on-site hydrogen generation by electrolysis. The space requirements and initial capital expense for HFC backup power are greatly reduced compared to battery backup power as well. The U.S. Department of Energy has found that the anticipated duration of backup power needs is a key consideration, with applications that may require 12 hours or more of backup power to favor HFCs versus battery.

HFCs are being used today as backup power sources for things like data centers and telecommunication outposts, which have previously relied on fossil fuel generators.

HFCs are also finding uses in common industrial and manufacturing processes. HFCs are an ideal fit for something like coal mining operations, which release a large amount of methane as a waste gas. If coupled with a gas recapture and electrolysis system, it offers the ironic ability to create green energy on-site for mining applications. HFCs are also being leveraged for cogeneration; that is, making use of the thermal energy created by an HFC, which for something like a cell phone tower would go to waste. When implemented in this fashion, HFC efficiency approaches 85%, comparable to batteries. This can obviously support general HVAC needs of a factory or facility, but can also be leveraged to create process steam, pressurization and mechanical energy. This can can also drive absorption chillers to support industrial refrigeration needs.

Finally, don't overlook the ability of HFCs to create energy for high-power robots and material handling vehicles in warehouses and manufacturing. Since there are no emissions but high power delivery, they are increasing being found in automated guided vehicles, robots and cobots, and forklifts.

Stationary fuel cells may become a reality for heating in residential applications though they come with a price tag. It’s estimated that installing a hydrogen fuel cell at home can cost from $35,000 to $100,000 and greater. 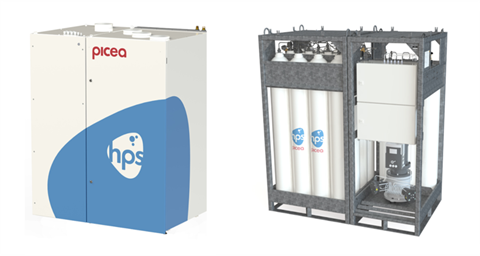 Picea, a home HFC system, created by Home Power SolutionsA HFC that uses electricity produced from solar energy to create hydrogen from the surrounding air has recently come into consumer markets. German company Home Power Solutions makes HFCs for residential use and is expected to handle a power demand from 3,000 kWh to 6,000 kWh. The hydrogen tank requires 4 m2 to 7 m2 of space but can be placed underground or in a garage. In this system, energy collected from solar panels is used to make hydrogen fuel that can be stored for off-peak use. Tax incentives may be in effect for people opting to use green energy in their homes depending on their country of residence. In the U.S., individuals can claim 22% to 26% of installation costs for making their home more energy efficient depending on the installation date.

HFCs may also play a role in district heating. In this scenario, local electrical power is supplied by a large HFC -- indeed, some manufacturers currently offer HFCs large enough to power 250 homes, plus schools, hospitals and small businesses. In addition to being electrically connected, homes in the network also receive the thermal energy from the same source. Water is heated at the HFC and transmitted to homes via a network of pipes, where it can be used for cooking, bathing or HVAC. Previous studies have indicated that this district heating technique offers the much better energy efficiency when compared to decentralized heating for each and every home or business.

Challenges for industrial and residential HFCs

HFCs have been around for a while, so why haven’t they overtaken the energy market yet? On the surface, hydrogen seems like the ideal fuel. On a per weight basis hydrogen can produce 2.5 times more energy than kerosene, and it has a lower density than fossil fuels making it light to transport. By only producing water vapor as a by-product, it really seems like a green energy solution.

While hydrogen is often considered to be the cleanest fuel, there are other problems that need to be overcome before it becomes the primary fuel for vehicles and other technologies. Hydrogen is more expensive to produce than gasoline, it takes time to be produced and it's a highly flammable gas. Currently, there is a lack of hydrogen infrastructure around the world making difficulties related to the hydrogen fuel supply chain more evident.

While hydrogen fuel can be produced in a variety of ways, the most common is to use electricity. The first step in creating pure hydrogen is to break it apart from the oxygen in water via electrolysis. As a result, a lot of energy is needed to produce hydrogen fuel, so if those energy sources are not renewable, then hydrogen fuel is not a clean energy source. If a lifecycle carbon assessment is performed on HFCs, they sometimes performs worse than fossil fuels.

Hydrogen fuel as a road map for renewable energy

Hydrogen is a critical component for our future sustainability efforts. This energy vector is a plentiful element and is widely available throughout the world. By adding hydrogen to our infrastructure, we can make renewable energy more viable while also reducing the impact on our environment.

There are some barriers to hydrogen as a truly green energy source. However, when hydrogen is produced sustainably and infrastructure is developed, HFCs could be the ultimate green solution to the energy crisis.

Jody is a freelance writer in the technology and engineering niche. She studied in Canada and earned a Bachelor of Engineering. Jody has over five years of progressive supply chain work experience and is a business analyst. As an avid reader, she loves to research upcoming technologies and is an expert on a variety of topics.

By posting a comment you confirm that you have read and accept our Posting Rules and Terms of Use.
Advertisement
RELATED ARTICLES
HFC phaseout to begin in the US
Celebrate National Hydrogen and Fuel Cell Day
What is the ideal refrigerant?
Hydrogen-ready engines to power waste-to-hydrogen plant
Researchers pursue a nuclear source of hydrogen fuel
Advertisement