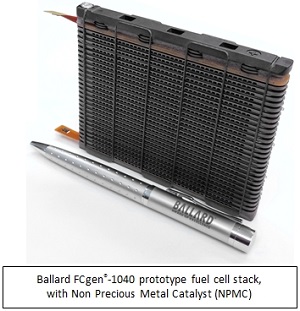 Ballard has incorporated the new catalyst into a high-performing catalyst layer under a Technology Solutions program and plans to launch a new 30-watt FCgen-1040 fuel cell stack product incorporating NPMC for commercial use in late-2017.

The NPMC-based FCgen-1040 fuel cell stack will be a variant of Ballard’s FCgen-micro fuel cell stack, derived from the company’s air-cooled fuel cell technology designed for integration into ultra-lightweight applications.

In a PEM fuel cell, the membrane electrode assembly (MEA) is formed by placing a catalyst-coated membrane between two gas diffusion layers where, until now, the catalyst has been precious platinum metal. When hydrogen gas flows across one side of the MEA and oxygen flows across the other side, an electrochemical reaction occurs, splitting hydrogen into protons and electrons with the electrons captured as electricity. Combining fuel cells together to form multi-layer stacks increases the amount of electricity that can be produced.