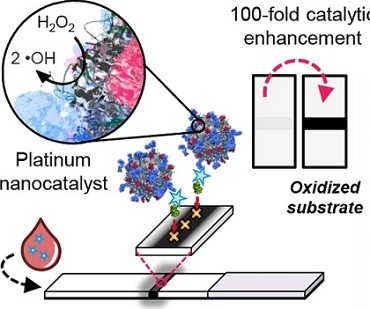 Source: American Chemical Societydetect low levels of biomarkers in blood. Researchers in the U.K. have developed a new tool for diagnostic deployment in these areas. The system is designed for the early detection of HIV.

The test is based on a current diagnostic method known as a lateral flow immunoassay, similar to the technique employed by pregnancy tests. If a patient is HIV positive, virus components present in the blood will bind to colored particles on the paper test, indicating HIV infection. While simple and affordable, the test is also sensitive enough to detect HIV when the virus level in blood is very low, allowing for earlier diagnosis.

The assay senses a protein called p24, found on the outside of the HIV virus, which serves as a biomarker of the disease. An amplification stage using porous platinum core–shell nanocatalysts is included in the standard immunoassay, increasing the signal produced by p24 up to 100-fold and enabling detection of the virus with sensitivity surpassing that of the current industry standard tests.

Results can be read by a mobile phone camera through an app, making it easier for community health workers to diagnose and treat HIV in developing countries.

Researchers from University College London and Imperial College London say the test could be repurposed and applied to a broad range of infectious diseases, potentially allowing for the early detection of diseases such as Ebola and Zika.

The research is published in the journal ACS Nano.