A rapid, inexpensive assay for infectious diseases requires only a digital camera, a drop of blood and a special glowing paper strip. The procedure returns results in 20 minutes and could be useful for tropical disease testing in developing areas. 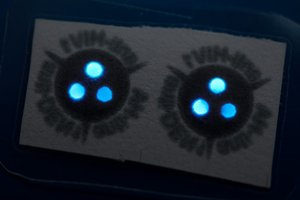 This paper strip hosts two copies of the test. The three glowing dots per test enable assessment of three different antibodies. Photo: Bart van Overbeeke, TU/eTechnology (TU/e) in the Netherlands and Keio University in Japan. The paper emits a blue-green light if certain antibodies are present in the applied blood sample. A more intense blue indicates a higher concentration of antibodies; a mobile phone’s camera is sufficient to determine the exact color.

After a droplet of blood hits the paper, a luminous sensor protein developed at TU/e triggers a reaction in which blue light is produced. In a second step, the blue is converted into green light – unless an antibody binds to the sensor protein. Less green signals more, while an intense green indicates fewer antibodies.

The ratio of blue and green light can be used to derive the concentration of antibodies, as was successfully demonstrated by testing antibodies for HIV, influenza and dengue fever simultaneously.

The paper-based test, described in Angewandte Chemie, could be commercially available in a few years. 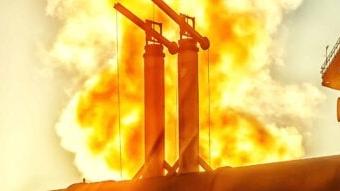