ICCT Study Finds GHG Emissions from Shipping on the Rise 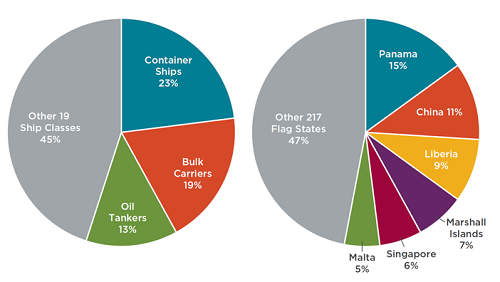 Greenhouse gas (GHG) emissions from global shipping are increasing, according to a study released by the International Council on Clean Transportation (ICCT).

The assessment combined state-of-the-art global ship operations (AIS) data with detailed vessel characteristics for more than half a million ships to estimate GHG emissions and air pollution from shipping at high resolution (1-by-1 degree) on an hourly basis from 2013 to 2015. Maritime fuel consumption increased from 291 to 298 million tons (+2.4 percent) from 2013 to 2015, compared to a 7 percent increase in shipping transport work. Over the same period, carbon dioxide (CO2) emissions from global shipping (oceangoing vessels, domestic ships and fishing vessels) increased from 910 to 932 million tons.

Only refrigerated bulk carriers managed to reduce their CO2 emissions by a greater percentage than they reduced their CO2 intensity, owing to a 5 percent drop in overall supply for these ships from 2013 to 2015.

Transport supply outpaced ship efficiency improvements, driving the emissions increase. Speed and size are contributing factors: average speeds remained largely flat between 2013 and 2015 for most ships, the largest oil tankers and container ships sped up nearly 4 percent and more than 11 percent, respectively. Black carbon is cited as the second most important climate pollutant after CO2, representing between 7 and 21 percent of the total climate impact of shipping.

If it were a country, the global marine transportation sector would have ranked 6th in terms of CO2 emissions in 2015, just below Germany and well above Korea. Marine CO2 emissions are projected to double by 2050 as international trade expands unless effective policies are developed to constrain emissions growth.

Countries, industry representatives and non-governmental organizations will gather the week of October 23rd in London to develop the International Maritime Organization’s comprehensive GHG strategy for ships, which could include a cap on ship GHG emissions.

Re: ICCT Study Finds GHG Emissions from Shipping on the Rise
#1

This is good news. That means the global economy is getting healthier.

Re: ICCT Study Finds GHG Emissions from Shipping on the Rise
#2
In reply to #1
phoenix911

I agree, of course emissions will be on the rise.

As opposed to accepting a poor economy, and plastering lipstick on a pig and saying.... that a poor economy is liberating and that facilitates the type of “liberation” that the “Founders had in mind” because it allows you to quit your job and become a “photographer,” a “writer,” a “musician”--or “whatever.”

it's liberalizing.... now it give you a chance to