Application of high-tech coatings to hulls can reduce the effect of drag and in turn lower energy use, operating costs and emissions. A bio-inspired coating developed by German researchers is expected to offer a fuel-saving potential of at least 5% in the medium term, but more likely 20% when the material is ready to be commercialized.

The hydrophobic layers are based on models from nature, such as the floating fern Salvinia molesta, which 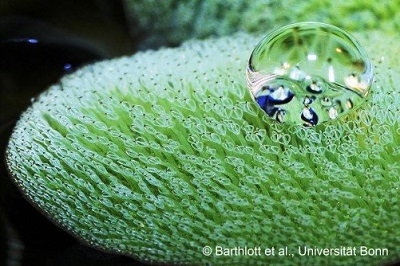 The aquatic fern Salvinia molesta traps air under water. Source: Prof. Wilhelm Barthlott/University of Bonnfeatures water-repellent hairs at the base of leaves and hydrophilic hairs at the tips. The plant uses these structures to surround itself with an air layer on the surface of its leaves.

This principle was applied to the design of a system in which the air layer is retained by hydrophobic grid-like structures mounted at a defined distance on the ship hull surface. The technique can be used in conjunction with the established micro-bubbles technique, which can refill the air layer if needed. Since the air is retained by the grid surface, only a reduced air supply is necessary and the energy needed for the bubble-producing pumps is reduced.

Shipping operations are a major source of fuel consumption and air pollution, consuming an estimated 250 million tons of fuel per year and emitting about 1 billion tons of carbon dioxide. The high degree of drag between hull and water can be responsible for up to 90% of energy consumption.

The prospective fuel conservation and emissions reduction benefits of the air-retaining coating were calculated for bulk carriers, oil tankers, container ships, a cruise ship and an ultra-large container vessel for a fictional journey. A drag reduction of 20% by the Salvinia-inspired coatings could lead to savings of 32.5 million tons of fuel, equal to $18.5 billion and 130.0 million tons of carbon dioxide equivalent annually.

The study conducted by researchers from University of Bonn, University of Rostock and Bonn-Rhein-Sieg University of Applied Sciences is published in Philosophical Transactions of the Royal Society A: Mathematical, Physical and Engineering Sciences.

And bio-fouling will create difficult challenges to using this technology outside of the laboratory. The ocean is a harsh mistress as many dreams and good ideas have gone upon the shoals.

Have these treatments been tested in any kind of turbulence? It's unlikely that the air pressure needed for biomimetic hydrophobicity will exist in marine environments, particularly at speed. I would like to see some actual data related to field tests.

5 to 20 % savings on fuel is great resource saving.

Bio - Technology is only hope towards sustainable Green revolution.