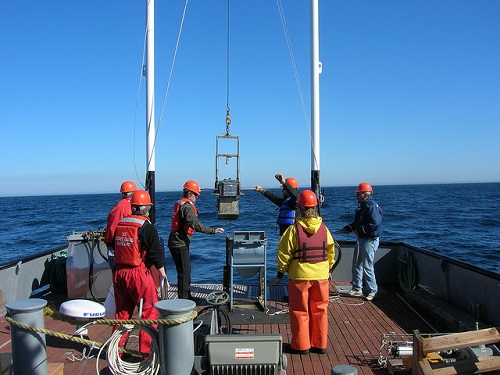 A 500-pound device with jaws was used to find relationships between sediment and sea life. Image credit: Oregon State University

As more interest grows in developing offshore wind and wave energy facilities, concerns over environmental implications before constructing facilities in the ocean is rising.

A research team from Oregon State University is looking to address the problem by using a 500-pound device with jaws to grab squares of sediment from the ocean floor at eight sites off the coasts of northern California, Oregon and southern Washington.

Researchers found relationships between sediment characteristics and animal life (clams and worms) were consistent across the sites they sampled. This consistency may allow renewable energy companies to reduce collections of marine animal life at potential development sites.

Instead, companies could conduct primarily sediment analysis, which is mostly automated, and then cross-reference its findings with Oregon State’s team to predict the marine animals likely found at the site and determine the impacts.

Oregon State researchers collected sediment from 137 spots ranging in depths of about 160 to 360 feet—the current target for wave energy development. The eight locations included one off the coast of Eureka, California, six Oregon locations and Grays Bank, Washington.

While offshore renewable energy development is still in its infancy in the U.S., with the first offshore wind project recently completed off of Rhode Island, European countries have a long history of development.

Sarah Henkel, a marine biologist at Oregon State's Hatfield Marine Science Center, says the team is currently conducting similar collections and analyses at the depths targeted for offshore wind development in anticipation for future wind projects off the Oregon coast.

The full research can be found in the journal Continental Shelf Research.

By posting a comment you confirm that you have read and accept our Posting Rules and Terms of Use.
Advertisement
RELATED ARTICLES
Despite Rich Resources, California Offshore Wind Faces Uphill Climb
Wave energy potential of the US West Coast
Computational modeling is key to protecting a key US energy industry hub
U.S. Offshore Wind Moves Forward at a Crawl
This Giant Crane is Building an Offshore Wind Farm
Advertisement