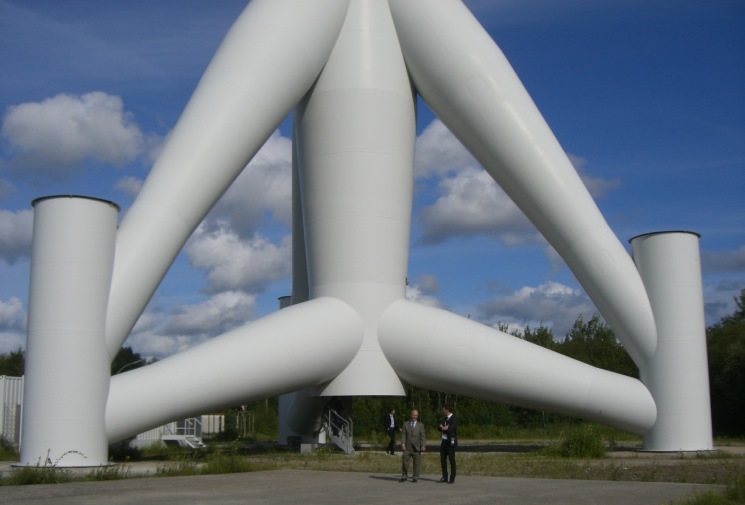 Crews in late July began on-site work on Block Island Wind Farm, the first offshore wind farm in the United States. Despite the milestone, a close look at the U.S. offshore wind industry reveals continued headwinds for its widespread adoption.

The five turbines will be secured to the ocean floor using steel-piled jacket foundations. DW chose this design over the monopile foundations common in recent European offshore wind farms, citing that monopiles could only be cost-effective in water depths of less than 60 ft. Depths around the Block Island site average 80 ft. In addition to the turbines, DW will also bury a 21-mile-long submarine cable under the ocean floor. The cable will connect the offshore array to the existing electric grid at Narragansett, on the Rhode Island mainland.

The project’s permitting process has been controversial. In August 2010 the Rhode Island Public Utilities Commission (RIPUC) approved a contract calling for DW to sell electricity to National Grid at $0.244 per kilowatt-hour (kWh) for the first full year of operation. That was more than $0.10 higher than the state’s average kilowatt-hour rate. After numerous appeals, the Rhode Island Supreme Court upheld the regulatory commission’s decision. The U.S. Federal Energy Regulatory Commission (FERC) has fielded but not acted upon several related complaints. The latest was filed with FERC in May 2015 and alleged that the state regulators violated federal law in approving the contract. 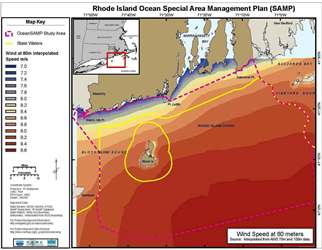 (Click to enlarge.) Average annual wind speeds at a height of 80 meters above sea level. Block Island is circled in yellow. Image source: energy.ri.gov/renewable/offshoreThis contentious regulatory process has become the rule rather than the exception for U.S. offshore wind projects, according to Maxwell Cohen, a senior research analyst with IHS Energy Renewable Power. Slow adoption of offshore wind in the U.S. is driven by “a combination of very high costs and a very long and unpredictable development process,” Cohen says. He cites the much-larger 130-turbine Cape Wind project in federal waters of the Atlantic off Massachusetts as a prime case of development difficulties.

Since initial approvals were received a decade ago, the $2.6 billion project has faced controversy over turbine location, power purchase agreements (PPA) between utilities and project owner Energy Management Inc. (EMI), and the intervention of former Massachusetts Governor Deval Patrick, in 2012. Faced with continued legal challenges, EMI missed the Dec. 31, 2014 deadline to obtain financing and begin construction. This caused National Grid and Northeast Utilities to terminate their PPAs, leaving the project’s future uncertain.

Offshore in the U.S. Renewables Mix?

Offshore wind ranks as one of the most expensive power generation methods. The U.S. Energy Information Agency (EIA) estimates that the levelized cost of energy (LCOE)—a measure incorporating levelized capital cost, fixed and variable operations and maintenance (O&M) costs and transmission investment— for offshore wind systems entering service in 2020 at around $197 per MW-hour. That is around two-and-a-half times the levelized cost for onshore wind or conventional natural gas. Comparing offshore wind’s LCOE with all other generation types, only solar thermal is projected by EIA to be costlier.

Recurring costs for offshore wind are also relatively high: 2012 O&M expenses were around $74 kW-per year according to EIA. That is almost double the cost for onshore wind O&M due to the difficulty in staging ships and sometimes helicopters to perform maintenance on offshore installations.

As a relative newcomer to the U.S. energy landscape, offshore wind may benefit from a number of successfully completed commercial projects—the first of which may be Block Island.

“Offshore wind farms require special equipment and skilled labor that onshore projects don’t need, both for installation and O&M,” says Cohen. “Currently there’s no real supply chain for offshore wind in the U.S.” However, if enough small projects get under way, that could help develop the supply chain and reduce costs. 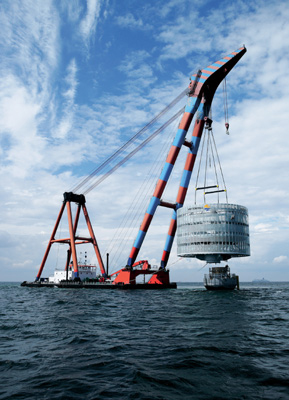 Energy substation with 120 MVA transformer being installed in waters off of Sweden in 2008. Image source: NREL, credit Siemens AG.According to the International Energy Agency, wind turbines operate at wind speeds of between 2.5 and 25 meters per second; at speeds below this range turbines fail to turn. At speeds greater than 25 m/s, a turbine shutdown is necessary to avoid damage. Offshore wind power might be a less variable resource, because offshore wind typically blows more frequently, more uniformly, and often stronger than onshore. According to the U.S. Department of Energy, winds around the Block Island site average between 9 and 9.5 m/s, within the range considered ideal for wind turbines.

Cohen cites environmental differences between the U.S. and UK to explain why Great Britain generates so much more wind energy.

The relatively shallow waters surrounding the U.K. hold potential for wind resources. Cambridge professor and U.K. Department of Energy and Climate Change advisor David MacKay estimates that 40,000 square kilometers of British territorial waters are shallow enough for fixed-bottom offshore turbines. Based on that, the maximum theoretical development for shallow offshore wind power could yield nearly enough to satisfy low-peak demand on a typical winter day for every UK resident.

The United Kingdom has also benefited from centralized policy support. The Renewables Obligation (RO), introduced in 2002, requires energy providers to source a percentage of their energy from renewable sources. The current RO obligation for the period ending March 31, 2016 is 29.9%. Suppliers must earn renewable obligation certificates (ROCs) to cover their obligation and are required to buy out energy supply not covered by their ROCs.

In February 2015, the U.K. introduced contracts for difference (CFD) designed to stabilize renewable energy costs and offset investment costs. Owing in part to these measures as well as increased development, the LCOE for offshore wind in the UK fell from £136/MWh (around $210) in 2010 to £121/MWh ($187) in 2014. Levelized costs of £100/MWh ($155)—still double the wholesale cost of electricity— may be possible by 2020, according to a report by Catapult Offshore Renewable Energy.

U.S. wind power development has been primarily spurred by the $0.023 per kWh Production Tax Credit (PTC) and the Investment Tax Credit (ITC), both of which expired at the end of 2014. Some incomplete projects, including the Block Island Wind Farm, qualified for the PTC or ITC before its expiration. Most U.S. states have a renewable portfolio standard (RPS) similar to the U.K.’s RO, with renewable energy credits (REC) performing a similar role to ROCs. 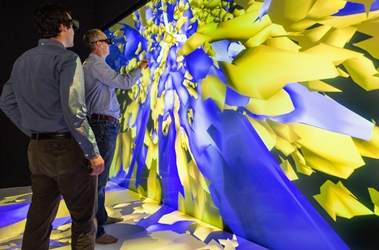 Two researchers from the U.S. National Renewable Energy Laboratory examine velocity (blue) and turbulence (yellow) in a visual simulation of a Danish wind farm. Image source: NREL, Dennis Schroeder.“New Jersey and Maryland both passed laws specifically requiring offshore wind be part of how utilities satisfy their RPS requirements—known as a ‘carve out’—which would be tracked with special offshore RECs (ORECs)” Cohen says. However, these statutes give regulators discretion over procurement, and no projects have moved forward. The Fishermen’s Energy Atlantic Wind Farm off New Jersey, for example, has been rejected several times by the state Board of Public Utilities despite a 2014 Department of Energy grant to move the project forward.

The Future of U.S. Offshore Wind

Inconsistent subsidies, high costs and grassroots opposition have prevented the U.S. offshore wind industry from gaining traction. Citizen groups have formed in many states and oppose the technology on the grounds of higher electricity bills, potential environmental damage due to turbine fires and general disruption to marine environments and shipping routes.

The IHS Energy report “Global Wind Power Market Forecast” predicts a lull in project completion after the scheduled completion of the Block Island Wind Farm and a 12 MW project 27 miles off the coast of Virginia Beach, Va., which is due to be completed in 2017. The report estimates that, based on the current project pipeline, no new U.S. offshore wind projects will be completed and operational until at least 2023. Those anticipated projects would include hundreds of megawatts worth of total generating capacity, according to the report.

The Department of Energy’s 2015 Wind Vision report, a follow-up to a 2008 report, proposes lofty targets for wind energy’s role in the renewables mix. The study proposes measures to reduce offshore wind LCOE by 22% by 2020, 43% by 2030 and 51% by 2050, and to achieve a wind energy generation share of 10% by 2020. Specific measures key to capital and operating cost reduction include technological advances, continued site permitting and construction, policy analysis, workforce development and supply chain improvements.