A Comeback for Coal May Be Hard to Engineer

A combination of factors including low-cost natural gas, increasingly competitive renewable energy resources, and changes in global markets have combined to threaten coal's long reign as "king" among fuels.

At a recent energy conference, a Credit Suisse analyst labeled coal as the first of the major fossil fuels to be in "terminal decline." That may be an overstatement for a natural resource with an estimated 200-year supply in the United States alone.

But a vivid example of coal's declining role for power generation came on April 21 when, for the first time since the 1880s, Great Britain went 24 hours without a single electron of electricity being generated by a coal-fired resource. Gas, nuclear, renewables, and imported energy filled the dispatch order instead. 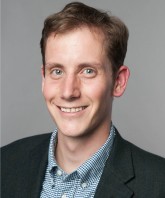 Now a new report from Columbia University's Center on Global Energy Policy seeks to answer the question "Can Coal Make a Comeback?" The question is timely as President Donald Trump signed an Executive Order in 2017 that ordered federal agencies to rescind or review a number of Obama-era regulations. In doing so, he told coal miners that they would be "going back to work."

And other sources say that since the November presidential election, nearly 7,000 megawatts of coal-fired generating assets have been added to the list of asset retirements.

The authors say that U.S. electricity demand fell in the wake of the Great Recession, and has yet to recover largely due to energy efficiency improvements in buildings, lighting, and appliances. What's more, a surge in U.S. natural gas production from shale-based plays has driven down prices and made coal increasingly uncompetitive in U.S. electricity markets.

"The majority of the impact is cheap natural gas," says Peter Marsters, research analyst with the Rhodium Group, and one of the report's authors. "We don't see that changing radically any time soon." 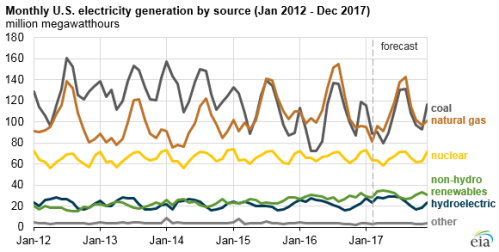 EIA expects natural gas to be largest source of U.S. electricity generation this summer.The Energy Department's Energy Information Administration says in its April 2017 Short-Term Energy Outlook that electricity generation fueled by natural gas during June, July, and August will be lower than last summer, but it will continue to exceed that of any other fuel, including coal-fired generation, for the third summer in a row.

The projected share of total U.S. generation for natural gas is expected to average 34%, which is down from 37% last summer but still exceeds coal’s generation share of 32%.

Coal also has faced growing competition from renewable energy, with solar costs falling 85% between 2008 and 2016 and wind costs falling 36%. Coal is not alone as a number of nuclear power plants have shut down in recent years due to competitive pressures from renewables. Their shutdown comes even as a number of states pass laws and adopt rules that recognize the value of zero emission resources such as nuclear.

Other industry watchers say that the trend among power generators is to favor power plants that can ramp up and down to even out the variable supply of electricity provided by intermittent renewable generating resources. Natural gas power plants are better able to cycle than so-called baseload coal or nuclear plants. 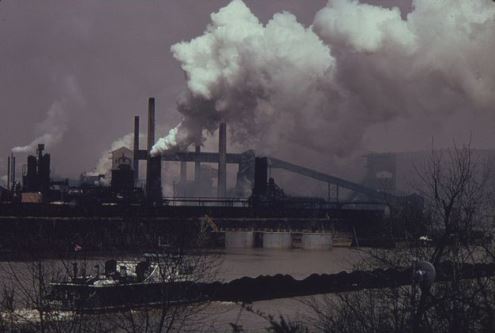 In this 1973 image, a coal barge on the Monongahela River in Pennsylvania passes a US Steel coke plant. Credit: WikipediaAnother factor not specifically cited in the Columbia study is the difficulty that sometimes arises in permitting and siting new generating assets. Developers of natural gas-fired power plants have faced less opposition than have developers proposing coal or nuclear. From a financial perspective, construction times for gas-fired assets may be two to three years. Coal plants may take twice as long to build. And nuclear power plant construction can extend to the better part of a decade, taxing even the best long-term planning scenarios.

In the PJM Interconnection, for example, gas-fired generation has climbed from 4% of the total mix to around 30% today, according to Andrew Ott, president and CEO, who spoke at a recent conference. At the same conference, John Bear, president and CEO of MISO, said that coal's share of the generation mix in his 15-state interconnect fell from 80% a decade ago to around 50% today. Gas, meanwhile, increased its share from less than 10% to around 30%. And wind grew from a negligible contribution 10 years ago to 8-9% today.

"Gas is economical and flexible and can follow intermittent resources," Bear said.

And the administration's recent move to reconsider rules related to methane emissions by oil and gas producers could hurt coal to the extent that avoided environmental compliance costs favor natural gas producers.

More broadly, the authors say that changes in the global coal market have played a role in the collapse of the U.S. coal industry, perhaps greater than is generally understood. A slowdown in Chinese coal demand, especially for metallurgical coal, depressed coal prices around the world and reduced the market for U.S. exports. More than half of the decline in U.S. coal company revenue between 2011 and 2015 was due to international factors.

Marsters says that China's economy is moving from one that relies on heavy industries and energy intensiveness to a more service-focused economy similar to the U.S. As a result, "coal demand won't look like it has for the past 10 years," he says. A main impact is on metallurgical coal producers in the Appalachian region, many of whom looked to China for growth. "Producers were looking outside the U.S. for growth," he says.

While global coal markets have recovered somewhat in recent months due to supply restrictions in China and flooding in Australia, the authors say they expect any rally to be short-lived.

Slower economic growth and structural adjustment in China will continue to put downward pressure on global coal prices and limit market opportunities for U.S. exports. Indian coal demand will likely grow in the years ahead, but not enough to make up for the slowdown in China. The same is true for other emerging economies, many of which are negatively impacted by decelerating Chinese commodities demand themselves.

By posting a comment you confirm that you have read and accept our Posting Rules and Terms of Use.
Advertisement
RELATED ARTICLES
Blame Economics, Not Regulations, for Coal's Decline, Study Says
Fossil Fuel Use for Power Fell in 2017, EIA Says
Which basin produces the most coal? The answer may surprise you
This technique is keeping coal in the power generation mix
South Opts for Natural Gas as Coal Declines
Advertisement