Rare Earths and Steel May Offer Hope for Coal

The use and production of coal is on the decline, pressured by cheap natural gas and policies to promote cleaner sources of energy.

In a recent article in The Regional Economist, Regional Economist Charles Gascon and Senior Research Associate Jonas Crews of the St. Louis Federal Reserve Bank took a deeper look at the future of coal production as a source for both electricity and jobs in the U.S. 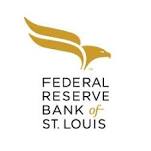 After a modest and consistent rise over a few decades, U.S. coal production started to decline in 2009. By the end of 2016, annual production had fallen 38 percent from its 2008 peak in response to plummeting coal prices, driven largely by rising international supply and declining domestic demand, the authors said.

They said that countries such as Australia, China, and India have steadily increased their mining of coal in the past decade, and the U.S. share of world coal production fell from 18 percent in 2004 to 11 percent by 2014.

At the same time, demand for U.S. coal has also faded, as a result of reduced electricity demand and increased competition from natural gas and other energy sources. 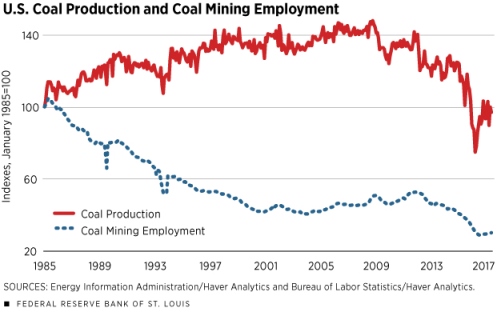 Recent trends in coal production and employment. Credit: St. Louis FedSupplies of natural gas, coal’s largest competitor, skyrocketed thanks to the use of hydraulic fracturing in the U.S. The authors said that the average price of natural gas declined from $7 per million British thermal units in 2007 to $3 in the first five months of 2017.

“In 2016, for the first time in U.S. history, natural gas surpassed coal as the top electricity creator,” Gascon and Crews said, noting that 16 years ago, natural gas produced one-third of the electricity that coal produced in the U.S.

"Wind and solar technologies, while not necessarily cost-effective for the U.S. as a whole, are more cost-effective than coal in some areas of the country even without any government support,” the authors said.

Coal mining employment has been declining since at least 1985, when data became available. According to the authors though, at the same time labor productivity in U.S. coal production has increased steadily for over three decades, as firms have moved toward complete automation of the mining process. For example, the amount of coal produced by the average mine worker more than tripled from January 1985 to May 2017.

In addition, “natural gas’s price advantage has resulted in coal-fired electricity plants across the country being shut down or retooled for natural gas-fired energy production,” they wrote.

In its 2017 Annual Energy Outlook, the U.S Energy Information Administration (EIA) noted that the move away from coal-fired electricity production will likely continue. The authors pointed out that, according to EIA’s base scenario, electricity production from renewable resources will surpass that of coal by 2030. In addition, labor productivity gains in coal production will further reduce employment in the industry.

However, Gascon and Crews noted there are two areas worthy of optimism:

They added that the U.S. Department of Energy recently announced it has allocated $7 million toward research on the economic viability of extracting coal from existing mines and removing the carbon from the coal in order to obtain any rare metals within.

“If new trends in electricity production continue, coal power plants may eventually become obsolete,” the authors concluded. “But if the energy sector has taught us anything, it’s that we can’t rely on trends. New technologies are constantly reshaping our existing industries, and the coal industry could be no different.”

By posting a comment you confirm that you have read and accept our Posting Rules and Terms of Use.
Advertisement
RELATED ARTICLES
A Comeback for Coal May Be Hard to Engineer
Fossil Fuel Use for Power Fell in 2017, EIA Says
Blame Economics, Not Regulations, for Coal's Decline, Study Says
Cheap Gas and Technology Are Killing Coal, Fed Paper Says
Which basin produces the most coal? The answer may surprise you
Advertisement