Fossil Fuel Use for Power Fell in 2017, EIA Says

The trend has been driven by a drop in the use of coal and petroleum. That drop was offset somewhat by an increase in the use of natural gas. Changes in the fuel mix and improvements in electricity generating technology have also led the power sector to use fewer fossil fuels, EIA says.

Declining trend in fossil fuel use for power generation. Source: EIAIndeed, a December 2017 paper from the St. Louis Federal Reserve Bank said that cheaper alternative energies are the main factors driving the decline of U.S. coal consumption and production.

“Some have attributed coal’s misfortune to increased regulation on carbon emissions,” wrote the authors. “Although regulation increases costs for coal producers, coal’s main problem is technology that has reduced the cost of competing sources of energy.”

Depressed global demand for coal has driven down prices and hurt producer profits. This, in turn, has hit U.S. coal mining employment, which is down 42 percent from its high in 2011. 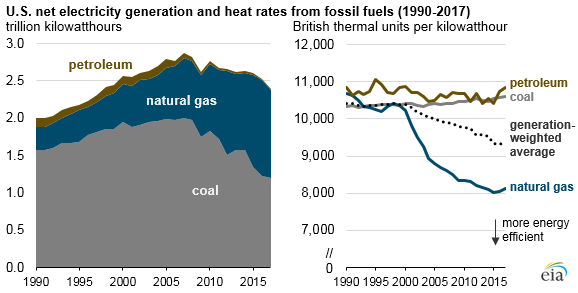 In energy-equivalent terms, more coal was consumed in the power sector than natural gas in 2017, at 12.7 quads and 9.5 quads, respectively. However, in terms of electricity generation, natural gas-fired power plants produced more electricity than coal-fired plants, at 31 percent and 30 percent of the U.S. total, respectively, in 2017. Natural gas-fired units tend to be more energy efficient, requiring less energy content to produce a unit of electricity. 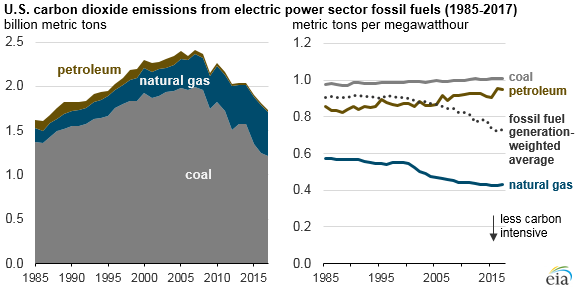 As natural gas-fired technology has expanded and become more efficient, the generation-weighted average efficiency among fossil fuel-fired electricity generation has improved. In 1994, fossil fuel power plants required 10,400 British thermal units (Btu) of primary energy to produce each kilowatthour; by 2017 that rate had fallen to 9,400 Btu/kWh, indicating a more efficient use of each unit of energy.

EIA says that these changes in energy consumption and efficiency have also affected carbon dioxide emissions from the electric power sector, which in 2017 were the lowest since 1987. Because coal combustion is much more carbon intensive than natural gas combustion, CO2 emissions from coal were more than double those from natural gas in 2017, even though natural gas provided more electricity generation.

By posting a comment you confirm that you have read and accept our Posting Rules and Terms of Use.
Advertisement
RELATED ARTICLES
EIA tracks US power plant conversion efficiencies
Gas-fired power generation is leaving coal in the dust
Coal Use Falls as Power Sector Shifts to Gas
Efficiencies Improve for Natural Gas Power Plants, EIA Says
Renewable Energy’s Share of Power Generation to Jump: EIA
Advertisement