Human beings and robots are working side by side at the Smart Production Lab in Volkswagen's Wolfsburg plant—a configuration made possible because the robots have been taught to show consideration for their co-workers.

The robots grab and install transmission shafts and clutch rings—which is nothing out of the ordinary for a vehicle manufacturing plant—except that they are not performing their work behind a safety barrier. When a person approaches a robot, the machine immediately slows down, moving its arms out of the way while attempting to carry on working. 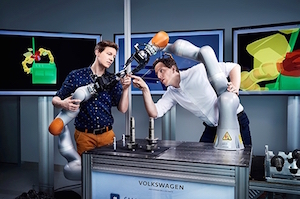 The brains of the smart robot are in custom software that processes waves and gestures, calculates all sequences of human motion recorded by the sensors around the robot's working area and evaluates the results. A wave from Hackenberg is sufficient to stop the robot. He waves again and the machine continues its work or hands over components and tools.

In Volkswagen's vision of the digitalized factory of the future, machinery and equipment, robots, goods and products will be networked with each other. People and robots will no longer work on a component beside each other or after each other but, rather, at the same time acting in cooperation.

"Up to now, it has been necessary to ensure physical separation between the working steps and working areas of people and robots,” Hackenberg says. "This is not genuine cooperation. We have integrated a proprietary robot and sensors using software in such a way that workers and robots can use the same working space without any hazards and can even interact."

In developing the system, the lab cooperated closely with scientists from the Robotics Innovation Center of the German Research Center for Artificial Intelligence, in Bremen, in which Volkswagen recently acquired a stake. One of the first results of this partnership was the software that allows direct cooperation between humans and robots, which can be applied to other industrial robots as well.

While human workers in the factory of the future will be required to perform complex tasks with high levels of specialist expertise, creativity and problem-solving capabilities, Hackenberg says robots—with integrated sensors to allow for their safe operation among humans—will assume more responsibility for ergonomically difficult, physically strenuous work.

By posting a comment you confirm that you have read and accept our Posting Rules and Terms of Use.
Advertisement
RELATED ARTICLES
Study: Fast robots may demoralize human co-workers
Report: Industrial robots increase co-worker substance abuse, mental-health issues
Report: Manufacturers suggest robots are not taking over jobs in the manufacturing space
3 Robots Will Work Construction Starting This Fall
Purdue researchers develop smartphone app that enables users to program robots to do mundane tasks
Advertisement