Robots will construct buildings in Japan this fall as Shimizu Corp., one of Japan’s top contractors, uses autonomously controlled construction robots for a range of tasks.

Testing is currently underway at a robot laboratory at Shimizu's Institute of Technology in Etchujima, Tokyo. The robots play various roles, such as moving materials horizontally, welding steel columns and installing ceiling boards. Plans call for the robots to be deployed to a high-rise building site in Osaka and at several large construction sites in Tokyo.

The construction firm says its move to robots stems from a concern over a "large exodus of skilled workers" from the profession and demand for higher productivity. In 2016, the firm started development of the $10 million Shimz Smart Site, a production system in which robots and humans collaborate on construction projects.

The robots include a Robo-Carrier, which moves materials horizontally; a Robo-Welder, which welds steel columns; and a Robo-Buddy, a multipurpose robot that handles construction work for ceilings and floors. Onsite, an operator uses a tablet to send instructions that the robots carry out autonomously.

A 2017 study by researchers at the Massachusetts Institute of Technology (MIT) and Boston University suggested that a single industrial robot may reduce employment by 5.6 workers and depress wages by 0.25 percent to 0.5 percent.

Researchers Daron Acemoglu of MIT and Pascual Restrepo of Boston University focused on industrial robots, which they said rose fourfold in number in the U.S. and Western Europe between 1990 to 2007, or around one robot for every thousand workers.

The researchers cited International Federation of Robotics (IFR) estimates that anywhere from 1.5 and 1.75 million industrial robots are currently in operation. That number could increase to 4 to 6 million by 2025. 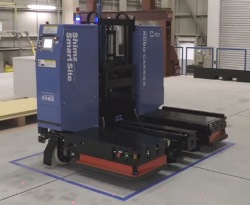 The Robo-Carrier being tested by Shimizu links with a temporary elevator to transport supplies to the designated spot entirely unmanned. On the way, the robot recognizes obstacles and reroutes on its own to avoid them. A collision prevention feature will stop the robot if a person comes near.

To maintain an awareness of its position, the Robo-Carrier uses lasers to obtain real-time spatial data which it compares with other spatial data. At the lab, the robot is able to lift a pallet weighing around one ton. 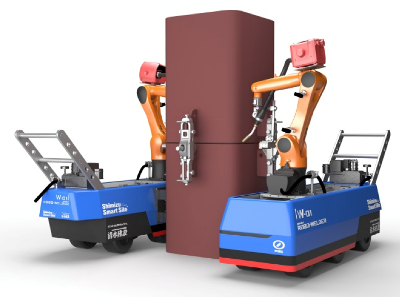 Pair of robo-welders at a column. Source: ShimizuThe Robo-Welder has a robotic arm that uses laser shape measurement to determine the contours of a groove, or channel, on a steel column to be welded. The robotic arm, with freedom of movement along six axes, performs the welding. Two Robo-Welders usually work together on one column. 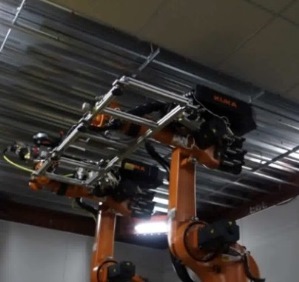 Robo-Buddy work on a ceiling panel. Source: ShimizuThe Robo-Buddy has full control over two robotic arms with freedom of movement along six axes. After sensors recognize the position of the ceiling grid frame material to insert ceiling suspension bolts, one arm lifts a ceiling board to the correct position, while the other arm screws the board to the base material.