Fluid power is breathing life into a trio of designs aimed at advancing robot technology.

Functioning as a constant-force air spring, the pneumatic actuator exerts preload force against the hydraulic cylinder. This arrangement allows robot joints to move in two directions, but with only half the number of often-bulky hydraulic lines required by a completely hydraulic system. 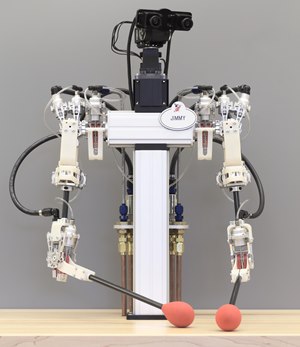 A robot built by Disney Research relies on a hybrid hydraulic-pneumatic transmission for precise control.According to Whitney, the pneumatic preload pressure at the joint eliminates backlash by pre-tensioning the timing belts driving the system’s output shaft. In addition, he says, the cylinders feature rolling diaphragm seals, which substitute rolling for sliding motion and therefore produce almost no static friction during the stroke.

Whitney and his colleagues used the transmission to animate an upper-body humanoid robot designed for safe and lifelike interaction with people. The robot consists of an upper torso along with two light arms and a head fitted with stereo cameras that stream video to an operator who wears a virtual-reality headset. Visually immersed in the robot’s workspace, the operator moves the arms of a remote controller and the robot responds in real time.

Thanks to the transmission, which accurately relays forces due to its low friction and lack of play, the operator is able to feel the actual forces the robot experiences as it interacts with its environment. The designers claim this haptic feedback allows control precise enough for the robot to perform delicate tasks such as threading a needle or picking up an egg.

Possible real-world applications for the transmission include human-operated remote manipulation for microsurgery and hazardous material handling. In addition, Whitney says that motors could be attached to each transmission input to create fast-moving robot arms. The motors could be mounted in the robot’s base rather than carried by the arms, making the arms lighter and suitable for human-robot interaction.

Another recent development featuring pneumatic components expands the reach of robot hands. Current industrial robots are specialists that generally excel at the specific tasks they’re designed form but unable to handle much if anything beyond these tasks. Viewing such robots as inadequate for many situations, researchers from the University of Washington have come up with a robot that they say can learn new tasks over time and without human assistance.

The researchers believe their Adroit manipulation system is a step toward the creation of “generalist” robots capable of performing complex tasks in places such as healthcare facilities, spacecraft and even the home, where automated “butlers” may someday handle many different chores.

Pneumatic components are key to the Adroit system, an algorithm-controlled robot hand viewed as a step toward “generalist” robots. “You can’t afford to fill up your house with 100 robots, one for each task,” says Vikash Kumar, lead researcher for the Adroit project. “That’s why it’s important for robots to be able to learn how to extend their knowledge to [master] new tasks they will be asked to perform.”

Working in UW’s Movement Control Lab, the researchers built a five-fingered robot hand with 24 degrees of freedom (DOF), mounted on a 4 DOF arm. The system is equipped with roughly 135 sensors (that measure things such as joint angles and the hand’s mechanical “tendon” forces and length), as well as external cameras that observe objects manipulated by the hand.

Controlling the hand are machine-learning algorithms that use data from past failed attempts to perform a task in order to improve subsequent attempts without additional human programming. The hand’s trial-failure-learning process continues until the robot has mastered the task.

The hand’s actuator unit consists of commercially manufactured double-acting cylinders to control actuation force in opposite directions. Kumar says that pneumatic actuators were chosen because of their reliability, compactness, and high force-to-weight ratio. The actuators feature a custom-designed glass chamber that allows smoother hand motion by reducing friction and stiction when the actuators are in motion.

All these special features and capabilities didn’t come cheap. “Since this is a research prototype, precise and high-cost components were chosen to answer our technical questions,” Kumar says of Adroit, which cost about $300,000. But for commercial use, he says, costs can be brought down by using less expensive components if the application allows it, or even eliminating components such as pressure sensors that may not be necessary in some situations.

A third advancement puts hydraulics to work to automate surgery. While current robotic surgery is guided by a human surgeon, the creators of a new surgical robot claim it can precisely stitch soft intestinal tissue with no human guidance.

Called STAR (short for Smart Tissue Autonomous Robot), the robot was developed by a team of researchers led by Peter Kim, a pediatric surgeon and vice president of the Sheikh Zayed Institute for Pediatric Surgical Innovation at Children’s National Medical Center in Washington, D.C. In what was reported as a robotic first, STAR recently performed autonomous soft-tissue surgery on living pigs, suturing together severed segments of tubular bowel intestine under human supervision but without the human surgeon’s guiding hand.

What’s more, to the surprise of Kim and his colleagues, STAR produced better surgical outcomes than experienced surgeons using open, laparoscopic and robot-assisted surgical techniques. “I think it has to do with the fact that [STAR] does things more consistently and makes less errors in terms of variations of technique,” Kim says. 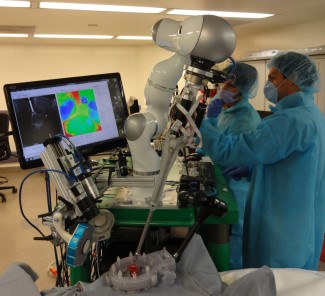 With its hydraulic arm wielding a surgical tool, STAR is billed as the first robot to autonomously perform soft-tissue surgery.On the downside, STAR was slower than a human performing open surgery. STAR’s creators, however, claim they can run the robot faster but didn’t do so because they were focused on surgical outcomes.

During surgery, STAR wields an off-the-shelf suturing tool used by human surgeons. The tool is attached to a robotic positioning system with three joints and 7 DOF. Made by the German firm Kuka, the hydraulic arm is a lightweight robot designed to operate safely around humans in industrial settings.

Perhaps more important is STAR’s vision technology, which includes a camera that captures images in near-infrared fluorescent light. This helps the robot distinguish objects in a moving mass of soft tissue that can be a confusing sight to human surgeons. Working with the camera is a tracking algorithm that allows the robot to locate objects in three-dimensional space. STAR can determine the position of the surgical tool tip and other objects with sub-millimeter accuracy, Kim says.

With a successful trial behind them, Kim and his colleagues want to turn STAR into a commercial product that most hospitals can afford. “We need to productize the vision and algorithm parts of it, and we need the right partner,” Kim says, adding that discussions are under way with possible commercial partners.

For those uncomfortable with the idea of autonomous robots performing surgery on them, Kim points to the large numbers of people who are inadvertently harmed by human surgeons. Surgeons may have the best intentions and training, he says, “but ‘to err is human.’ So if a machine is capable of doing better than surgeons, why wouldn’t we want that?”

By posting a comment you confirm that you have read and accept our Posting Rules and Terms of Use.
Advertisement
RELATED ARTICLES
Supervised Autonomous Robotic Soft-Tissue Surgery Demonstrated
Surgical Robot Operates as an Efficient Sewing Machine
Robot performs surgery on pig tissue
Surgery Outcomes the Same for Robotic Surgeons and Human Surgeons
Automating healthcare: These robots are taking over surgical tasks
Advertisement