A robotic arm programmed to sew soft tissues together has demonstrated the potential for autonomous robots to improve the efficacy, consistency and functional outcome of surgical techniques. Clinical researchers from the Children’s National Health System in Washington, D.C., and Johns Hopkins University tested the suturing robot during an anastomosis procedure, in which two tubular structures such as blood vessels are joined. 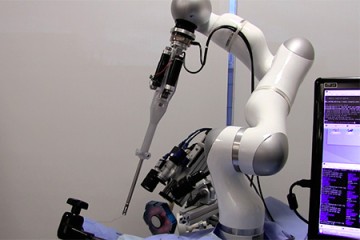 The work of five surgeons and STAR was compared in terms of suturing consistency and other metrics measured during the same procedure performed on pigs using three methods: open surgery, laparoscopic and robot assisted surgery. Researchers found that STAR needed more time to complete its operations than the surgeons in the open and robot-assisted procedures but was comparable to the laparoscopic procedure. The robotic procedure lasted 35-57 minutes, while open surgery took eight minutes.

According to measures of suture spacing, pressure at which the seam leaked and mistakes that required removing the needle from the tissue or restarting the robot, STAR’s performance was comparable or better than the surgeons.

By posting a comment you confirm that you have read and accept our Posting Rules and Terms of Use.
Advertisement
RELATED ARTICLES
Supervised Autonomous Robotic Soft-Tissue Surgery Demonstrated
Robot performs surgery on pig tissue
Breakthrough Robot Designs That Tap Fluid Power
Automating healthcare: These robots are taking over surgical tasks
Watch: AI and videos teach robot to suture
Advertisement