Researchers are investigating a new material that could help in nuclear fuel recycling and waste reduction by capturing certain radioactive gases released during reprocessing.

Conventional technologies to remove these gases—xenon and krypton—operate at extremely low, energy-intensive temperatures. By working at ambient temperature, the new material—a metal organic framework (MOF) abbreviated SBMOF-1—has the potential to save energy and make reprocessing cleaner and less expensive. The reclaimed materials can also be reused commercially. 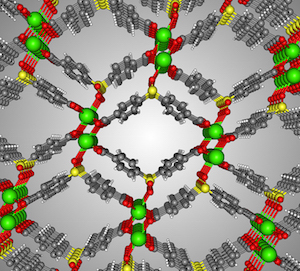 A molecular model of a new metal organic framework that selectively traps xenon, a gas released during reprocessing of nuclear fuel. Image credit: Courtesy of PNNL. "This is a great example of computer-inspired material discovery," says materials scientist Praveen Thallapally, of the Department of Energy's Pacific Northwest National Laboratory (PNNL). "Usually, the experimental results are more realistic than computational ones. This time, the computer modeling showed us something the experiments weren't telling us."

Thallapally, working with a team that included Maciej Haranczyk and Berend Smit, of the Lawrence Berkeley National Laboratory, has been studying MOFs that could potentially trap xenon and krypton without having to use cryogenics. These materials have tiny pores inside so small that often only a single molecule can fit inside each pore. When one gas species has a higher affinity for the pore walls than other gas species, MOFs can be used to separate gaseous mixtures by selectively adsorbing.

To find the best material for xenon and krypton separation, computational chemists led by Haranczyk and Smit screened 125,000 MOFs for their ability to trap the gases. The team's models identified the MOF that trapped xenon most selectively and had a pore size close to the size of a xenon atom, which they then tested in the lab at PNNL.

After optimizing the preparation of the material, SBMOF-1, Thallapally and his team at PNNL tested it by running a mixture of gases through it—including a non-radioactive form of xenon and krypton—and measuring what came out the other end. Oxygen, helium, nitrogen, krypton and carbon dioxide all beat xenon out. This indicated that xenon becomes trapped within SBMOF-1's pores until the gas saturates the material.

Other tests also showed that, in the absence of xenon, SBMOF-1 captures krypton. During actual separations, then, operators would pass the gas streams through SBMOF-1 twice to capture both gases.

The team also tested SBMOF-1's ability to hang onto xenon in conditions of high humidity. Humidity interferes with cryogenics, and gases must be dehydrated before putting them through the ultra-cold method, another time-consuming expense. SBMOF-1, however, performed admirably, retaining more than 85% of the amount of xenon in high humidity as it did in dry conditions.

The final step in collecting xenon or krypton gas was to put the MOF material under a vacuum, which sucks the gas out of the molecular cages for safe storage. A laboratory test examined how stable the material was by repeatedly filling it up with xenon gas and then vacuuming out the xenon. After 10 cycles of this, SBMOF-1 collected just as much xenon as in the first cycle, indicating a high degree of stability for long-term use.