Nuclear thermal propulsion (NTP) technology is being advanced for its potential to propel a spacecraft to Mars and back, using thermal energy from a reactor to heat an onboard hydrogen propellant. Coated reactor fuels designed to withstand the extremely high temperatures and corrosive conditions experienced in these systems have been developed by BWX Technologies. Two forms of such fuel have been delivered to NASA for testing in support of the Space Technology Mission Directorate’s NTP project.

Under the terms of a contract awarded to BWXT by U.S. Idaho National Laboratory earlier this year, the 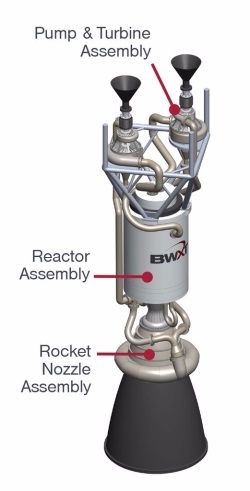 Spacecraft using NTP technology would have advantages over conventional chemical propellant designs, including lower mass and more propellant efficiency. NASA wants NTP reactors that heat hydrogen to an outlet temperature of 2700 K, which is consistent with a specific impulse of 900 seconds — about double the specific impulse that can be achieved with a chemical propellant rocket. The resulting increase in engine efficiency could reduce flight times and astronaut exposure to cosmic radiation.

A successful NTP program could be followed by nuclear electric propulsion, which would use its nuclear fuel to produce electricity, and then generate thrust by ionizing inert gas propellants (such as xenon and krypton) and accelerating the ions using a combination of electric and magnetic fields or an electrostatic field.

By posting a comment you confirm that you have read and accept our Posting Rules and Terms of Use.
Advertisement
RELATED ARTICLES
Nuclear rocket under development for cislunar space propulsion
DARPA, NASA develop rockets, space vehicles for cislunar space
Nuclear thermal systems advance for space propulsion
"Green" Propellant Could Fuel Rockets
Soaring through space on solar sails
Advertisement