Researchers at the University of North Carolina at Chapel Hill (UNC) have developed a technology to selectively remove americium from nuclear waste pools, potentially solving a decades-old problem. Their work, published in Science, adds a key step in completing the nuclear fuel cycle—an advance that could help power the world’s energy needs cleanly in the future.

Americium doesn’t have the same name recognition as a plutonium or uranium, but researchers have been trying to remove it from nuclear waste for decades. UNC researchers led Tom Meyer, professor of chemistry, and postdoctoral research fellow Chris Danes have found a way to remove the radioactive element using a technology closely related to that employed by Meyer at the UNC Energy Frontier Research Center of Solar Fuels to tear electrons from water molecules. 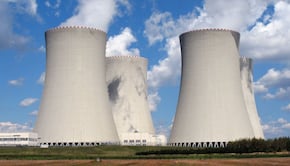 The advance could help power the world’s energy needs cleanly in the future. Image credit: Pixabay.In the americium project, Meyer and Dares adapted technology to tear electrons from americium, which requires twice as much energy input as splitting water. By removing three electrons, americium behaves like plutonium and uranium, which is then easy to remove with existing technology.

Meyer and Dares worked on the project with the Idaho National Laboratory (INL), which provided research support and technical guidance on handling nuclear materials. Most of the experiments were carried out in INL laboratories, which provided a safe area to work with radioactive material. Currently, INL and UNC-Chapel Hill are in discussion about extending the research and possibly scaling up the technology.

“With a scaled-up solution, not only will we no longer have to think about the dangers of storing radioactive waste long term, but we will have a viable solution to close the nuclear fuel cycle and contribute to solving the world’s energy needs,” says Dare.

What's the half life of the waste?