Researchers Find a Way to Isolate a Troublesome Element

A technology originally intended to tear electrons from water molecules in a solar electrolysis water-splitting process has been adapted to selectively remove one of the most recalcitrant elements in nuclear waste pools. The process developed at the University of North Carolina at Chapel Hill (UNC-Chapel Hill) could make nuclear waste storage safer. 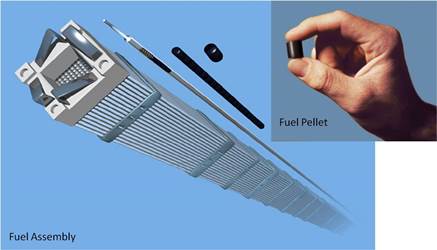 Individual fuel pellet and a fuel assembly unit. Image source: Duke Energy The element americium doesn’t have the same name recognition as a plutonium and uranium, but researchers have been trying to remove it from nuclear waste for decades. Several groups initially succeeded, only to be met with subsequent problems that rendered their solutions unworkable. The UNC-Chapel Hill team has found a way to remove the radioactive element without encountering similar problems downstream.

The approach is related to the one used at UNC to tear electrons from water molecules. The researchers modified the principles of a solar electrolysis process for application to nuclear waste treatment. In the americium project, researchers adapted the technology to tear electrons from americium, which requires twice as much energy input as splitting water. By removing three electrons, americium behaves like plutonium and uranium, which is then easy to remove with existing technology.

University researchers worked with Idaho National Laboratory (INL), which provided research support and technical guidance on working with nuclear materials. Most of the experiments were carried out in the laboratories at Idaho, which provided a safe area to work with radioactive material. At present, INL and UNC-Chapel Hill are in discussion about extending the research and to possible scale up of the technology.