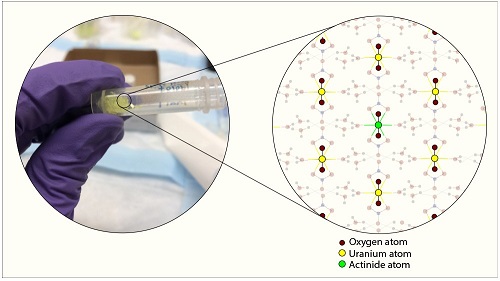 The process entails dissolving fuel rod components in concentrated nitric acid at 60 to 90° C. In tests conducted with a surrogate mix of uranium, plutonium, neptunium and americium, these elements separated out as the solution approached room temperature. These radioactive species of interest became bound within the structure of uranium crystals, facilitating their removal from solution and potential reuse in nuclear power production.

As plutonium is not isolated but is instead incorporated within the uranium crystals, the simple approach is proliferation-resistant and can be easily implemented at industrial scale. The actinide recovery process can also contribute to reducing the volume of radioactive waste requiring long-term storage.

Re: Recycling used nuclear fuel with a one-step strategy
#1

It would of been beneficial to list how much nuclear waste is still left in the rod after processing. The storage of nuclear rods poses a more serious threat to our planet than any other man made process. It's really absurd to let humans take care of something as lethal as spent rods for 10000 years!

Hopefully, this process will reduce or eliminate the threat of spent nuclear rods.

Re: Recycling used nuclear fuel with a one-step strategy
#3
In reply to #1
Lehman57

A more serious threat. I disagree; after reading about the huge amounts of plastics in the ocean and environment, could something like this be worse? And how about global warming with the CO2 and methane in the atmosphere?

Re: Recycling used nuclear fuel with a one-step strategy
#5
In reply to #3
PAPADOC

All you listed are bad but can be mitigated with time and effort. The release of radiation from the stored nuclear rods is instance. This could come from terrorists, earthquakes, conventional or nuclear war. And, this could happen within a 10000 year time frame! Do you trust humans to keep the spent nuclear rods safe for 10000 years?

Re: Recycling used nuclear fuel with a one-step strategy
#2

Congratulations on the recent process to recycle nuclear fuel rods!! I'm not any nuclear physicist or have any background in nuclear science but I'm a big fan of the process to recycle the nuclear waste we currently have. Would it be possible to get information (at the 10,000 ft level) about the single step process? General questions, such as:

Thank you for any information you could provide an interested fan. I really believe in reusing what we've already used and feel there is a place for nuclear power in regards to reusing this fissionable material. Small up-to-date SMR or MSR could use this fuel to generate hydrogen fuel for commercial use, trucking, planes, electric generation.

Re: Recycling used nuclear fuel with a one-step strategy
#4

Since this testing is on a laboratory scale, will it scale up to production levels? As others have asked, what is the percentage yield of this process, and how much of the fissionable material is left behind?

What happens if you add thorium to the mix? Will the resulting mixture be suitable for use as fuel in a fast (Generation IV) reactor?