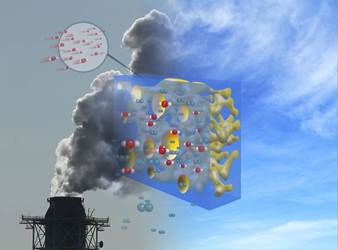 Polymer membranes often are preferred as a more energy efficient alternative to widely used amine adsorption technology. These membranes are relatively inexpensive and easy to work with, but current commercial membranes have low carbon dioxide permeability. To overcome this, scientists have developed hybrid membranes that are part polymer and part MOF. These hybrids harness the carbon dioxide selectivity of MOFs while maintaining the processing ease of polymers. However, the hybrids have not contained enough MOFs to form continuous channels through the membrane, constraining the molecule’s transport to the polymer.

Berkeley Lab scientists fabricated a hybrid membrane in which MOFs account for 50% of its weight, about 20% more than other hybrid membranes, without undermining structural integrity.

By posting a comment you confirm that you have read and accept our Posting Rules and Terms of Use.
Advertisement
RELATED ARTICLES
New Membrane Could Boost Efficiency of Carbon Capture
New Ways to Separate Your Methane from Your Carbon Dioxide
Porous Polymer Membranes with a Twist
MOFs effectively capture carbon from wet flue gas
Polymer membrane efficiently counters carbon dioxide emissions
Advertisement