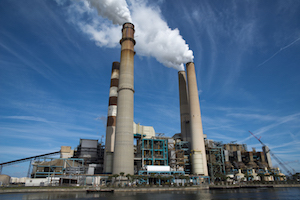 The membrane could yield more efficient ways of separating CO2 from power plant exhaust. Image credit: Pixabay. The researchers focused on a hybrid membrane that is part polymer and part metal-organic framework (MOF), a porous three-dimensional crystal with large internal surface area that can absorb large quantities of molecules.

“In our membrane, some CO2 molecules get an express ride through the highways formed by metal-organic frameworks, while others take the polymer pathway,” says Norman Su, a graduate student in the Chemical and Biomolecular Engineering Department at UC Berkeley and a user at the Molecular Foundry. "This new approach will enable the design of higher-performing gas separation membranes."

He conducted the research with Jeff Urban, facility director of the Inorganic Nanostructures Facility at the Molecular Foundry, and a team of scientists that included staff at the Advanced Light Source.

The conventional way of separating carbon dioxide from flue gas is amine adsorption, which isn’t economical at scale because it adds significant capital cost and reduces the electrical output of power plants. Scientists are exploring polymer membranes as a more energy-efficient alternative to amine adsorption.

In this latest research, MOFs account for 50% of the weight of the hybrid membrane—about 20% more than previously developed membranes whose mechanical stability limited the amount of MOFs that could be packed into them.

And 50% weight appears to be the optimal level. At that threshold, there are so many MOFs in the membrane that they form a continuous network of highways through the membrane.

“This is the first hybrid polymer-MOF membrane to have these dual-transport pathways, and it could be a big step toward more competitive carbon-capture processes,” says Su.