New Ways to Separate Your Methane from Your Carbon Dioxide 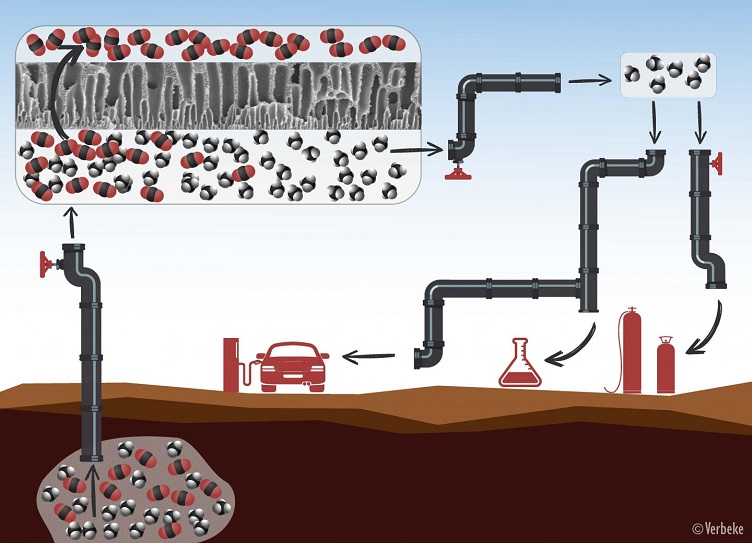 Methane is separated from carbon dioxide through the use of membranes. Image credit: KU Leuven - Verbeke.

Methane — the essential component of natural gas and biogas — is never found in its pure form. It needs to be separated from carbon dioxide to be used as a source of energy for heating, while the CO2 can be used as a building block for renewable fuels and chemicals.

The conventional way to accomplish this is through cryogenic distillation, which is both energy-intensive and environmentally unfriendly. A low-cost, low-energy, scalable alternative is the use of polymeric membranes. But those that are commercially available are limited by their permeability and selectivity tradeoff, as well as insufficient thermal and chemical stability.

"An effective membrane only allows the CO2 to pass through, and as much of it as possible,” says University of Leuven (KU Leuven) bioscience engineering professor, Ivo Vankelecom. "Another important problem is the fact that the membranes plasticize if the gas mixture contains too much CO2. This makes them less efficient: almost everything can pass through them, so that the separation of methane and CO2 fails."

As recently published in the journal Energy & Environmental Science, a collaborative study by KU Leuven and the University of Antwerp, both located in Belgium, focused on making the polymeric separation process much more effective. To that end, researchers introduced a novel type of amorphous mixed-matrix membrane, consisting of a metal-organic framework (MOF) with nanoscale pores.

The study showed that membrane performance improved significantly when heated above 160° C during the production process. “At these temperatures, the structure of the MOF changes, and it becomes more selective," Vankelecom explains. "The high-temperature treatment also improves polymer-filler adhesion — the gas mixture can no longer escape through little holes at the filler-polymer interface."

This gave the new membrane the highest selectivity ever reported.

"If you start off with a 50/50 CO2/methane mixture, this membrane gives you 164 times more CO2 than methane after permeation through the membrane,” adds KU Leuven's Dr. Lik Hong Wee. “These are the best results ever reported in scientific literature."

More information on the project can be found on the Membrane Technology Group website.

By posting a comment you confirm that you have read and accept our Posting Rules and Terms of Use.
Re: New Ways to Separate Your Methane from Your Carbon Dioxide
#1

Since Carbon Dioxide is roughly 100 times more soluble in water than Methane(see images below), I wonder how efficiently a water spray in a pressurized tank of the gases could operate. It seems like this would beat the efficiency of cryogenic separation if done at large scale. Spraying the water would vastly increase the surface area through which the carbon dioxide would dissolve. Remove(pump out) the excess fizzy water as it collects at the bottom of the tank. This would also leave other combustible gases like CO in the tank since its solubility is also way lower in water than carbon dioxide. Does anyone know why they do not do it this way ? I suspect that this could operate well at cool ambient temperatures so it should be easy to implement.

A quick search retrieved this(slightly rearranged to fit ...thanks, ETB):

The content in The Engineering ToolBox is copyrighted but can be used with NO WARRANTY or LIABILITY. Important information should always be double checked with alternative sources. All applicable national and local regulations and practices concerning this aspects must be strictly followed and adhered to. 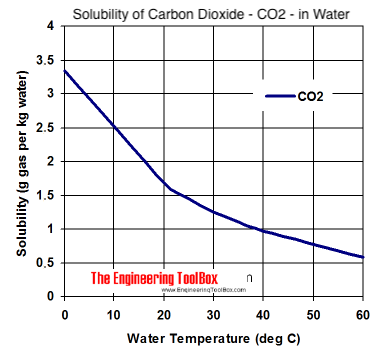 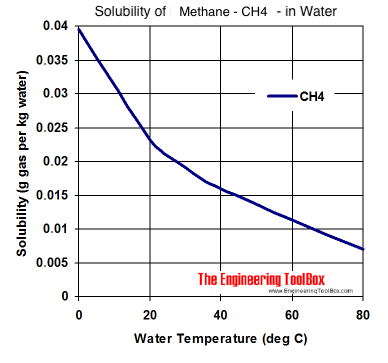 Re: New Ways to Separate Your Methane from Your Carbon Dioxide
#2
In reply to #1
JPOWERS

Re: New Ways to Separate Your Methane from Your Carbon Dioxide
#3
In reply to #2
thewildotter

Right. That is why I specified spraying the water(increases surface area), pumping out the fizzy water(avoid saturation), pressurizing the tank(partial pressure stuff), and generally outlining a continuous process(no batch size limitation interacting badly with time required to come up to pressure.) Your observation that it might proceed too slowly is valid and needs checking for specific design requirements. Good comment. Perhaps someone could run the numbers on some straw-man example to see if it ever wins against the discussion alternatives. I have the same problem this suggested approach might have, I would take too long to produce results. I realized the solubility advantage and felt it might trigger someone else to slog through the details of some nominal swag of a design. I have no experience with quantitative calculations of speed of dissolution for different temperatures, surface areas, pressures,etc. so I would have to study a bunch before I would be able to do my own swag.

Is anyone out there already fluent and game for this quest ?