The demand for smaller and less invasive surgical instruments has prompted Brigham Young University researchers in the U.S. to apply principles of origami to the design of surgical tools so small that incisions will heal on their own, without sutures. Origami-inspired devices can be inserted into an incision and deployed inside the body to perform a specific surgical function. 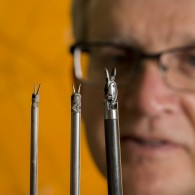 Spencer Magleby looks over origami-inspired surgical devices. Credit: Mark PhilbrickThe research team has developed design concepts that eliminate the need for pin joints and other parts. Instead, they rely on the deflection inherent in origami to create motion. One such design is a robotically-controlled forceps that can pass through a hole about 3 millimeters in size — about the thickness of two stacked pennies. A series of compliant mechanism technologies has been licensed to Intuitive Surgical, a robotic surgery firm and the maker of the da Vinci Surgical System (see video).

A device that starts out flat for insertion into an incision and then expands to become two rounded surfaces that roll on each other is also under development for spinal disc replacement.

The research on origami-inspired engineering appears in the academic journal Mechanism and Machine Theory.