The James Webb Telescope, developed in a collaboration between NASA, the European Space Agency and the Canadian Space Agency, is on its way. About 30 minutes after launch from French Guiana on December 25, 2021, the world’s most powerful telescope unfolded its solar array, and mission managers confirmed that the system was providing power to the observatory.

The 20 ft solar array consists of five panels connected by hinges for folding into the launch vehicle, the Ariane 5 rocket. The telescope’s onboard battery was designed to only last a few hours, so activation of the array was considered one of the most critical early steps of the telescope’s voyage. 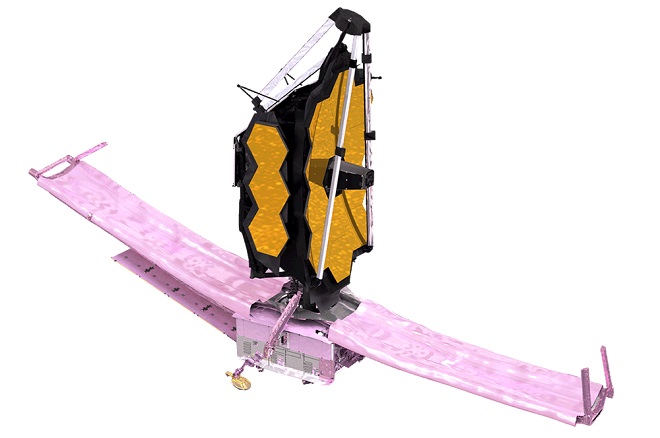 After solar array deployment, mission operators will establish a communications link with the observatory via the Malindi ground station in Kenya, and ground control at the Space Telescope Science Institute in Baltimore will send the first commands to the spacecraft.

The observatory will travel to an orbit about one million miles away from Earth and undergo six months of commissioning in space — unfolding its mirrors, sunshield and other smaller systems; cooling down; aligning; and calibrating. The telescope is designed to provide improved infrared resolution and sensitivity relative to its predecessor, the Hubble Space Telescope, and will enable diverse investigations across the fields of astronomy and cosmology, including observations of the formation of the first galaxies and allowing detailed atmospheric characterization of potentially habitable exoplanets.