NASA's James Webb Space Telescope is closer to launch with the completion of cryogenic testing on its science cameras and spectrographs and the installation of the final flight mirrors.

After almost four months of final cryo (cold) testing and monitoring, the science instruments module of the observatory have now been removed from the giant thermal vacuum chamber at NASA's Goddard Space Flight Center in Greenbelt, Maryland known as the Space Environment Simulator (SES), which duplicates the vacuum and extreme temperatures of space. The SES is a 40-foot-tall, 27-foot-diameter cylindrical chamber that eliminates almost all of the air with vacuum pumps and uses liquid nitrogen and even colder gaseous helium to drop the temperature. 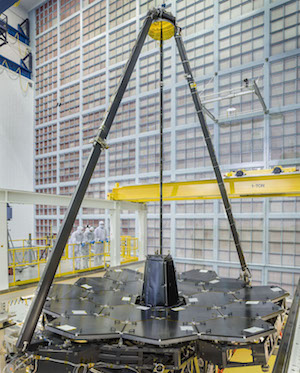 The telescope's primary mirror sits in the cleanroom at NASA Goddard Space Flight Center. Image credit: NASA/Chris Gunn. "We needed to test these instruments against the cold because one of the more difficult things on this project is that we are operating at very cold temperatures," says Begoña Vila, NASA's cryogenic test lead for the Integrated Science Instrument Module (ISIM) at NASA Goddard. The ISIM is one of three major elements that comprise the James Webb Space Telescope Observatory flight system.

The testing is critical because at the instruments' final destination in space—one million miles from Earth—they will operate in incredibly cold temperatures of minus 387 degrees Fahrenheit, or 40 degrees Kelvin. This is 260 degrees Fahrenheit colder than any place on the Earth’s surface has ever been.

The science instrument modules tested consist of the mid-infrared instrument (MIRI), jointly developed by a nationally funded European consortium under the auspices of the European Space Agency (ESA) and the Jet Propulsion Laboratory; a near-infrared spectrometer (NIRSpec), jointly developed by Airbus for ESA and the U.S.; the Fine Guidance Sensor/Near-InfraRed Imager and Slitless Spectrograph, provided by the Canadian Space Agency and developed by COM DEV International; and Near-Infrared Camera (NIRCam), built by a team at the University of Arizona and Lockheed Martin's Advanced Technology Center.

On March 6, 2016, shortly after the successful instrument testing, the last mirrors in Webb’s optical path were installed into the telescope. Now the telescope is officially optically complete.

Once launched into space, the telescope will capture faint light from the very first objects that illuminated the universe after the Big Bang. To make observations of galaxies and stars from that far away, the telescope has a unique set of mirrors: a 25-square-meter primary mirror consisting of 18 hexagonal concave segments, a secondary rounded, convex mirror, a tertiary concave mirror and a moveable turning flat mirror called the fine-steering mirror.

The Webb telescope’s primary mirror segments and secondary mirror are made of beryllium, which was selected for its stiffness, light weight and stability at cryogenic temperatures. Bare beryllium is not especially reflective of near-infrared light, so each mirror is coated with approximately 0.12 ounces of gold to enable it to efficiently reflect infrared light (which is what the Webb telescope's cameras see).

The anchor of the optical system is the last (third) set of mirrors—the tertiary mirror and the fine-steering mirror. These two mirrors are located inside the Aft Optics Subsystem (AOS), which is a phone booth-sized beryllium structure surrounded in black covering. It is located directly in the center of the primary mirror, and about half of it sticks up above the primary mirror.

The most powerful space telescope ever built, the Webb telescope will provide images of the first galaxies ever formed and study planets around distant stars. A joint project of NASA, the European Space Agency and the Canadian Space Agency, it is expected to be launched in October 2018.