What to consider when buying your first laser cutter or engraver

When considering a laser cutter or engraver, whether for a school, a new business or for an established operation looking to expand its capabilities, there are a range of choices at a variety of price points. Lasers can be fantastic and profitable tools, however, there are a number of aspects that one needs to consider in such a machine that may not be immediately evident.

This article will outline a few of the larger points to consider with such an investment and explore a few of the more subtle aspects of the decision that one might not otherwise think of until the laser is in operation. 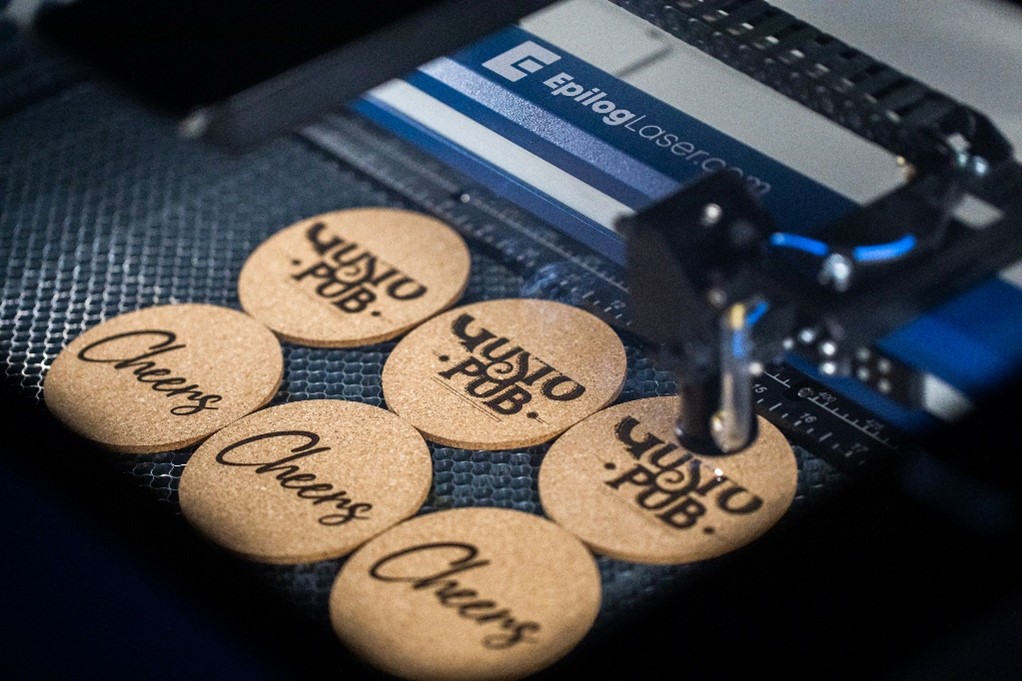 While Epilog sells fiber lasers, especially appropriate for marking metals, this article will focus on CO2 units. CO2 devices are the most common laser sold by Epilog and may be employed for cutting or engraving softer materials like wood and many types of plastic and can even mark metal with the proper material preparation.

When specifying a CO2 laser, one of the most important things to consider is the bed dimensions in the X and Y directions, which will normally need to meet or exceed the size of the materials. One should not neglect the vertical Z axis either, which will dictate how thick an object can be for engraving. For example, engraving art on a thin notebook computer would require very little Z travel, though if a guitar was the engraving target, one would need both an adequate X and Y surface, as well as several inches of Z travel to allow it to fit in an enclosure.

While bigger is generally better, users should also consider that as the internal X and Y dimensions grow, shop space needed for such a laser will grow as well, and that the exterior of a properly encased laser will always be larger than the bed size. Add to that space for materials and accessories, like an exhaust fan and materials storage, and whether or not there is enough room to house such a setup can be a real concern.

Potential laser users will also want to consider the device’s power output. Inexpensive diode lasers, which tend to come in the single or low double-digit ranges, may be capable of engraving but generally cannot cut effectively beyond paper products and other thin materials. CO2 lasers, such as those sold by Epilog, are available in the 30 W to 120 W range, allowing them to engrave at high speeds, and cut through thicker materials such as plywood and acrylic sheets. Cutting such materials would be largely unimaginable with low-power diode lasers.

The basic rule when using a laser is that the more powerful the beam, the faster it is able to cut. While a 30 W and 120 W laser might both be able to do a certain job, the 30 W device will be much slower. While one system might be appropriate for intermittent jobs, if a laser is put into heavy use, investing in a more powerful unit up front in order to avoid needing multiple lasers as usage ramps up may be well worth it.

Notably, Epilog uses metal and ceramic laser tubes, as opposed to less expensive glass-based tubes, to produce beams. Not only are metal and ceramic tubes more durable, but they are also air cooled. Glass tubes require the use of external water reservoirs, pumps and even chillers, depending on the environment and use cases, to dissipate heat. Using a metal or ceramic tube saves workshop space, as well as setup and maintenance complication.

Additionally, non-branded lasers have been known to ship with laser generating glass tubes, which are less capable than advertised (for instance, a “60 W” laser may only be 50 W). Epilog lasers will at a minimum meet the advertised spec, and in fact exceed the power rating in many cases.

Beyond tube design, lasers can be set up with different types of focusing lenses. An engraving-style lens brings the laser light to a sharp focus at a precise point, allowing for incredible detail. The caveat is that this sharp focus soon expands, so if the goal is to cut into a material the tight beam at the top becomes wider, less powerful and less focused by the time it hits the bottom of thicker materials. Cutting beams are less focused to a point but stay at an acceptable beam tightness for longer. One might say a cutting beam has a wider depth of field, to borrow a photography term.

Epilog features a series of focus lenses that can be utilized to meet each particular situation and is happy to advise on which lens or lenses a customer should consider. In the case of lesser known brands, users may not know the type of lens that is included with a laser until it arrives, and replacement can be less than straightforward.

When one purchases a 2D computer printer today, it is more or less expected to work once plugged in. Epilog believes that using a laser should be as close to that experience as possible. For larger lasers, one will of course need to designate space for the unit itself and associated accessories, but software setup is essentially a matter of using Epilog’s print driver, along with the Job Manager for additional features. Laser users can take advantage of standard design software, like CorelDraw or Adobe Illustrator, to create art and other designs, which can then simply be output to the laser in a similar manner to how a printer works.

Other lasers may require the use of proprietary or purchased software for control and offer limited to nonexistent support. Another software alternative employed is a sort of “laser-as-a-service” subscription model, paid for on a month-by-month basis in order to use the laser. Even if such a pricing structure is acceptable, this type of service does not work without an internet connection. If the host service goes down for whatever reason, production will be stalled, which is an unacceptable scenario for time-critical tasks. Epilog does not require continuing subscription fees for the use of their software, and internet connectivity is not needed for operation.

While the software is meant to integrate seamlessly with existing drawing packages, Epilog continues to innovate. In 2019, they premiered their Fusion Pro Laser series, which is capable of engraving at a staggering 165 inches per second and features the IRIS camera positioning system. This incorporates overhead cameras to show the user how a superimposed image of an engraving will look on the item itself, and allows for adjustments before starting the job.

Imported lasers may take a significant amount of work to set up before cutting and engraving can be accomplished safely and effectively. This can include fine tuning the movement system to ensure that the laser is aligned properly, or larger tasks like installing an interlock or other modifications for safety and usability. For competent technicians and engineers used to working with factory-style automation, this may be a surmountable task. However, for those who are not skilled enough to work inside the panel of a high voltage machine, a ready-to-go solution may be a much better option even if the nominal price is higher.

Even for those who can competently perform such work, there is a cost in terms of time and materials. This begs the question of whether the laser is the project, or is it the tool? For businesses that need a reliable machine that works out-of-box, paying a premium for a high-quality device with U.S.-based support may be well worth it. In the current environment of supply chain disruptions and delays, working with a top-of-the-line laser manufacturer that can actually be contacted is perhaps an even more valuable service than it was just a short time ago.

When maintenance is needed, or when the time comes for necessary upgrades, Epilog is here to help. This could mean fitting a rotary attachment to allow a machine to engrave cylindrical surfaces, a new focusing lens setup or even a new laser altogether. They provide service and advice for all machines that they manufacture, even supporting lasers that were purchased secondhand. 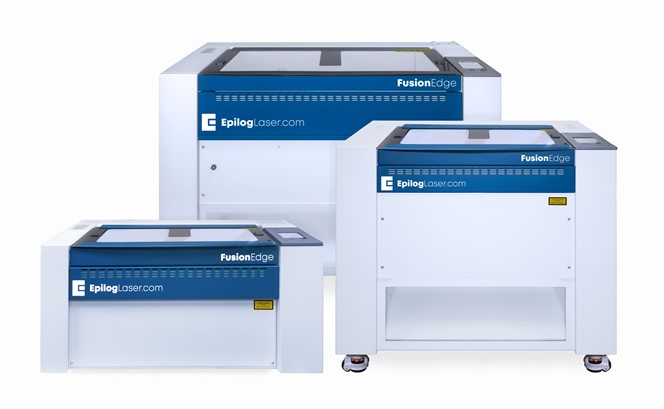 CO2 lasers use an infrared beam for cutting and engraving. These cannot be seen by the human eye but are extremely dangerous if not properly contained. Unlike less expensive lasers of unknown manufacture, all Epilog enclosures are rated as Class 2, meaning they are rated to contain such beams, and interlocks are employed to ensure the system is fully closed when the beam is active. These safety measures allow users to operate the laser without safety concerns, or even the use of laser safe glasses when in the vicinity of the machine.

In addition to laser risks, certain materials should not be cut or engraved with a laser due to melting concerns and their potential to release toxic fumes — most notably chlorine. Epilog addresses these issues here, and stands ready to answer any further questions as needed. Even for those materials that are appropriate to cut, adequate fume extraction is needed to clear smoke from the work area. Epilog can advise on those concerns as well, and some Epilog distributors sell fume extraction systems.

Epilog Laser was created in 1988, with the concept of bringing CO2 laser technology to commercial manufacturers and business owners. They are centrally located in the U.S. in Golden, Colorado, and Epilog equipment can be found in a wide variety of settings: from sign shops, to schools, to industrial manufacturing facilities and more.

Throughout over 30 years of operation, Epilog has stood behind customers to promote their success, and offers a two-year warranty on new equipment. A list of laser applications and uses is found on Epilog’s website, along with a series of customer profiles. They also feature a variety of instructional videos on their YouTube channel. For more information, specifically on starting a new laser business, Epilog has a guidebook for establishing a new operation, and customers can get in touch with them here.

By posting a comment you confirm that you have read and accept our Posting Rules and Terms of Use.
Advertisement
RELATED ARTICLES
Why You Should Check Out Laser Engraving at the Next Maker Faire
Bring Your Creative Visions to Life with Epilog Laser!
Finding middle ground: Epilog Fusion Edge
Epilog G2 – An Air-cooled, Pulsed Fiber Laser for Laser Marking Applications
3 New Industries Making their Mark with Lasers
Advertisement 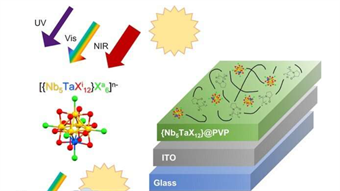