Concept for a compact tokamak design

A new design is proposed for a compact fusion reactor that can generate electricity and help define the technology necessary for commercial fusion power. 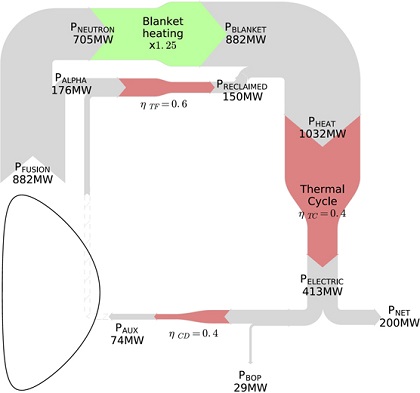 Power accounting from simulations for a CAT electric pilot plant. Source: R.J. Buttery et al.typical pulsed configurations, allowing it to be built at a reduced scale and cost.

The design evolved from first-of-a-kind reactor simulations that leverage the latest physics understanding of the current-carrying gases known as plasmas to raise performance. Increasing the pressure inside the tokamak can lead to current reductions which in turn make the plasma easier to sustain and more stable. Simulations show that by carefully shaping the plasma and moving the current toward its edge, turbulent heat losses can be suppressed to support higher pressures at lower currents and reach a state where the plasma sustains itself. CAT drives most of its own current during operation, reducing the need for expensive current-drive systems that consume generated power and reduce the plant’s efficiency.

The increased performance and energy containment of the CAT approach outlined in the journal Nuclear Fusion enables it to operate at lower plasma current than pulsed concepts. This, and continuous steady-state operation, reduce stress on the device and lower risks to machine integrity, making for a more robust, compact design with lower heat loads.

Re: Concept for a compact tokamak design
#1

That is a pipe dream with so many problems still to solve. On the other hand, Brillouin Energy, having raised < $20MM since 2009, already has 5 fully functional CECR systems running nearly 24x7. Those systems are now able to capture more thermal energy in water than electricity out of the wall. With a $30MM investment Brillouin Energy will likely have an OEM licensed product in 24 to 36 months. Scaling is straightforward and system was designed from the start for mass production.