The costs, concept design and timeline for the first fusion facility to generate more energy than it consumes 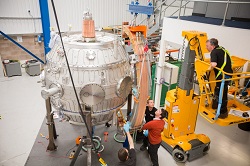 The facility will be centered on a new tokamak, which is expected to be about three to four times larger than Tokamak Energy’s current prototype device, the ST40, which is 4-m tall and 2.5 m in diameter.

First plasma was achieved in the prototype at the end of April, after which large toroidal field coils were added to the machine.

Tokamak Energy is pursuing a five-stage plan toward producing fusion power. The next stage is to reach fusion temperatures of 100 million degrees in the ST40 in 2018, followed by production of high density plasmas. First electricity with a 'Fusion Power Demonstrator' is scheduled by 2025, and commercially viable fusion power with the first 'Fusion Power Module' is slated for 2030.

By posting a comment you confirm that you have read and accept our Posting Rules and Terms of Use.
Advertisement
RELATED ARTICLES
Video: First Plasma for Compact Tokamak in UK
Watch: Tokamak Prototype Heats Up to 15 Million Degrees Celsius
Tokamak Energy accelerates the development of fusion power
MIT Announces a Working, Pilot Commercial Nuclear Fusion Reactor is 15 Years Away
Wanted: UK site for first commercial fusion facility
Advertisement