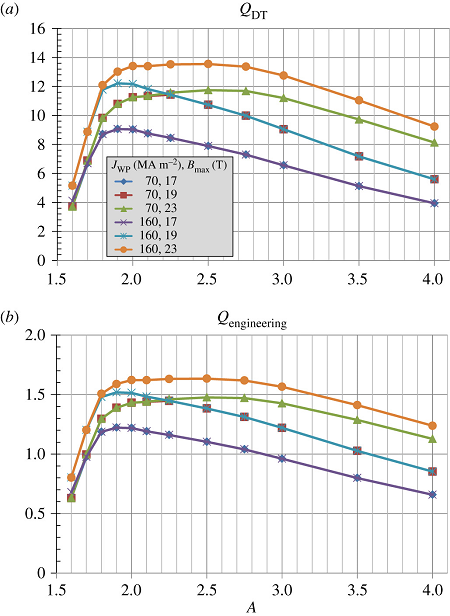 Compact tokamaks can produce high-pressure plasmas that are essential for fusion reactions with relatively low and cost-effective magnetic fields. The study of development requirements for a spherical design, published in the Philosophical Transactions of the Royal Society A, considers the role of magnet engineering limits and plasma core confinement and stability limits on fusion performance with varied aspect ratio in the center of the tokamak that holds and shapes the plasma. Lower aspect ratios, which can be half the size of that in conventional tokamaks, are expected to improve plasma stability and confinement.

The thick shielding required for superconducting magnet protection from neutron bombardment damage and heating will reduce the footprint allocated for a transformer in a downsized device. Sustaining the plasma to generate 200 MW to 300 MW of electric power would also require higher confinement than standard tokamak operating regimes typically achieve.

This power production range could lead to fusion neutron fluxes that would limit the estimated lifetime of the magnets to one-to-two years of full-power operation. Thicker shielding could increase service life but would lower the delivery of fusion power. The viability of lower aspect ratio designs requires high toroidal field magnet current density, which could be feasible with development of conductor on round-core, high-temperature superconducting cables into large-bore toroidal field magnets.

By posting a comment you confirm that you have read and accept our Posting Rules and Terms of Use.
Advertisement
RELATED ARTICLES
Video: Commercial fusion turns up the heat
MIT Announces a Working, Pilot Commercial Nuclear Fusion Reactor is 15 Years Away
Video: Magnet protection magnifies fusion power potential
Watch: Tokamak Prototype Heats Up to 15 Million Degrees Celsius
Long-range plan for fostering US fusion energy
Advertisement