Shining the (UVC) light on COVID-19

Among the number of solutions to emerge from the COVID-19 pandemic to ensure that some semblance of normal life would go on — be it through contactless technologies, social distancing gadgets and a variety of coatings to protect surfaces, to name just a few — many are now incorporating ultraviolet (UV) light for its virus and bacteria killing properties.

Recent studies have confirmed that specifically, UVC light, which is UV light in the 100 nm to 280 nm range, can destroy bacteria and viruses including SARS-CoV-2, the virus responsible for COVID-19. Considered particularly effective in the 200 nm to 280 nm range against viruses and germs, UVC light damages the molecules necessary for viruses to survive. As such, it has been eyed for and subsequently incorporated into a number of solutions for combating COVID-19.

Following is a summary of the UVC light solutions to emerge from the COVID-19 pandemic.

Because the risk of illness and even death is considerable with the COVID-19 virus, it seems only natural that solutions for sanitizing public spaces would be automated. Joining the legion of robots to emerge in the fight against the global pandemic includes a number of robots equipped with germ-fighting UVC light.

MIT’s Computer Science and Artificial Intelligence Laboratory (CSAIL) has created a robotic system that disinfects surfaces and neutralizes aerosolized coronavirus particles using a UVC light fixture that is incorporated into an Ava Robotics’ mobile robot base.

The UVC array relies on short-wavelength UVC light to kill microorganisms, disrupting their DNA via a process known as UV germicidal irradiation.

Another robot, dubbed the GermFalcon from Dimer UVC Innovations, was designed to disinfect airplane cabins also using UVC light to inactivate viruses and bacteria on high-risk surfaces and in the air.

Meanwhile, researchers at the University of Illinois Urbana-Champaign have also constructed an autonomous UV disinfecting robot that will hasten the return of workers to the office and commuters to mass transit following the COVID-19 pandemic. 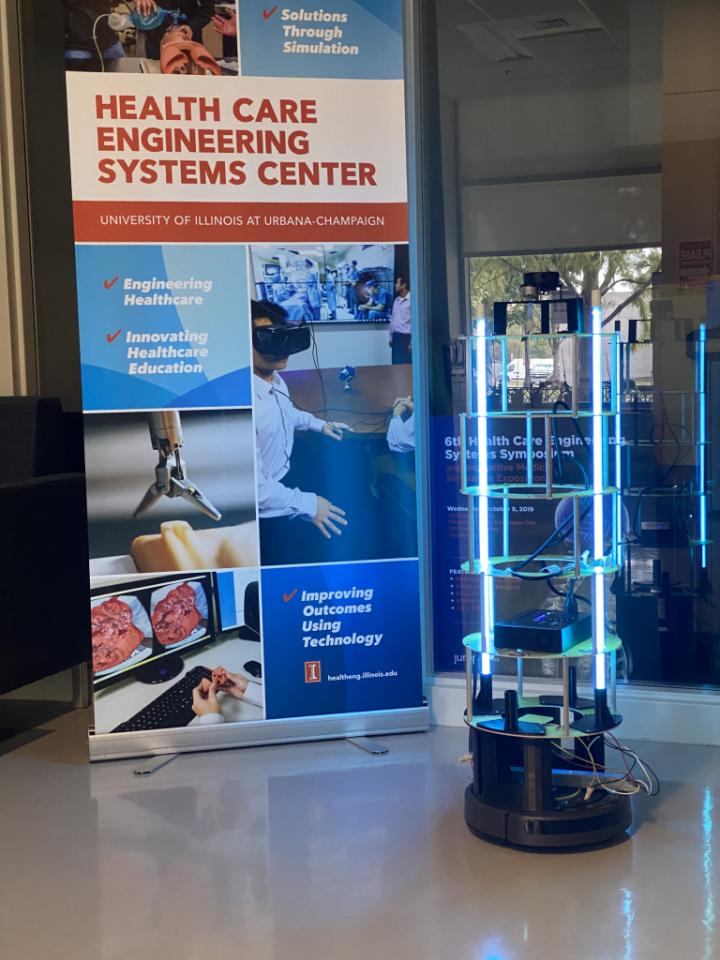 The so-called UVBot features a UV lamp, a Roomba vacuum cleaner and 3D-printed parts that attach the UV lamp to the Roomba.

According to its developers, the UVBot can be programmed to autonomously sanitize high-risk surfaces using UVC light.

The LG autonomous UV robot sanitizes high traffic public spaces, such as those found in the hospitality, education, retail, restaurant and transportation sectors as well as office settings.

Scientists from New York’s Rensselaer Polytechnic Institute (RPI) are exploring the use of UVC light to sterilize personal protective equipment (PPE) used by those on the front lines in the battle against the COVID-19 pandemic. According to the RPI scientists, thousands of face masks can be disinfected daily using UVC light to help fill the shortage of PPE supplies that plagued hospitals in the early days of the pandemic.

According to RPI, the disinfection device features two UVC lamp fixtures attached vertically at opposing ends of an 8 ft2 enclosure. A motorized conveyor pulls used masks through the enclosure and between the bulbs, exposing the used masks to a UVC light treatment. 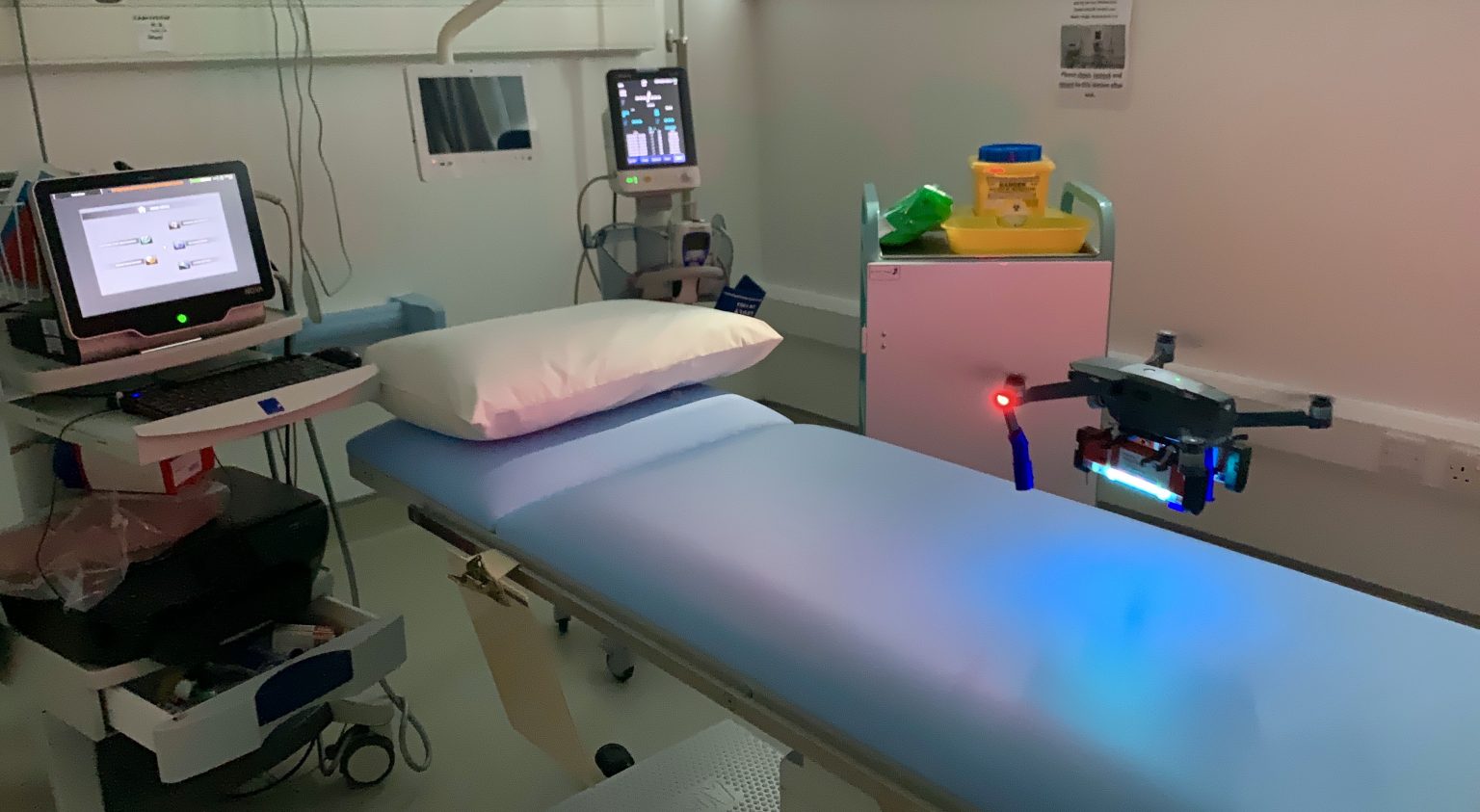 The drone has been employed in sterilizing high risk public spaces including restaurants, hospital wards, shopping centers and airports with rays from the UVC band of UV light, emitting high frequency, short wavelength bursts of radiation imperceptible to the human eye. Those rays are emitted over predetermined locations and at predetermined times — generally at night and when the space is unoccupied.

A team from the University of California, Irvine has found another potential use case for Blu-ray digital video discs: recovering diodes from those discs and turning them into deep UV laser photon sources to quickly disinfect surfaces and indoor air.

According to the research team, the UV laser photon sources could potentially be incorporated into masks, disinfecting the air that is both inhaled and exhaled by the wearer; built into air circulation ducts in buildings, disinfecting the air flowing through these systems; included in hand-held devices to treat surfaces; or transformed into light curtains that people pass through.

A UVC light device that continuously sanitizes handrails is being incorporated into escalators throughout the London Underground to restore confidence in mass transit amid the COVID-19 pandemic.

Once incorporated, the device’s UVC light-bulb is triggered by the movement of the escalator handrails. As the handrails move, UVC light continuously sanitizes the handrail surfaces, which pose a significant risk for COVID-19 transmission. According to reports, the UVC device improves sanitation efforts by 50%.

A UVC light-emitting appliance for the home

A company with ties to Nanyang Technological University in Singapore has created a bladeless fan that cools a room down while also disinfecting the air in that same enclosed space.

The vortex ceiling fan, which is called Vortec, is a combined ceiling fan and LED lamp that draws air up from the lower regions of a room and exposes it to a UVC light for disinfection and forces the recycled air out in a 360° arc. According to its developers, the Vortec’s UVC light kills viruses, including COVID-19, in the enclosed space.

Get out the vaccines and we don't have to worry about any of this.

253.7 nm kills this virus and other bacteria but you have to also have proper mw/cm this is the power needed in each event 190nm creates ozone or o3

220 nm creates ozone which is harmful to people, the range is 250 to 265 nm is the most effective at destroying the dna,rna of these viruses in which these ranges are harmful to people but can be used to decontamination areas without the worry of photoreactivation a simple formula to use is d=it

The potential damage to skin and eyes was not mentioned in this article. UVC light cannot be used with humans present.

UVC in the 222nm wavelength has been repeatedly shown to be harmless to humans and deadly to SARS virus variants in seconds and should have been massively pushed forward months ago. The most common UVC @ 254nm will kill the virus but IS harmful to humans. Why the 222nm variant is being ignored boggles my mind.

Actually, I am in UV industry, although a lot of reports and news show that 222nm uvc light is harmless for human body, it still cause people uncomfortable, such as headaches, dry eyes, etc.when people receive 22mj/day(also has been recognized by Ushio, the famous manufacturer of 222nm uvc lamp in USA and has been reacted by our customers). So a lot of manufacturers develop a new version of 222nm uvc lamp with a automatic-switch mode to make sure people will not receive 22mj/day.

I have read that FAR UVC can destroy harmful viruses and bacteria, AND is safe for humans and animals. Why is far UVC not available for use yet?

Sometimes we have to be careful what we wish for. We might get it.