Researchers from the University of New South Wales in Sydney, Australia, have developed a soft robotic fabric gripper inspired by the trunk of an elephant.

The device, which includes a real-time force sensor that is 15 times more sensitive than commonly used force sensors, is capable of retrieving, gripping and releasing objects that are fragile without inflicting damage on them. As such, its developers believe the device would be ideal for industries where fragile objects are handled such as the food, agriculture, exploration and rescue applications.

During testing of a prototype of the device, researchers determined that it could lift an object 220 times its mass.

Study collaborator Professor Nigel Lovell said: "We used a manufacturing process involving computerized apparel engineering and applied newly designed, highly sensitive liquid metal-based tactile sensors for detecting the grip force required. The gripper's flat continuum also gives it superior contact with surfaces as it wraps around an object, while increasing the holding force. What's more, the total heating and cooling cycle for the gripper to change structure from flexible to rigid takes less than half a minute, which is among the fastest reported so far."

The device, which is expected to be available in the next 12 to 16 months, will likely be incorporated onto the end of robotic arms and is detailed in the journal Advanced Materials Technologies.

To see how the device mimics the trunk of an elephant, watch the accompanying video that appears courtesy of the University of New South Wales.

By posting a comment you confirm that you have read and accept our Posting Rules and Terms of Use.
Advertisement
RELATED ARTICLES
Elephant-trunk inspired robot gripper handles everything from boxes to needles
Highly-dexterous robotic end effector
Soft robotic hand can handle complex and fragile objects without causing damage
Robotic Grippers Take on Complex Industrial Tasks
Watch How Soft Robotic Fingers Get a Grip With Gecko Adhesives
Advertisement 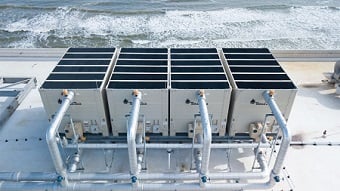