Elephant-trunk inspired robot gripper handles everything from boxes to needles

A soft, elephant-trunk inspired robot capable of gripping objects ranging from boxes to acupuncture needles has been developed by the researchers from the Korea Institute of Machinery and Materials (KIMM).

To mimic how elephants pick up objects by pinching them with their trunk tips, the KIMM researchers devised a robot featuring a pinch-suction fusion mechanism thanks to its soft structure, stretchable thin walls and wires that enable the robot trunk to change shape. 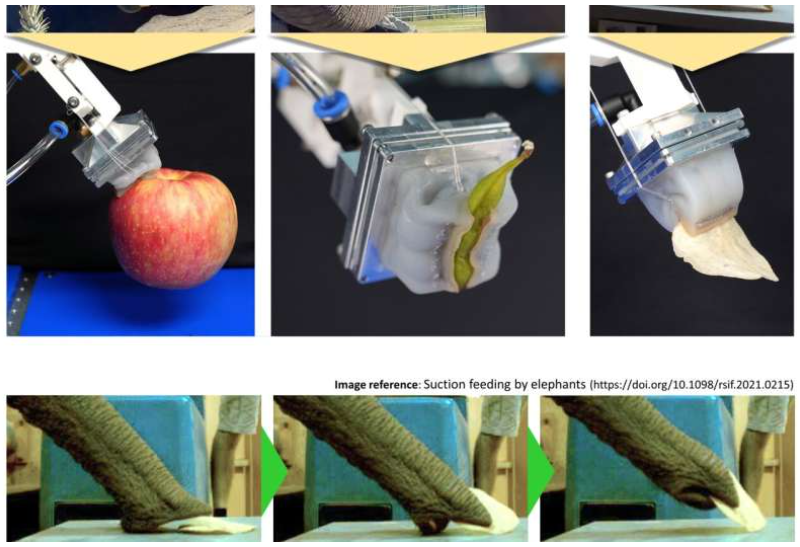 According to the KIMM team, the gripper’s soft structure is due in part to its series of microchannels that create an internal vacuum, which lets it attach to objects. The flexibility of the microchannels lets the trunk alter its shape to correspond to the objects the trunk encounters. As such, the soft structure of the robotic trunk behaves as a suction gripper, creating adhesive force to the surface of those objects.

In addition to being able to grasp objects as small as sewing and acupuncture needles, the researchers suggest that the robotic trunk gripper could be used for transporting or assembling objects. The robotic gripper even performed tasks in the lab such as wrapping gifts and arranging flowers.

Dr. Chanhun Park, the director of AI Robot Research Division at KIMM, explained, "Our newly developed elephant trunk-mimetic, pinch-suction fusion gripper, which uses both claw and suction mechanisms, is soft, so there is no risk of injury even when operating it around people. Not only can it handle objects of various sizes, from fine parts to boxes, without complex mechanical structures or sensors, but also it can be handled easily, which means it can be applied to various industries as well as daily life."

By posting a comment you confirm that you have read and accept our Posting Rules and Terms of Use.
Advertisement
RELATED ARTICLES
Watch a gripper robot that can handle food, tools
Robotic gripper mimics elephant trunks
Video: Soft robot can lift objects 100 times its weight
Watch a soft robot gripping system handle baked goods
Robot uses tentacles to hold objects in its grip
Advertisement