Prosthetics That Tune Themselves While in Use 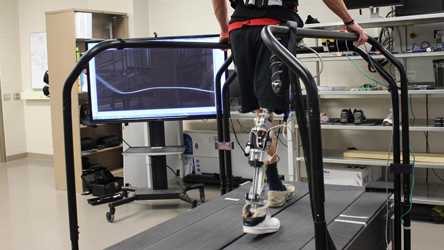 Biomedical engineering researchers at North Carolina State University and the University of North Carolina at Chapel Hill have now developed software that allows powered prosthetics to tune themselves automatically. Source: NCSUallows the prosthetics to tune themselves automatically. Not only are the devices more functional, they are more cost-effective to use, the researchers say.

The researchers developed an algorithm that can be incorporated into the software of the prosthesis to tune the amount of power a prosthetic limb needs. As such, a user walks comfortably even when his or her condition changes, as it would occur with a weight gain or loss.

"For example, the algorithm could provide more power to a prosthesis when a patient carries a heavy suitcase through an airport," one researcher says.

The automatic-tuning algorithm tracks the angle of the prosthetic joint while the user is walking and adjusts the amount of power the prosthesis receives in real time to maintain the proper angle. Research and testing continues.

By posting a comment you confirm that you have read and accept our Posting Rules and Terms of Use.
Advertisement
RELATED ARTICLES
Prosthetic hand combines user and robotic control
New Foot Prosthetic Creates A Natural Walk While Being Affordable
3D Printing Prosthetics on the Cheap
Study: Researchers Find the Perfect Power Setting for Transtibial Prosthetics
Just Like Real: Advances in Prosthetic Limbs
Advertisement