Researchers from the European Union’s (EU’s) Robo-Mate project presented their first prototype of an industrial exoskeleton at Fraunhofer Institute for Industrial Engineering (IAO) in Stuttgart in mid-June 2015. According to the group, the exoskeleton makes loads appear to be as much as 10 times lighter to lift.

Dr. Hans Wernher van de Venn, head of the Institute of Mechatronic Systems at Zurich University of Applied Sciences and Coordinator of the Robo-Mate project, says the prototype consists of modules for the arms, the body trunk and the legs. It works by supporting the user’s arms and legs as well as protecting his or her back and supporting posture. By means of motors and sensors, it reduces the effective load workers have to bear to a fraction of the actual load.

The Robo-Mate project’s goal is to develop an intelligent, easy-to-maneuver, wearable exoskeleton to enhance work conditions for load workers and to ease repetitive lifting tasks in an effort to reduce work-related injuries. The project consists of 12 partners from seven European countries, including players from industry and academia. 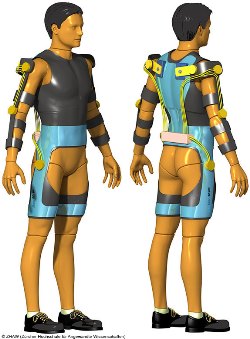 The EU's Robo-Mate project aims to develop an intelligent, maneuverable and wearable exoskeleton. Image source: Robo-Mate The technology at the heart of the project involves merging human-guided manipulators with computer-controlled industrial robots. If successful, Robo-Mate industrial exoskeletons could be adopted by a range of industries where heavy or repetitive lifting is required. In time, every industry may adopt some form of exoskeleton enhancement for improved safety and performance.

Skepticism about exoskeletons going mainstream may be understandable. The idea of exoskeletons has been around for a long time and the technology has always seemed right around the corner.

Indications are, however, that this time may be different. A convergence of medical, military and industrial research and development investment is driving the field forward like never before.

For instance, two weeks before the Robo-Mate prototype presentation, the U.S. Army announced that it was developing an exoskeleton for soldiers to automatically steady a soldier’s arm when firing a weapon. The Mobile Arm eXoskeleton for Firearm Aim Stabilization (MAXFAS) is equipped with accelerometers and gyroscopes that are attached to the soldier’s forearm and upper arm with Velcro straps. These devices detect minute arm movements then transfer that information to microchips where algorithms distinguish between involuntary and voluntary motions. A network of cables then pulls on the soldier’s arm to adjust and stabilize it. A test of the exoskeleton resulted in 14 of 15 soldiers shooting more accurately while wearing MAXFAS than without. Accuracy improved by 27% overall across the group.

MAXFAS was inspired by a medical exoskeleton—the wearable orthosis for tremor assessment and suppression (WOTAS). Tremor is one of the most common movement disorders in neurological medicine, and biomechanical loading has appeared as a potential tremor suppression alternative (IEEE Trans Neural Syst Rehabil Eng. 2007 Sep; 15(3): 367-378). The Army realized that reducing involuntary tremor also could improve soldiers’ weapons accuracy.

The medical industry is increasingly turning to exoskeletons to assist patients.

Take Nathan Kirwan, who is 85% paralyzed and intends to walk 55,000 steps during the summer of 2015 around Cork, Ireland, with the assistance of an exoskeleton called Lasarus. His story may be remarkable, but it is not unique.

In 2012, Claire Lomas made history by becoming the first person to complete the London Marathon using an exoskeleton. Claire was paralyzed from the chest down in 2007 during a horse riding accident. The ReWalk suit that she used in the Marathon is currently the only exoskeleton with U.S. Food and Drug Administration clearance, but may well change in the coming years. The exoskeleton system market is estimated to grow at a compound annual growth rate of 72.5% over the next five years, according to WinterGreen Research.

Medical exoskeletons are not confined to helping the disabled, however. Exoskeletons targeting rehabilitation are being developed. HARMONY, a two-armed exoskeleton that covers the entire upper body is designed to deliver physical therapy for stroke victims. It uses mechanical feedback and sensor data to track and adapt to the patient’s rehabilitation. The goal is to reduce recovery time and rehabilitation costs.

Despite their growing use for medical, military or industrial applications, a number of technological issues must be addressed in order to produce a viable technology. 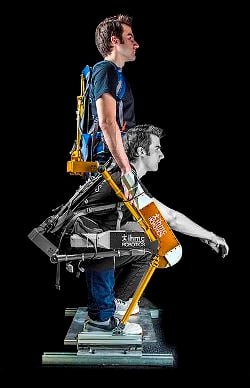 Engineering challenges include the power supply to drive an exoskeleton. Image source: Wikimedia Perhaps one of the most difficult problems facing designers is the issue of power supply. The current power supplies lack sufficient energy density to sustain a sizable exoskeleton for more than a few hours. One solution may be to use tethered power supplies that attach the exoskeleton by wire to a power source. This can be a practical solution for many applications, but limits mobility. Wireless energy transfer is a second possibility, but the technology is still many years in the future. On-board fuel cells and internal combustion engines have been considered, but heat complications along with potential fire hazards typically make these undesirable solutions.

Ultimately, the problem may solve itself. Battery power density has improved steadily in recent years and that trend is likely to continue. As a result, many engineers have turned their focus on making the exoskeletons lighter. As part of this evolution, prototypes are built using cheaper, heavier materials, such as steel. For production, the materials are shifted to strong, lightweight materials such as titanium or molded carbon fiber.

The actuators found at joints can be another opportunity to reduce weight and power consumption. This has led to the inclusion of geared servomotors and elastic actuators. Other technological hurdles include joint control and flexibility. Controlling unwanted movement and oscillation requires incorporating numerous sensors and motors. As software for controlling exoskeletons is developed and improved, the suits become lighter and more efficient, and better able to mirror human motion without pinching or joint fouling.

The EU Robo-Mate project had all these considerations (as well as user safety and cost) to consider in developing its prototype. Designers settled upon a modular design, with a core module for the trunk of the body. The core module is lightweight and strong; it protects the lower back from compression forces and could stand alone as an operational health and safety product. By adding arm or leg modules, the exoskeleton also could be adapted to specific tasks. Integrated radio-frequency identification and other types of identification sensors allow for more seamless interaction with the production process.

The widespread adoption of exoskeletons may be inevitable. Perhaps as soon as within a decade, exoskeletons may be seen with the same familiarity as night vision on soldiers or consumer tablets and smartphones. As a result, it may not be too long before millions of people worldwide are using some kind of exoskeleton device to make their jobs and lives easier. This time, the technology really does seem to be right around the corner.